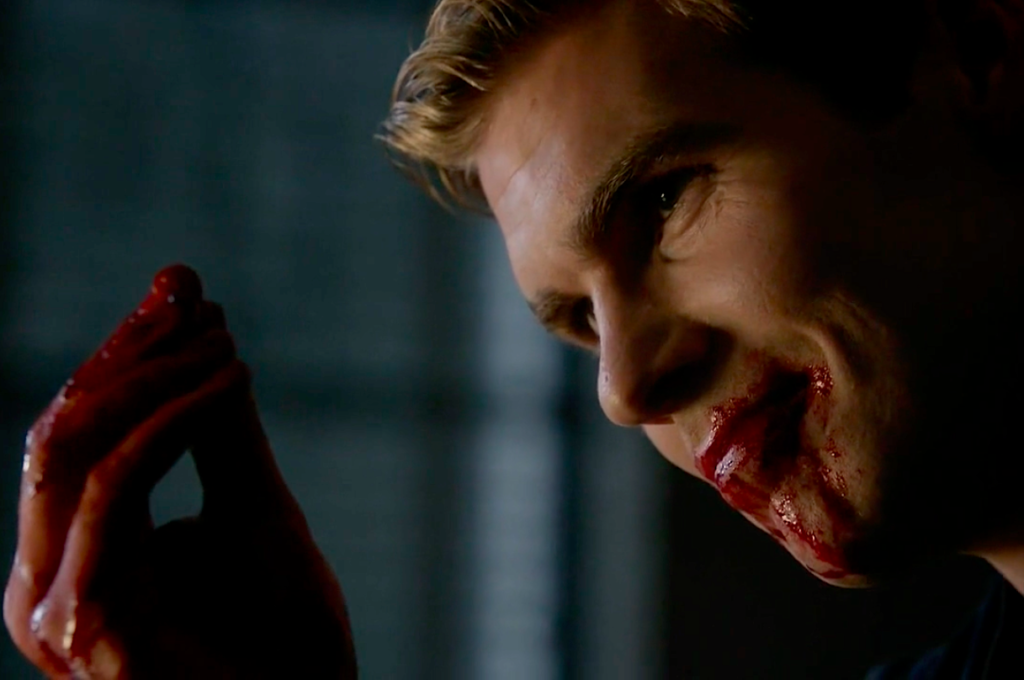 In “Sundowning”, our beloved wolfies frantically search for the friend they can’t remember. Subtle horror vibes and a higher proportion of character beats elevate the eppy above the two that came before it.

Our second string wolfies have been mooning over Mr. Douglas, who basically looks like Patrick Bateman with a Hitler Youth haircut. The latter spends his time getting high off gas canisters, Blue Velvet-style. So, demonstrably, he belongs in a gruesome parable set in the 1980s. At least as much as he belongs in a man-sized test tube surrounded by recently deceased Dread Doctors.

As far as the first string wolfies go, I’m enjoying Malia’s presence this season. (Although someone at this school needs to notice her off-the-charts test anxiety and give the poor girl some extended exam time. They don’t have to know it’s rooted in her coyote-ness.) In particular, I like what they’re doing with her and Lydia’s relationship—which might be a pleasant side effect of Stiles’s absence.

While the first stringers follow up on clues related to the scavenger hunt that is Stiles’s magically-erased life, Chris Argent and Actual Beacon Hills Superhero Melissa McCall get a little screen-time in at the hospital morgue. As usual, she deals with the supernatural world’s rubbish while receiving little more than a mug of coffee in return. Low-key heroism: a thankless calling. 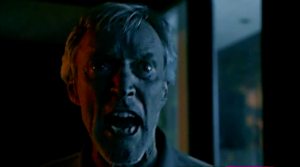 The scene introducing Elias Stilinski, hereafter referred to as Grandpapa Stilinski, effectively gives off an Overlook Hotel-type vibe—from the 70s geometric wallpaper to the 20s music filtering in from the old radio. In fact, all of the moments at the nursing home are excellent, culminating in Grandpapa Stilinski hurling a vicious insult about a grandson that no one else remembers. A strong button for a strong scene.

On the other hand, the Ghost Riders don’t even need to take Corey; his existence is erased from my memory every time he goes off-screen. I have genuinely asked “Who is Corey?” as many times as our protagonists ask, “Who is Stiles?” I’m not even sure why, but I swear to Lucy Liu I could not pick that poor boy out of a lineup of one. Luckily, I find Mason charmingly (and memorably) sweet, so those scenes aren’t a complete mind-wipe. And the use of Corey’s were-chameleon powers (a remarkable phrase I never thought I’d use) this season is innovative and adds an extra layer of mysticism to the story.

…Even if it is visually rendered with a bright green light the color of Nickelodeon slime.

Speaking of slightly mood-breaking visuals, I love how the Ghost Riders’ faces look like scarecrow masks made of petrified wood—but between the hats and the whips, they’re about one ophiophobic whinge away from Indiana Jones territory.

And now, a couple quick notes on the guest stars. If the woman who triggers Lydia’s auditory hallucination looks familiar to you, it might be from an Angel episode. As for recurring guest Gwen, horror junkies like myself may know her from her role as a young Jessica Lucas in Amusement. End of sidebar. 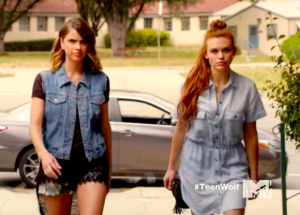 Overall, “Sundowning” was a step above its two predecessors this season, both in terms of pacing and characterization. I probably sound like a broken record, saying, “Needs more women, needs more women,” but here it comes again. Developing Lydia and Malia’s friendship as a central arc would serve the show well, just like it did in this episode. More Malia taking offense to anyone who would dare cast aspersions on Lydia. More Lydia demonstrating an unexpectedly strong understanding of Malia’s coyote side. Just…more. More!