This past Sunday I was presented with the incredible opportunity to conduct a short phone interview with two-time Oscar nominee Djimon Hounsou.

He’s currently promoting the Robert Kirkman film AIR, which also stars Norman Reedus and will be released later this week (August 14th). I was also able to watch the film, so stay tuned for my review, which will be up within the next day or two! But for now, here are the highlights of my ten-minute conversation with Djimon… 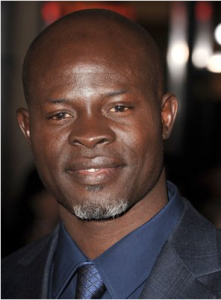 T: Did you do any research for your role as Cartwright – for example, about claustrophobia or oxygen deprivation, since the set and everything was less important than the mental stress of what they were going through?
D: The mental state was more challenging, and obviously was dictated by the claustrophobia…but…you don’t research those negative things. They’re going to be a negative part of your interpretation. You don’t research that other than the fact that it’s going to be the reality of your setting, anyway – it’s going to be the reality of your makeup of that day, those times, shooting that. So really there’s no need to know how claustrophobic it would feel to have a Hazmat suit on.

T: You’ve been in a lot of movies with large casts; what’s different about doing a film like this, with just a couple of people? 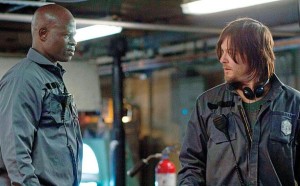 D: It’s really about those two guys, and the dynamic between Norman Reedus and myself…having to survive that environment. It was a great collaboration. Certainly having to collaborate with only one other performer…it was an experience.

T: Can you talk about some of the challenges in filming? Any behind-the-scenes anecdotes you can share?
D: One thing I do remember, vividly, is having to get into that suit and crawl into a very small, confined tunnel…not a comfortable environment.

T: I would classify AIR as something of a quiet thriller, but you’ve also been in quite a few action movies, including last year’s Guardians of the Galaxy. Do you have plans to stick with any one genre in the future, or do you like changing things up?
D: No…it would be a disservice to myself, to my own spirit. Why would I want to be confined to only one genre of filming?

T: How was your experience playing Caliban opposite Helen Mirren in The Tempest?
D: It was…very difficult filming that. It was a great challenge…certainly…not one that I would want to repeat anytime soon. The makeup itself, it required five to six hours of makeup a day, so…it was very very tough. Helen Mirren was unbelievably, a gracious, gracious costar. It was certainly…a wonderful setting, but again, it’s inevitable that it’s a very dramatic and challenging character to portray.

T: If you could portray any superhero, who would be your first choice?
D: If anything it would be Black Panther. But…I will be excited to see Black Panther come to life no matter what, because at this point we’re really raw, you know, the minorities of the world kind of need a superhero. So I’m looking forward to having Marvel bring that to life.

T: Are there any other projects you want to mention or talk about?
D: Next year I have Knights of the Roundtable coming out with Guy Ritchie directing, and I also have Tarzan with David Yates coming out. So those are two franchises, exciting as well. Other than [those], it would be Same Kind of Different as Me, which is a more independent film. It’s an artistic film with Greg Kinnear and Renee Zellweger.

I for one am absolutely looking forward to seeing all of the aforementioned films! And as I mentioned, stay tuned for my review of AIR…