This week’s Stevenbomb finished with “That Will Be All”, which opened right where yesterday’s “The Zoo” left off, and it did a great job of wrapping up these five episodes.

“That Will Be All” began with the amethyst who caught Steven and Greg in the zoo bringing them to a room full of more amethysts – and some jaspers as well – but at first I was confused about why they were all laughing. It didn’t help that there was a moment where it seemed as if “our” Amethyst had been caught, but thankfully she quickly admitted that it was all a joke – she was already buddy buddy with her fellow Earth gems, and all of this was just lovely and oh-so-Amethyst. 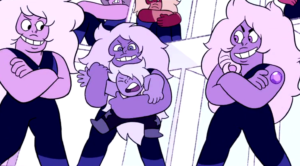 Another cool thing about this scene was seeing the tall, slim jasper – so different from the Jasper we’ve known – and even a carnelian, who was much smaller than the other Earth gems but still bigger than Amethyst (and very excited about no longer being the shortest one there).

Unfortunately this little reunion was interrupted by the arrival of Holly Blue, who immediately yelled at all of them for being gathered together because Blue Diamond was already back. She was especially nasty about the “hideous off-color betas” (the jaspers, that is), which makes me wonder if “our” Jasper was treated that way by any or all of the Homeworld gems she knew.

Steven and Greg were just barely able to slip out behind the amethysts, but once they escaped Holly Blue’s notice they still ended up in another bind – this time because they found themselves in a room of bubbled gems (rose quartz gems, to be specific) and that’s where Blue Diamond ended up. On top of that, she was soon followed by Yellow Diamond, who claimed to be there to bring Blue “back to reality”.

Basically, Yellow wants to destroy all of the rose quartz gems because Pink Diamond was shattered by Rose Quartz, but Blue doesn’t want to destroy them because the rose quartz gems are all they have left of Pink Diamond. Honestly, by taking a step back from what we as long-time viewers know, it’s actually not that difficult to understand both sides of this argument. That’s not to say that I agree with Yellow Diamond; just that I understand where she’s coming from. And anyway, “That Will Be All” proved that Yellow clearly isn’t as solid as she makes herself out to be – she ordered the Pearls to make Blue feel better by singing, and their little tune caused Yellow to break into a song that asked, “What’s the use of feeling blue?” And yet despite this song’s lyrics, Yellow was clearly breaking down at the end. She may not miss Pink in the same way Blue does, but she’s definitely not okay with their fellow diamond being gone.

However, her mask was back on soon enough, because Holly Blue showed up again (seriously, she had a habit of interrupting the best scenes in “That Will Be All”). There was a moment when I thought everything was about to fall apart, because Ruby and Sapphire were with Holly Blue, who explained that Sapphire was there to finish “the special delivery from Earth”, and of course we know that Blue Diamond didn’t request any such thing. But thankfully when Sapphire began to freeze up, Ruby was there to take her hand (be still my heart!), at which point Sapphire came up with the excuse that her future vision foresaw Blue asking her to go to Earth to get more humans for the zoo…and thankfully Blue immediately admitted that was true, that she wants more humans because “the window for preserving Earth’s specimens is closing”.

Now, for a moment I was a bit confused – what window? Not because I’d forgotten about the cluster, but because it’s contained, isn’t it? I honestly didn’t know that the diamonds had no way of knowing this, but obviously they don’t, because Yellow asked if the cluster had emerged yet. When Sapphire admitted that it hadn’t, Yellow consoled Blue by saying there was still time, and immediately dismissed Holly Blue…who, by the way, was in such rapture over the fact that TWO diamonds had come to visit the zoo that the Crystal Gems were almost able to get Steven and Greg onto their ship without her noticing! Seriously, between that and her outright terrible treatment of the guard gems and the pearls, I couldn’t get over how middle-management classist she was.

I mean, even when she DID notice Steven and Greg escaping, she immediately blamed it on the amethysts rather than herself! Thankfully not only did the Crystal Gems easily subdue Holly Blue, but when she threatened to tell the diamonds (who would then of course shatter the gems who messed up), Pearl intelligently pointed out that Holly Blue let them sneak in to rescue Greg in the first place. Faced with the fact that telling the diamonds probably wouldn’t be the best idea, Holly Blue essentially gave up, and “That Will Be All” closed with the guard gems waving goodbye to the Crystal Gems and Greg, who admitted that had to be “like the third craziest weekend I’ve ever had”. And in one last sweet moment, Steven apologized because “this all started because I wanted answers”, to which Greg replied that he hoped Steven found what he was looking for.

Steven being Steven, his answer was, “I did. I found you.” Now, if that doesn’t bring a smile to your face, I don’t know what would.

This Stevenbomb may be over, but Steven Universe will be back on February 10th, and I for one can’t wait!