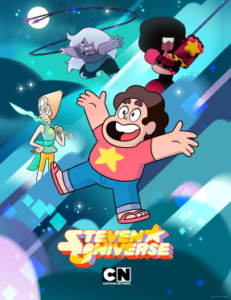 After a week’s worth of new episodes starting with back-to-back premieres on Monday, January 30 at 7:00 PM EST, Steven Universe returns to a weekly timeslot beginning Friday, February 10 at 7:00 PM EST.

Despite some snags along the way, Stevenbomb 5 is promising to be awesome as well as plot-heavy. It all begins with “Steven’s Dream,” in which Steven embarks on a quest for the truth after a mysterious dream.

The full week of episodes are as follows:

The fandom seems to skew in favor of weekly episodes, so we can hope this will mean good things for Steven’s ratings and longevity. There is no official news yet on the titles or content of the upcoming weekly episodes, nor how long the weekly schedule will last.

Despite a smattering of weekly episodes between the Summer of Steven and next week’s Stevenbomb 5, it has been a long time since we had a consistent weekly schedule. Friday night might be just right for the target audience (children), while being more accessible to the work schedule of its tertiary audience (adults). Plus, it’s a great way to end the week!

Things seem to be ramping up for Steven and the Crystal Gems (and Connie and Peridot and Lapis Lazuli and Beach City and…) Will he learn more about his mother’s complicated past? Will he learn the secret to healing the corrupted Gems? Will they ever win the fight and then go out for pizzas???

Tune in January 30 to find out.