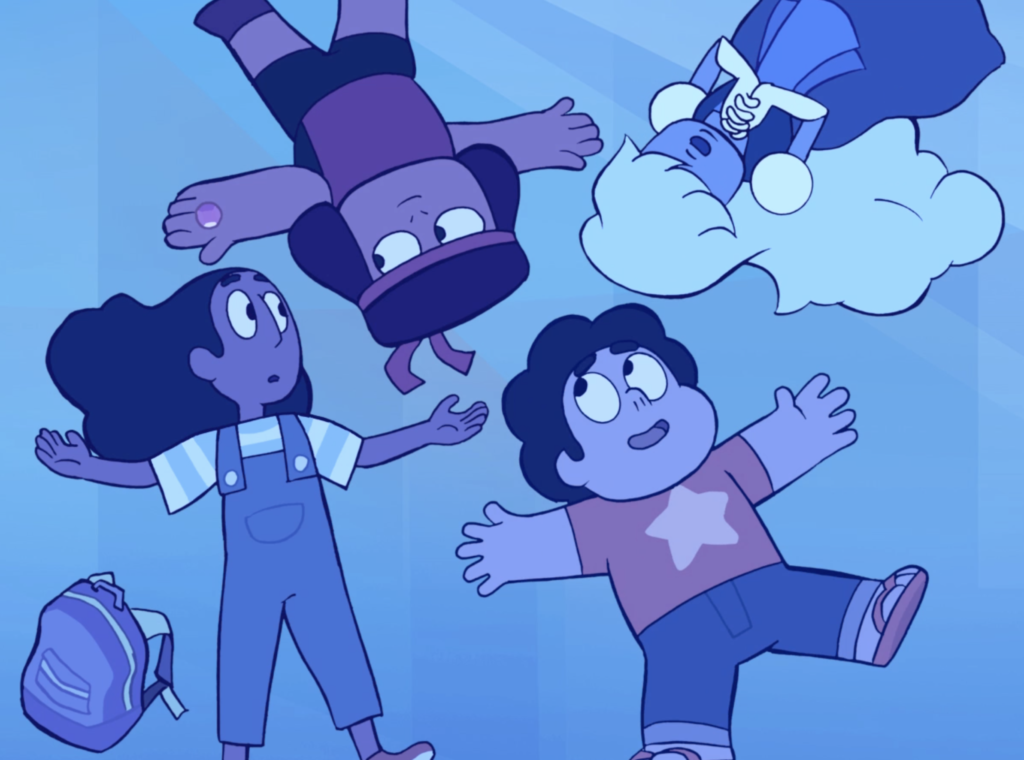 The Summer of Steven aka Steven’s Summer Adventure aka the Steven Nuke is finally behind us. 21 episodes in just one month, followed by a small string of weekly episodes, and now we’re back to hiatus again. Dare I say… I’m not displeased by this? The fandom needs some breathing room to process everything that happened this summer, because it was a lot. Especially for Steven, poor guy.

Here’s how The Geekiary ranks the episodes from the Summer of Steven. We’ve also linked to our episode reviews, if you want more in depth refreshers and analyses for each episode! 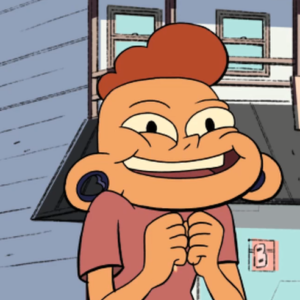 26) The New Lars
While certainly not the easiest episode to watch, one can’t deny that this body-swap episode was certainly interesting. Later episodes have shown that Steven learned his lesson about respecting others’ boundaries; but within the confines of “The New Lars” 11-minute run, that message was not properly conveyed, leaving Lars, the victim, as the butt of the joke.

25) Drop Beat Dad
It was great getting some more focus on Sour Cream, and his long-speculated relationship with his birth-father Marty, but this episode ultimately suffers from a rather predictable plot.

24) Restaurant Wars
With some off-the-walls comedy and a strange over-the-top story, the real meat of this episode was the wonderful antics of the various Boardwalk kids playing off each other. 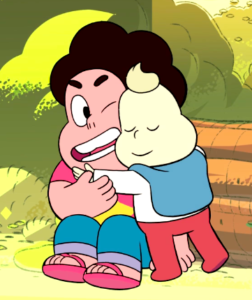 23) Onion Gang
Among the world-saving and near-death experiences, the show’s always known that it’s important for Steven to spend time with kids his own age — and now Steven’s realizing it, too. This was a strange, but sweet episode that put a real touching twist on Steven and Onion’s friendship.

22) Kindergarten Kid
Meep meep! Sure, this episode might have technically been a part of the ongoing saga of understanding the Gem monsters, and Peridot learning empathy, but the best part of this episode was the Looney Tunes-inspired physical comedy.

21) Future Boy Zoltron
Considering Steven spent the previous episode racked with guilt over those he could not help, it was a really lovely respite to see him able to don silver paint and give good advice to Beach City citizens. Plus, the first canon same-sex relationship between men onscreen is an awesome addition to SU’s stellar record of queer representation.

20) Steven Floats
As the first episode in the Summer of Steven, it was nice to see SU get back to its roots for a bit: just Steven, figuring out his powers, with the Gems in tow, helping (and sometimes “helping.”) There was also one of the first direct acknowledgements that Steven’s feelings for Rose are “complicated,” and considering the episodes that followed, it was quite appropriate that it happened at the beginning of the event. 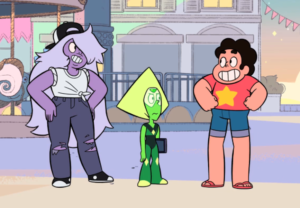 19) Too Short to Ride
There is a lot of love in the SU fandom for the Amethyst x Peridot pairing (or “Amedot” if you’re savvy). It was nice to get an episode where they actually got to interact without other Gems around besides Steven. There are a lot of interesting parallels between Peridot and Amethyst, and “Too Short to Ride” gave us one more important big one: Peridot is “defective” and very insecure about what she isn’t capable of.

18) Kiki’s Pizza Delivery Service
The Summer of Steven gave us a lot of added insight to Beach City citizens, and of all the boardie episodes in the Summer of Steven, this one was perhaps the most fun. While it was rewarding to see Kiki confront her anxieties and mend her relationship with her sister, it was nice just getting to see Steven and Kiki hang out and be ‘dream warriors’ together. Plus, on the heels of “The New Lars,” it was important to see Steven learned his lesson about respecting people’s boundaries when it comes to entering their minds.

17) Buddy’s Book
In a show where flashback episodes are usually serious, or at the very least, instrumental to the plot, it’s nice to have one which was so… incidental. We had a chance to see this universe from the point of view of a random human who lived centuries ago, seeing familiar characters in a slightly different light. Plus, Connie and Steven hangouts always promise a fun time, and this didn’t disappoint. 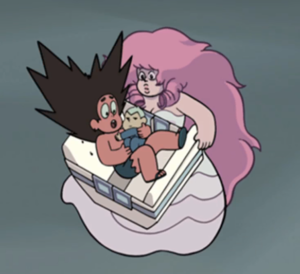 16) Greg the Babysitter
It’s so rare to see Rose in person, and this episode felt like a feast of actual concrete character for her. She’s kind and she loves fun and she craves the change that humans and other earthlings get to experience throughout their lives. She also isn’t super aware of “consequences” to her actions, and her flaws are as important to recognize as her better qualities. Plus I mean, whoever gave baby Sour Cream a deep old man’s voice, kudos. That was amazing.

15) Beach City Drift
Stevonnie was back for an extended period of time to give us an important lesson: you cannot expect to find closure in the arms of your abuser. It must come from within. So we were treated to this serious life lesson wrapped in a car racing Anime tribute format, and that’s so very awesome, and so very Steven Universe. Composers aivi & surasshu practically invented a whole new genre of music for “Beach City Drift” as well – incredible!

14) Beta
“Beta” is divided into two parts: the beginning is Lapis and Peridot and Meepmorps and just, everything we could have ever wanted from this ragtag duo getting to know each other and the planet-away-from-Homeworld they’ve been somewhat forced to settle on. They watch Camp Pining Hearts together! Peridot checks in with Lapis to make sure she’s okay! And the Meepmorps, did I mention the meepmorps? But every good thing must come to an end, and the second half of “Beta” is about the other Earth kindergarten. Here we found out that Jasper is Amethyst’s foil: she’s the perfect Quartz from the defective kindergarten, a reverse of Amethyst’s own origins. It’s pretty neat, even though that cliffhanger was painful. 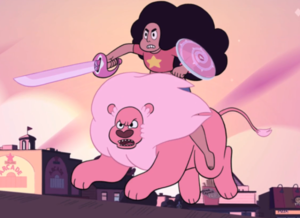 13) Crack the Whip
It was a true joy getting to watch Steven and Connie spend a day chilling on the boardwalk with Amethyst — shame Jasper had to come and ruin it. On the bright side, we finally got Stevonnie rocking both sword and shield. On the downside, Amethyst got another helping of crippling self-doubt.

12) Gem Hunt
In retrospect, this is really just a building episode, focusing mostly on laying the foundation for things to come — but that foundation is hugely necessary. With an ominous Jasper, Pearl performing at peak mom, and wonderful Jam Bud shenanigans and team-work, this episode really is a delight to watch.

11) Back to the Moon
There was no way that a title like this wasn’t going to pay off, and boy did this ever. While most of the episode may have been spent on shape-shifting and Ruby shenanigans, the reveal of Rose Quartz having murdered Pink Diamond, and the suckerpunch of Steven getting pulled into the void of space sure left a lasting impact. 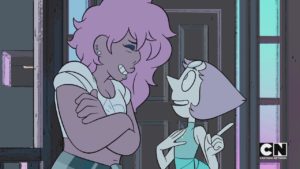 10) Last One Out of Beach City
Wacky Lesbian Mom Road Trip. That’s an accurate summary of this episode, and that alone is beautiful. Dorky, overexcited Amethyst, voice-of-reason Steven and “bad” Pearl alone would have been enough to make this one a winner, but add in Pearl getting  The Mystery Girl’s number? Nice.

9) Know Your Fusion
Listen, if you had told me there would be a delightfully meta episode of SU wherein Sardonyx interviewed the fusion of Amethyst and Steven in her room which doubled as a late night talk show stage? I would have laughed in your face and asked for the link to that fanfiction. Yet it’s real, and it’s canon, and it’s glorious. The Crystal Fam got to know each other better, even after a rocky start to their interactions.

8) Alone at Sea
Abusive relationships, manipulation, and recovery are not easy topics to tackle, yet Steven Universe does, and with a deftness that is frankly impressive. Watching Lapis deal with past trauma is not easy — but it makes it all the more rewarding when she manages to confront her past and say no when Jasper asks her to fall back into old, destructive habits again.

7) Steven vs Amethyst
At first glance, Steven seemed like a pretty ordinary cartoon protagonist, well-meaning but clumsy and annoying. And initial impressions may have suggested that Amethyst was a pretty typical fun ‘party’ character — rude and brash, if secretly sweet. But they’re both characters with incredible depth and complexity, and this episode spotlights it spectacularly. It’s a culmination of both characters’ developments, while promising further growth for the future. 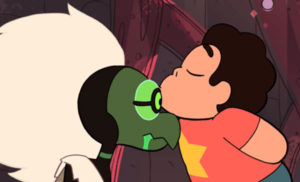 6) Monster Reunion
If you’d told me after I’d first watched “Gem Glow” that its monster-of-the-week was going to be a recurring character, I would have raised my eyebrows, but I would have accepted her as some sort of villain. Instead, Centipeetle is a hugely compelling character — an alien veteran, dealing with the trauma of war and physical disability, trying to remember who she is. While some of this episode is downright painful to watch, it doesn’t allow itself to get bogged down in the grimness, instead delivering a hopeful narrative of friendship and recovery.

5) Bubbled
Quiet, introspective, and nerve wracking — “Bubbled” takes a very different approach to a season finale. Difficult moral dilemmas set against the vast and breathtaking backdrop of space, this episode forced Steven to truly confront his mother’s darker choices, and begin to consider what he’d do if ever put into a similar horrible position. 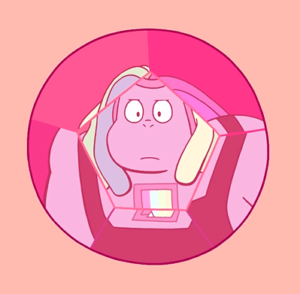 4) Bismuth
The writers used their first full twenty-two minute episode to pack in as much as they could, and they succeeded spectacularly. Bismuth was an amazing new character, with true weight and history to her, and it was a delight to see how she played off the rest of the cast. They managed to make the conflict between her and Steven, and their opposing ideologies, truly heart-wrenching. The only reason this episode isn’t higher on the list is because of the constraint of forcing Bismuth back into her bubble so quickly, cutting away — or at the very least, delaying — what could be some truly fascinating storytelling.

3) Earthlings
Between the long-awaited Pink Diamond backstory, Jasper getting corrupted, and the debut of Smoky Quartz, this episode certainly was explosive. The fusion between Amethyst and Steven is everything we could have hoped; hilarious, energetic, fully embodying the pair’s arcs and character relationships. 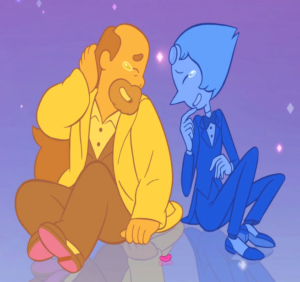 2) Mr Greg
Eleven minutes. Seven songs. Three tuxedos. Two ex-wives of a mighty alien warlord, needing to find common ground. One small half-human boy there to help them figure it out. Lots and lots and lots (and lots) of tears. What a masterful piece of media. What an emotional ride. What a beautiful episode.

1) Mindful Education
This show’s greatest strength is how it builds on itself, weaving an intricate narrative of characters, plot and theme to create an elegant narrative, and this episode is the pinnacle of that. Here, so many elements come together– Ruby and Sapphire’s love, Garnet’s quiet mentorship, Connie’s anxieties, Steven’s deeply buried fears, and above all else, the pair’s incredibly strong bond. The episode will always be remembered for “Here Comes a Thought”, the lovely Garnet-and-Stevonnie duet featuring some of the show’s most spectacular visuals, but for me the true standout scene is Stevonnie’s final breakdown falling off the sky arena as they’re forced to confront their past traumas and accept them.