Some fans of Steven Universe believe that the show has no true, or at least no good, villains. There is a larger conversation to be had about why that is, about redemption and love and relationships, but for now, those who feel that way have Marty. 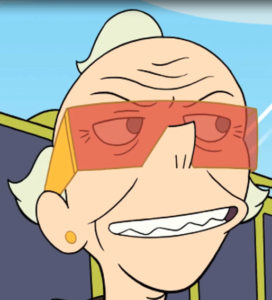 Farty Marty, the titular “Drop Beat Dad” from the second episode of Steven’s Summer Adventures, is back. Marty is just as pointy-teethed and twice as mean as the last time we saw him in “Story for Steven”. This older design certainly reflects his dastardly insides, with terrifying wrinkles and flashy gold accessories. If his design and his slimy rhetoric wasn’t enough to queue the audience that Marty is a Bad Dude, like usual, Steven’s initial reaction to Marty is the correct one. He is unimpressed with Marty’s smooth-talking and his treatment of Sour Cream.

There aren’t really any filler episodes in this character-driven television show, but if anything qualifies Drop Beat Dad does. This does not mean it holds no greater place in the larger Steven Universe canon. For one thing, Drop Beat Dad is a reminder to Steven that sometimes he’s right about feeling wrong about people. For another, the Yellowtails are a human parallel to the Crystal Gems’ found family storyline. Sour Cream might have been calling Marty a clod in his stepfather’s language, just as Peridot did her bully, Yellow Diamond. 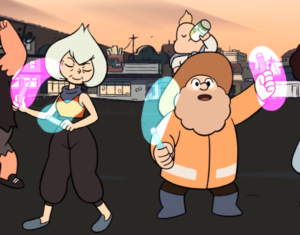 Although Steven plays support to Sour Cream in this episode just like the roadie he aspires to be, there is still character development for our favorite half-Gem in Drop Beat Dad. Steven’s gut reaction to Marty was correct, but he was easily bribed by the “official roadie” lanyard, and tried to see the best in a character who had already given Steven several reasons to know he was no good. This is an ominous sign for Steven going forward, when he is going to face much bigger threats to Earth than Farty Marty. It is unlikely that the Diamonds’ best weapon will be Guacola and unfortunate hairlines.

It was also emphasized twice in Drop Beat Dad that Steven’s physical strength is extraordinary for a boy his age, or even for a human at all. The Crewniverse has been dropping other hints about this particular power since very early episodes. Coupled with the new floating power Steven mastered in the first part of the Steven Summer Adventure event debut, Steven Floats, one has to wonder if these back-to-back breathers while Steven levels up are setting us up for Steven versus Something Big.

Previous:First Picture of Bilquis from American Gods
Next: FEELINGS…with The Geekiary: GHOST GIRLS