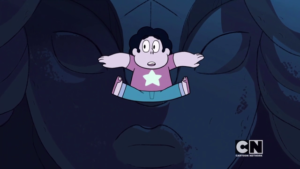 In Steven Floats, our cast finally returns to Beach City, and Steven is excited to go to the Big Donut first thing the next morning. Unfortunately, a new power manifests, and Steven finds himself stuck drifting slowly through the sky.

It’s been a long, long time since we visited Beach City.

Well, not actually that long, in the grand scheme of things. Eleven episodes. A significant stretch, to be certain,but considering that the last episode really focusing on the boardwalk and its inhabitants aired in September 2015, it really does feel like we’re returning home after a long, exhausting trip. The episode was written anticipating this reaction, and it feels like the human cast is welcoming us back with open arms. 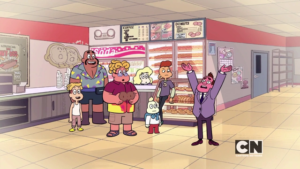 The only human character we actually see in this episode is Sadie– sweet and witty as always– but through Steven’s imagination we got a great recap of all the other characters we’ve been missing, from the pompousness of Mayor Dewey to the enigma that is Onion. After such a long time focusing on the Gems, this feels like a deliberate shift, as if to say ‘okay, time to focus on Steven’s human half for a while’.

Which is interesting, considering the main crux of this episode centers around the development of a new Gem power for Steven. Each of Steven’s powers has signified some sort of emotional growth. This particular power helps mark the emotional clarity that Steven’s developed over the past two seasons. He’s always struggled to control his powers, but now he has the introspection to understand how they work. We’ve seen Steven becoming steadily more confident with his abilities, but here we see him really thinking about them aloud and working through their mechanisms.

Steven’s floating powers are certain to come in handy. The ability to essentially fly is very helpful in tough situations. The issue will be controlling it. Steven’s a kid who wears his emotions on his sleeve, and while nearly always cheerful, wh 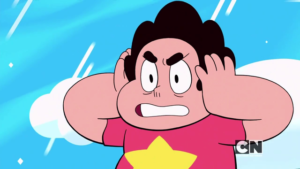 en he becomes genuinely sad or angry, he has a lot of trouble breaking out of it. This is why I suspect the floating powers will actually be best utilized in battle by Stevonnie– they might just be the one with the emotional balance to control it in tight situations.

One of the most fascinating moments of the episode was actually a line played (mostly) for laughs. When trying to recall something which makes him happy, Steven thinks: “My Mom? Oh geez, those feelings are complicated!” It was an idea first directly touched upon in An Indirect Kiss, and since then, his feelings for Rose Quartz have only grown murkier. Back then, Steven simply didn’t know how to feel about his Mom— everyone else loved her, but he’d never even met her. Since then, he’s gained a more complete picture… but at the same time, also understands better the emotional toll her departure caused. He’s seen Amethyst lash out at Greg, seen Pearl brought to breaking point, even seen Garnet laboring under the weight of leadership. At the same time, he’s pestered by questions of his own identity; to what degree does he function as an individual separate from his mother? He literally pushes these questions away, but there’s no doubt that he’s going to have to address them eventually.

The true emotional core of Steven Floats is his relationship with the Gems. After the giant kaiju fights, Earth-shattering dangers, and the introduction of two new members to the team, the writers took the time to put the focus back on the show’s heart: Garnet, Amethyst, Pearl, and Steven, together. There are so many cute little 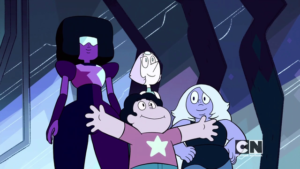 moments in this episode about the bond they share– Garnet playing chess with him, Amethyst’s playful support, Pearl carefully draping a coat over him– that remind us about how wonderful these four are together, and how much they’ve developed since the first episode.

Overall, Steven Floats was exactly the episode we needed at this point in Steven Universe. Perhaps it won’t be topping anyone’s list of favorites, but it was still a strong outing for a single boarder (Paul Villeco), boasted some very necessary fluff, and was overall an excellent callback to the show’s roots.

Previous:Ghostbusters Scores a $46 million Debut at the Domestic Box Office