Move over Gravity, sorry Interstellar, a children’s cartoon show just accomplished in eleven minutes what you took entire movies to do. “Bubbled” was a breathtaking, brilliant episode of television. 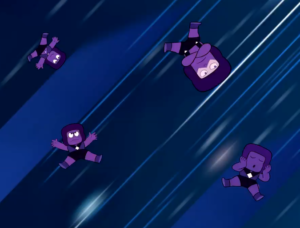 “Bubbled” was conceived of and written as the finale of season three, and it could not have been more different than “Jail Break.” It also had parallels to “Bubble Buddies,” an early episode where Steven became trapped in his bubble with a stranger. “Bubbled” was like neither of them. This wasn’t an episode filled with large scale fights, musical smackdowns or heart-warming new friendships. This was two people, together, with nowhere to go.

Before we got into the heaviness of “Bubbled,” we were treated to some space hijinks with Eyeball and Steven. Eyeball adjusted her mass to the planetoid of Steven’s bubble as Gems are wont to do, and they bounced around the asteroid field like a game of interstellar pinball.

Not counting moon base trips, “Bubbled” is Steven’s first foray into the depths of space. It’s too bad it couldn’t have been under better circumstances, but the views were still extraordinary. The blue-green glow of Earth as it faded into darkness. The swirls and eddies of stars against the inky blue-black of the void. The pink tinge through which Steven saw it all, the bubble that kept him safe, that saved him.

The bubble of the mighty Rose Quartz. 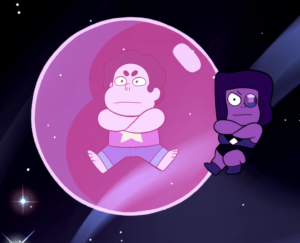 First, Bismuth proved to Steven that his mother, even though she could not go through with the Breaking Point, was willing to lie to those closest to her for millennia. Then, Jasper, still thinking he was Rose, screamed, “what you did to my Diamond!” Soon after, the very Ruby Steven ended up stuck in a bubble which confirmed the worst: Rose Quartz shattered Pink Diamond. That’s a lot to process for a half-human little boy who already has complicated feelings for the Gem who died so that he could exist. Not to mention this all happened in one day— throughout “Bubbled,” Steven’s shirt still has the tear Jasper gave him in lieu of accepting his healing help back in “Earthlings.” He’s exhausted, physically and mentally. Yet despite everything, Steven tries his very hardest to reach out to Eyeball. Tries to comfort her, to give her what she wants, to save her from the asteroids, to heal her cracked Gem, to reason with her… and still, he’s left in a brutal fight for his life, and has no choice but to throw her into the empty void of space. Steven may win, but it does not feel like a victory.

Eyeball and Jasper are intriguing foils. Both veterans of Rose’s Rebellion, both affected deeply by what Rose Quartz did to Pink Diamond. Interesting, then, that it was Rose’s shield that made Jasper believe Steven was Rose back in “The Return,” where what Eyeball remembered was “her huge sword.” Also unlike Jasper, Eyeball accepted Steven’s healing powers, and that was ultimately what made her believe Steven was Rose, and was Steven’s undoing in “Bubbled.” Literally, in order to access the knife within her Gem’s pocket dimension Eyeball planned on using to pry the rose quartz gem out of Steven, Ruby had to have been healed. Is this, then, finally a lesson for Steven not to trust everyone implicitly? 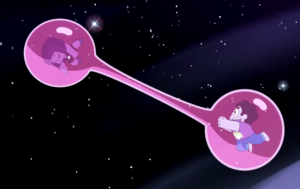 Somehow, I think not. Eyeball is going to realize that Steven could have at any point left her to float forever, but chose instead to take her into his bubble and heal her. It was only when she gave him no choice that he blasted her into space. No matter how many Gems cannot tell the difference, Steven is not Rose Quartz. The bigger question for me is how the Rubies will be reintroduced to the narrative. Surely if they came back once, their part in Steven’s story is not over yet. Too much time has been spent making them sympathetic characters to leave them hanging (literally) forever.

Once rebubbled, the pink layer shrank around Steven, cold and curled in the fetal position, alone with his thoughts about Eyeball, his mother, and himself… forever. How cruel, that this child of space travel would perish among the stars that were the symbol of the rebellion to which he owed his existence.

But then… light. The Rubies’ ship. The Gems had found him.

Steven Universe can make you cry for so many reasons. But this magnificent ending, while “Love Like You” plays over the scene of the Gems reuniting with Steven, crying, laughing, holding desperately on to the family they have made with each other… “Bubbled” is a truly special episode. And it was not over yet.

Steven: How come nobody told me about Pink Diamond?

Garnet: We all did what we had to during the war. Everything’s different now.

Steven: But did mom really do it? Did she really… shatter her?

Garnet: She had to. The Earth belonged to Pink Diamond. Destroying her was the only way to save the planet. For Amethyst to be herself, for Pearl to be free, for me to be together. For you to exist.

Steven: But I thought… at least she’d never…

Steven: Even if it meant shattering someone?

Steven: Thanks for telling me.

Steven Universe is too well-written a show to hope that Steven will never have to face a similar decision. He has been given an impossible burden by Rose Quartz, but he’s not going to do it alone. 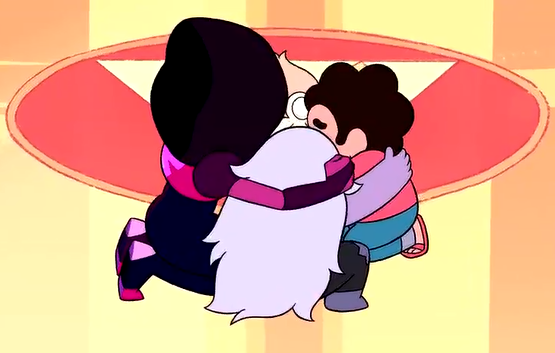