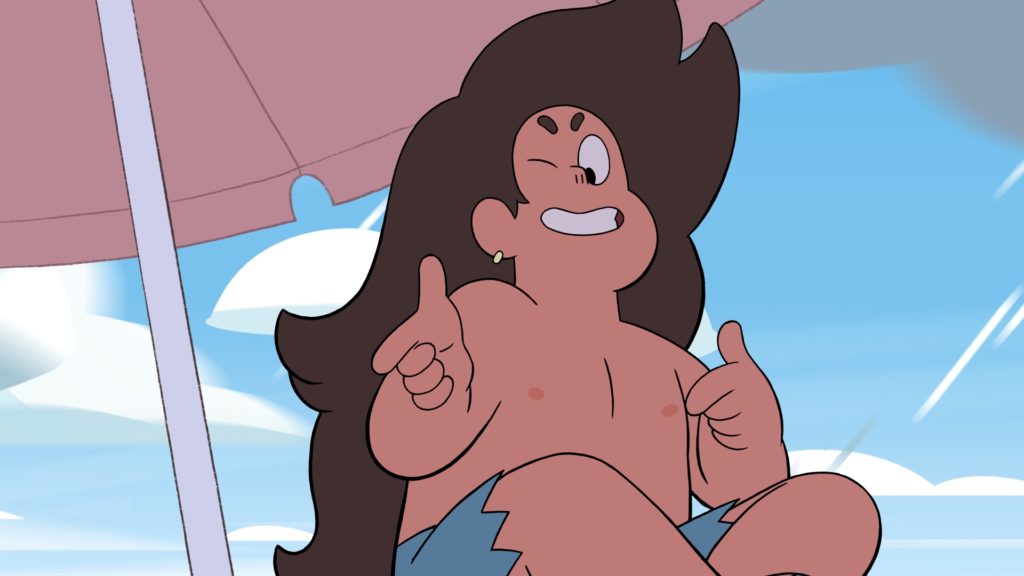 We’ve had two previous flashback episodes to the time before Steven was born, and while “Greg the Babysitter” might not have been as romantic or emotionally tense as the others, it provided us another glimpse into the development of Greg and Rose’s relationship, and their development as people. 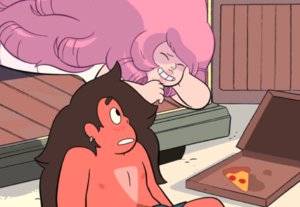 The initial impression viewers of Steven Universe may get of Greg is something of a stereotypical layabout dad: a washed-up rock star living in his van and working a dead-end job. Steven Universe subverted this stereotype by showing Greg to be a talented musician, a caring dude, and a dedicated father. That doesn’t mean he was always this way. As these flashbacks show, while young Greg was a pretty nice guy, he also had his own set of flaws. A bit too romantic, a bit too naive, and as this episode shows, way too immature. This is a Greg who will happily sit around a single mother’s house, eating her food, making messes, and not even say sorry.

Rose, too, still has a lot of growing until she becomes the person we got a glimpse of in her videotape to Steven. We saw previously how Rose used to have a romantic but simplified view of humans, like cute little animals she could adopt and play with, but lacking the same emotional depth of Gems. In “We Need to Talk” she and Greg had their first serious conversation, and she finally began to view him on a similar level. These changes cannot happen overnight, however, and we can still see that relationship imbalance approximately a year later. This is a Rose who seems genuinely infatuated with Greg — yet is also content to watch him get sunburned or climb to the top of a Ferris wheel. She could help, but she doesn’t really see why she should. “It’ll be a formative experience,” she says. One can imagine how that was a helpful attitude towards, say, a younger Pearl, where she could encourage her jumping into dangerous situations, with healing tears and Gem regeneration abilities to keep her from harm. But a human baby — and humanity in general — is quite another story. 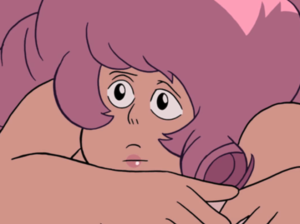 We also revisited what the writers seem to be setting up as Rose Quartz’s major flaw: communication. We already know that Rose lied about many things. We also know that while those lies were often well intended, they did end up hurting the people she loved. The issue seems to be a lack of empathy on Rose’s part. Nothing malicious; she simply has trouble reading and understanding others. Anyone could tell, plain as day, that Pearl was uncomfortable with her and Greg’s relationship — yet it appears that the two of them may never have had any serious conversations about it. In this episode, Rose can tell that Greg seems tired and distressed, but mostly seems amused, not concerned. She must know, intellectually, that Greg doesn’t have money, and humans need money to buy food, and humans need food to survive — but she never puts this all together to realize her boyfriend (?) is practically starving.

She got better though. We know that. And since these flashback episodes seem to be becoming a regular feature, I have little doubt that we’ll get to see exactly how that happened. It is refreshing in general to see so much of Rose, in the flesh (so to speak), instead of through worshipful stories from the Crystal Gems. The line between Greg’s narration and the story itself is probably intentionally blurred, but I wonder if Steven picked up on Vidalia’s contempt of Greg’s similar blind adoration of his “space goddess.” We have been guessing that some hard truths about Rose are coming up, and this might be one more indicator that Steven needs to evaluate multiple sources to know what was up with his mom. 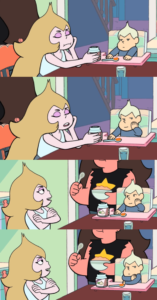 Although Rose Quartz will probably get the most analysis from “Greg the Babysitter,” we all know who the real MVP of the episode was: baby Sour Cream. His design, his voice, when he imitated his mom, his sly grins — please, Crewniverse, I would not be mad if you made baby cameos a regular occurrence on Steven Universe. We even got baby Gems in the classroom short “How Gems Are Made,” even if the context was telling us how not-canon they are, a point Rose reiterates in this episode: “When a Gem is made it’s for a reason. They burst out of the ground already knowing what they’re supposed to be and then… that’s what they are. Forever.” The motif of “change” was certainly strong throughout “Greg the Babysitter,” from Greg’s delightful ditty to Rose’s beach speech. Although we did get a lot of Rose, the reason she would have been so desperate to change (to the point of, say, being reborn as a human boy…) is still shrouded in mystery. What were your sins, Rose, and why were they so great you felt like you’d never achieve redemption?

While watching any new episode of Steven Universe, I ask myself, “how does this come back to Steven, the character?” He is beyond the protagonist; he is the emotional core, the audience surrogate, and the one at whom most of the show’s morals are aimed, on some level or another. An episode about Greg and Rose like “Greg the Babysitter” is going to give us delightful superficial connections to Steven all over the place (I wonder if Mr. Smiley’s predecessor banned Rose Quartz from Funland?), but on a narrative level, what is going on? “People grow whether they want to or not, but growing up is something you gotta decide to do.” We’ve just been hit with two weeks’ worth of Steven getting more and more comfortable with his powers, both magical and mundane. The season 3 finale looms. Steven does not age like humans, he does not “age” like Gems. So what is going to happen to make him decide to grow up? I fear for Steven. But I believe in him, too.