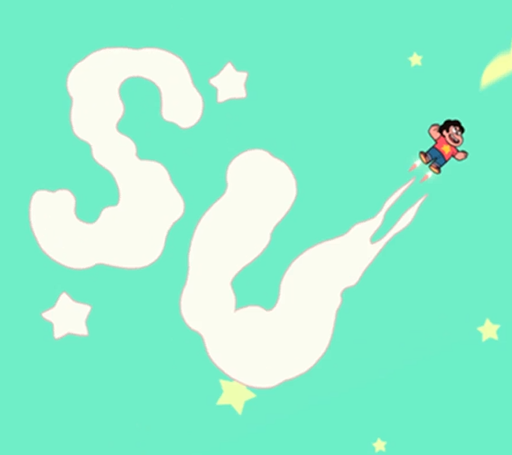 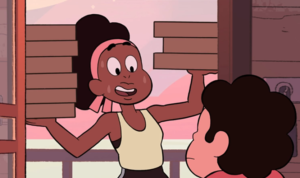 “Kiki’s Delivery Service” ticks off at least two storytelling techniques that the Crewniverse has honed to an animated science: fleshing out a previously background character Simpsons-style and creating a world-within-a-world setting that mixes human and Gem elements to make it uniquely SU. This is especially impressive considering that the episode also marks the addition of a new storyboarder, Colin Howard, who obviously works well with old staple Jeff Liu.

We’ve had a few episodes digging into some of Steven’s previously established human relationships, but now we’ve had a chance to see more development in the friendship with someone who hasn’t seen much of the spotlight before now – Kiki Pizza, along with her sister Jenny. I’ve always enjoyed what little glimpses we’d previously gotten of her up until now, and “Kiki’s Delivery Service” didn’t disappoint: Kiki is sweet, funny, and all around adorable. 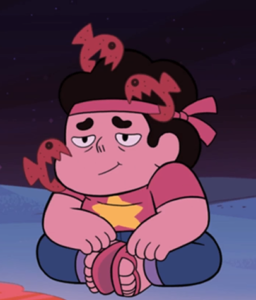 She’s also hardworking and eager to please, and subsequently, the kind of person who has trouble saying ‘no’. As someone who hates conflict, I empathized keenly with her in this episode. She loves her sister so much, and doesn’t want to disappoint her. But Steven Universe has always maintained the moral that relationships are a two-way street, and that communication is key. Jenny may have been taking advantage of her sister’s loving nature, but not out of deliberate ill-will. A simple, serious ‘twin talk’ was all it took for Jenny to see her sister’s point of view.

And we also see Steven’s maturity and understanding on display yet again (alongside his juvenile joy at getting to be a ‘Dream Warrior’). While it was great to see how willing he was to help Kiki with her bad dreams and how deftly he handled the issue, what I actually thought was most telling was the moment when he realized dream!Kiki was real!Kiki. In “Chille Tid” and “Super Watermelon Island”, Steven saw little problem with entering people’s minds and taking over their bodies if the situation called for it. In “The New Lars” he initially vowed that he’d respect Lars’s privacy, but his childish understanding of the teenager’s life meant that this didn’t work out in practice. Here we see that Steven truly has learned from the events of that episode. When he finds out he stumbled into Kiki’s dreams, he’s immediately horrified and apologetic, and only goes back in after being given enthusiastic consent. Shout out to Beach City Citizens’ easy acceptance of Steven’s magical powers. 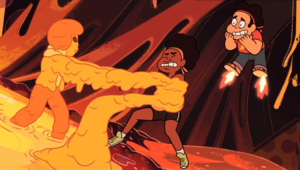 Major props must also be given in the real world to Reagan Gomez-Preston, who manages to give both Pizza twins distinctive voices and nailed the gooptastic comedy-horror of Pizza Nightmare Jenny. The design of Kiki’s dreamscape in general highlights the best of the Crewniverse’s efforts – an expansive, visceral setting, like a twisted version of Rose’s Room. Plus, it left me simultaneously disgusted and craving pizza. It’s really great to be reminded how much care and love goes into building the various worlds of Steven Universe, even when the stakes are as low as sibling rivalry rather than those of intergalactic supremacy.

Because “Kiki’s Delivery Service” was an episode that focused on Kiki and Steven’s relationship, the puns were fast and fresh from the oven. With the track record of jokes on Steven Universe, I have to wonder if an excess of pizza puns in the writing room was the whole inspiration for the premise of “Kiki’s Delivery Service” in the first place! Personally, no pun will make me laugh harder than Steven deadpanning that Sour Cream’s “beats are pretty dirty.”

Considering tomorrow is “Monster Reunion” (which hints at the return of Centipeetle), “Kiki’s Delivery Service” might be the last episode in the Steven’s Summer Adventure event that’s a Beach City breather. It’s not cheesy if you want to savor it.