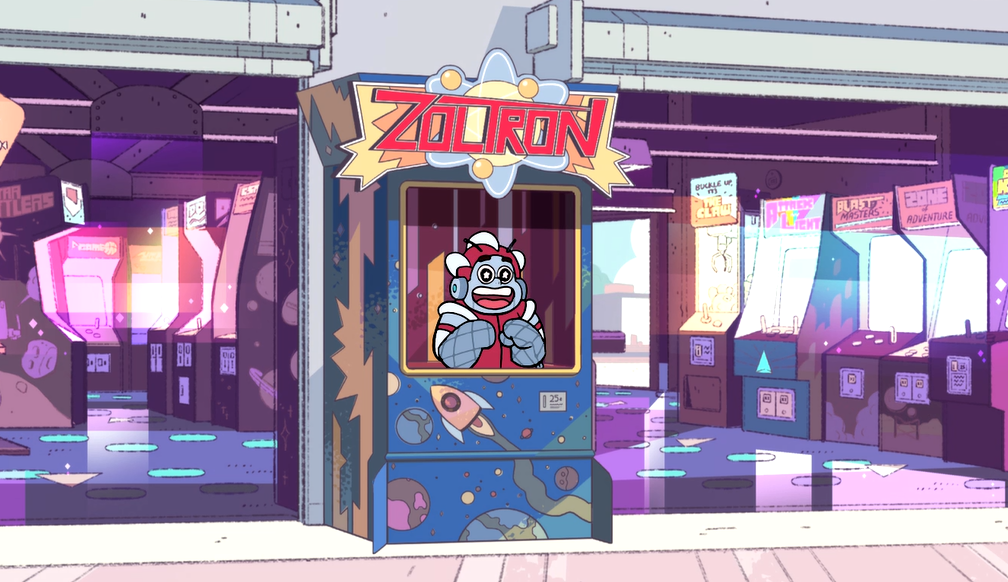 When Mr. Smiley breaks out a dusty, retro fortune telling machine which Steven promptly breaks, Steven gets roped into posing as “Future Boy Zoltron” to pay back the debt. While the set-up is a little thin (surely Steven could just get Greg to pay for the damages? Or better yet, use his healing spit?), it allows for a cute Beach City episode focusing on a character who’s gotten very little spotlight, despite his past as a performer. 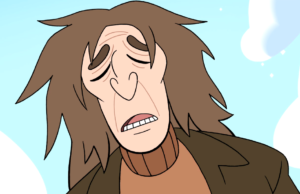 Mr. Frowney felt a little jarring and out of place for Steven Universe at first appearance, even down to his character design. Who was this random dude with semi-creepy music asking sad questions? But it turned out this was a Mr. Smiley backstory episode, and Mr. Frowney was his ex-comedy partner, and quite possibly his ex-boyfriend as well. His voice actor was Brian George of Seinfeld fame, which is neat. Colton Dunn seems to have officially taken over Mr. Smiley’s voice acting responsibilities, and Matthew Moy (normally Lars) voiced Zoltron before Steven backslapped the poor clairvoyant robot to death.

I like that Steven Universe takes time for these silly, sometimes experimental episodes. “Future Boy Zoltron” might not top anyone’s “best of” list, but it’s a Beach City breather with a lot of solid funny moments. Onion reentering the arcade with a face mask after Steven-as-Zoltron’s advice about avoiding prison, “Zoltron says that’s a question for your doctor,” “Don’t break character! You broke enough things for today.”

After the anxiety Steven expressed in “Mindful Education” about being unable to help Bismuth, Jasper, and Eyeball, “Future Boy Zoltron” was a nice respite for our most selfless space son. “I really feel like I’m making positive changes in people’s lives!” he tells Mr. Smiley brightly, energized by a day of faking out Beach City citizens for their own good. Seriously, how can the people of SU’s parallel universe be simultaneously so unfazed by magic and so gullible with simple costumes! It’s Steven’s voice and eyebrows! He’s wearing mittens! Lars and Sadie never cottoned on to Steven being Tiger Millionaire, and it seems that even him knowing their names and intimate details of their lives isn’t enough for the penny to drop. 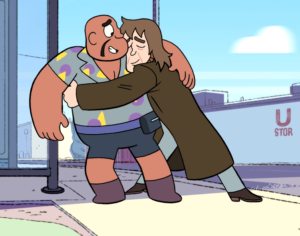 Another thing that was nice to see carry over from the previous episode was Garnet being a helpful, supportive mentor to Steven. So often when Garnet steps in for life-lessons, things tend to get heavy, so it was nice to see the two just taking the time to help others without emotional breakdowns or death hanging over them. Garnet was at her cockiest, but also her most affable, happily bestowing Steven with magical kisses, then reminding him to be home in time for supper.

Overall, “Future Boy Zoltron” was a delightful little episode, fleshing out more of our Beach City brethren, expanding the queer representation of Steven Universe, and giving li’l Stevie a much needed break from the extreme emotional toil that he has been bombarded with of late.