“The Dark Side of Dimensions” Goes Full Throttle with the Absurdity of Yu-Gi-Oh!, an Ode to a Generation 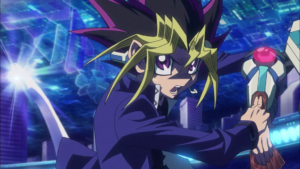 When a children’s card game determines the fate of the world, what more can you do but laugh and embrace this strange reality for what it is? Several years since the original series, Yu-Gi-Oh!: The Dark Side of Dimensions resumes from where things left off and makes no apologies by continuing to bend the rules of both the game and of reality. 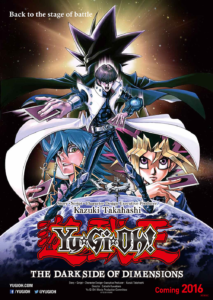 The English-language version of Dark Side of Dimensions heralds the return of all of the iconic talents from the anime series when it was originally distributed by 4kids Entertainment to American audiences.

Yu-Gi-Oh!: The Dark Side of Dimensions is the latest film in the Yu-Gi-Oh! franchise that was released in Japan last year but has only recently set foot in US theaters as of this past January. The film was produced by 4K Media Inc., a former subsidiary of 4Kids Entertainment now owned and completely controlled by Konami to specifically deal with Yu-Gi-Oh! media. The film continues from where the original series of Yugi and friends ended, answering a few things fans may have long meditated on since. When the numerous spin-offs that have been released couldn’t necessarily fulfill the needs of die-hard fans who loved the first anime, The Dark Side of Dimensions most certainly did. 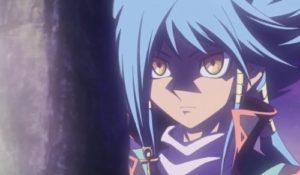 Aigami is a new character introduced in the film. But as Yugi and gang contemplate themselves: are they sure he wasn’t someone they have known all this time?

When the trailer for the film first dropped in 2016, what noticeably intrigued viewers were the striking visuals that seemed to better carry the spirit of Kazuki Takahashi’s intense linework in the art of the original manga. Versus the production of the series, the presumably higher budget of the film provided the world of Yu-Gi-Oh! something more colorful, more refined in animation compared to what was seen in the Pyramid of Light film at a time when the series was still in syndication.

Fans would appreciate and welcome the refreshing new treatment of the character designs – and more importantly, everyone’s hair – that demonstrate the overall changes anime production has faced in techniques compared to more than 10 years ago. Viewers may face conflicting views regarding the use of some 3D animation, but it is interestingly appropriate with the changing technological trends heavily emphasized in the context of the film. Besides Kaiba Corp.’s intent on innovating Duel Monsters with new tech once again, a character even makes it blatantly clear they are using a smartphone at some point! 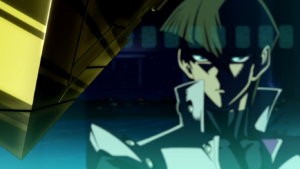 Kaiba’s thirst to face the Pharaoh once more, Yugi’s other persona, Atem/”Yami Yugi”, is the actual driving force behind the events of The Dark Side of Dimensions.

While debuting a new character specific to the film, who goes by the name Aigami, The Dark Side of Dimensions is determined to tie the knot between the film and series – something that Pyramid of Light failed to do. Provided not to give much away, Aigami serves as a successful mediator between film and series by providing clearer significance to the backstory of a few other characters that may have been forgotten. Admittedly, it is not Aigami who instigates the film’s events, but rather, an unsatisfied Seto Kaiba still driven by his obsession to simply beat Yugi in a duel. Instigating a chain of unfortunate events all because he wanted to retrieve the Millennium Puzzle once more, Kaiba no less also becomes a catalyst to the film’s climax. Pretty much a running joke at this point, it withholds an argument in fandom that he is arguably the true, main character of the series. (He’s the central point of the movie’s official poster, no less.)

As with the series’ own conclusion, The Dark Side of Dimensions is merely continuation of the beginning of an unforeseeable end. A less important aspect of the film points out that this is the characters’ final days as high school students, not forgetting to remind us that although they have faced many horrific challenges in their lifetime, that they are very much still just young teenagers who deal with school on the side: part of the films opening shows Yugi and gang heading to school one by one, and later in the film, another day that highlights their graduation practice.

In the end, although they are merely a ragtag group of kids with personal ambitions, the weight of the world’s fate still rests in (specifically Yugi’s) hands. It just helps that a very rich boy is confusingly working along their side. (To Seto Kaiba, money does seem to solve everything.) 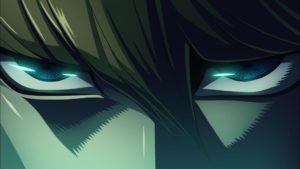 Eric Stuart returns to voice Seto Kaiba; just as Stuart acts theatrically with a certain range that is appropriate for the specific anime characters he has voiced (James of Team Rocket from the Pokemon anime, for instance), he knows how to portray the extreme caricature of a teenager driven by both wealth and obsession – and a bit tongue-in-cheek at that, too.

When the first anime reached American shores, 4kids Entertainment already built itself a notoriety for  censoring and sloppily cutting out what they considered the more “adult” aspects that existed in the context of the anime shows they distributed.  Their more popular product, the Pokemon anime, fared better with audiences who took notice, but the series still faces just as many edits and changes that were downright unnecessary.

But when you are young, excited, and driven to wake up early on weekend mornings just to see Yugi win his next duel, you wouldn’t care that much or think too hard about why these characters native to Japan have Western-sounding names. To many people, Katsuya Jonouchi has and always will be the Brooklynite-street-talking Joey Wheeler. This alternative canon 4kids has set up for many English-speakers has been embraced as another reality of the show continues to be celebrated. The censorship, over the top vocal performances, and timely line deliveries detached from the original Japanese script would become the butt of jokes and set up the foundation for LittleKuriboh’s Yu-Gi-Oh! The Abridged Series. With such a dub that many anime purists would consider a curse, others strangely enough consider it to be a blessing. 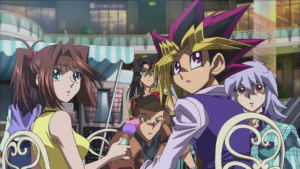 The friendship of the gang is as strong as ever, as they continue to maintain their bond while contemplating their respective futures after high school.

That is not to say the English-language version of the anime is at fault for painting a very absurd image of the Yu-Gi-Oh! world on to many. At its core Yu-Gi-Oh! was already utterly silly and kitsch: a gaming franchise seems to be a globally accepted tool for resolving or instigating very real destruction and violence, a bizarre interpretation of Ancient Egyptian myth is dictating the fate of a very specific group of Japanese students, and a teenager runs a corporation so rich and vast that it can invent time travel but he chooses to invest that wealth on his ego just to beat a kid in a card game.

It’s not only Yu-Gi-Oh!’s ridiculousness that has made it appealing to a diverse array of people. At the root of its ridiculousness lies a journey to the hero mythos that is attractive to the young at heart: immense power and amazing capabilities are put into the hands of young people to overcome the violence of evil when adults are absent or are the true antagonists – a common trope that is the basis for all shounen and shoujo genres, if not most fiction targeted to kids and young adults alike. What more is this power of the youth symbolized, if not through something like a children’s trading card game literally defeating the bad guys with imaginative monsters? 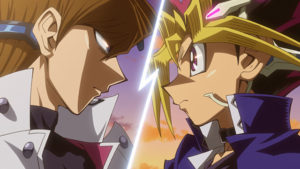 The unwavering rivalry between Seto Kaiba and Yugi Mutou may never find itself a true victor.

This explains the universal popularity and love given to something like the Harry Potter franchise. Harry Potter not only carries this structure, but specifically explores a diverse array of students and rejects that lead an uprising against a political evil in an already scary, dangerous, and “adult” world. To harness magic represented a power many of us want to defeat our enemies, just as similar to harnessing the power of facing your opponents in duels through the fancy tech of Kaiba Corp – while looking cool.

Although The Dark Side of Dimensions seemed like it was closing the door on the original series, Yu-Gi-Oh! as a franchise will more than likely never see a true end. A fifth spin-off series, currently untitled, has been announced and will start airing in Japan in spring of this year. Yu-Gi-Oh! is undeniably a cash market for toys and merchandise, but it continues to send a simple message of good triumphing over evil that clearly resonates with many. 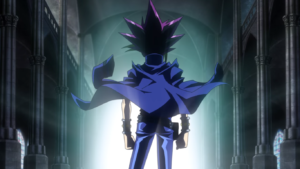 Atem has very minimal presence in the film, but like within the context of the story, his spirit is an invisible force behind all of the events that have happened.

The film’s release was timely, perhaps acknowledging the original anime’s audience who are now adults themselves. Just as Yugi and the gang must face the end of their high school days, the film was a reminder to never forget one’s youth. It was an ode to the kids who learned how to play a Game Boy without a backlight, who could only trade Pokemon locally via a link cable, the former kids pondering when Kingdom Hearts 3 is to finally come out, and the former kids who now officially identify as the last couple of generations who dealt with analog as they face head on into a transition of a near, all-digital era. In short, The Dark Side of Dimensions was certainly a love letter to the kids of the early 2000s who grew up watching Saturday morning cartoons. There are fans who will continue to support and the play games, but with a much more complex perspective compared to their youth, today’s newcomers enter a world starting to resemble the complexity of Kaiba Corp technology. Yu-Gi-Oh!: The Dark Side of Dimensions is a must see for old fans who want to satiate what was missing for the past decade.

In the end, with every episode, film, or saga that comes to a finish, we can always trust Yu-Gi-Oh! to hand us the most basic lessons at its roots: evil never wins, good will somehow triumph, Seto Kaiba will probably never change, and that we should always put our full trust in the Heart of the Cards™. 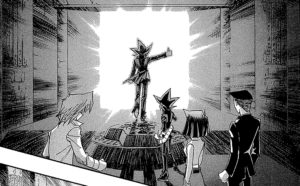 Near the conclusion of the original series, following his final duel with Yugi, Atem crosses the door into the afterlife while giving a thumbs up to the gang to reassure everything will be okay.

Elvie is an animator based in the NYC-metropolitan area. She graduated with a BFA in Animation at the School of Visual Arts. In truth, she might be a total weirdo for trying to make a living deconstructing cartoons and video games, but you’d be a fool to think that would stop her. She currently creates animated content for Mashable.

Previous:Full Trailer For The Fifth Season Of “Samurai Jack” Released