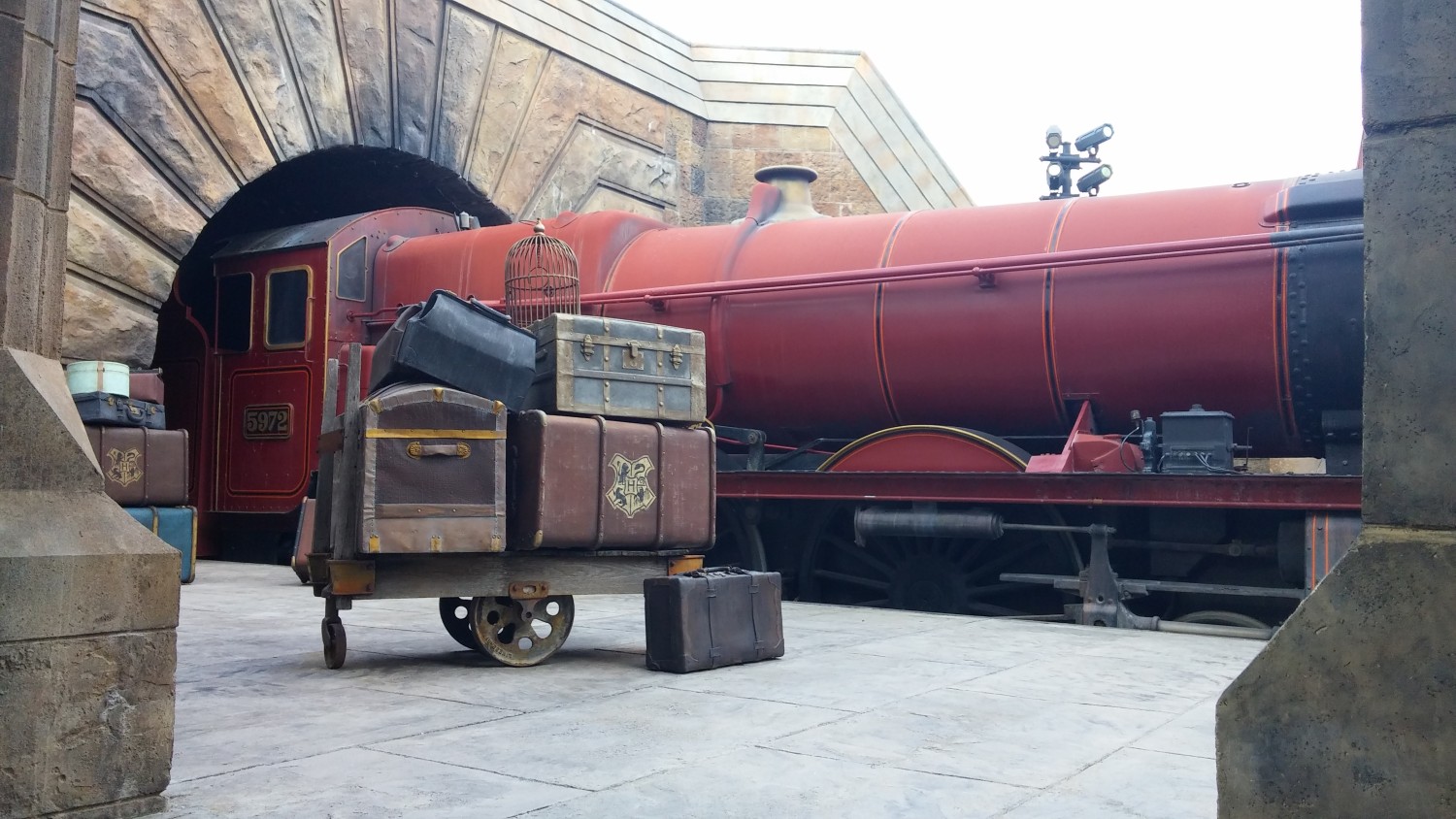 When I tell people that I was at Universal Studios Islands of Adventure the week that the original Wizarding World of Harry Potter opened, most people are jealous.

Don’t be. It was horrible.

The crowds were insane, the heat was intense, and I was really sunburned. My mom refused to come anywhere near the park, which put me on an unintended time limit. I felt guilty waiting in line for anything, considering I had to go meet my mom when I was finished.

What does that have to do with anything? Well, last week I and some friends took much-needed vacations and road-tripped down to Florida for some fun, including a stop at Wizarding World.

This isn’t new or ground-breaking information, but Wizarding World now spans both Universal parks. Hogsmeade is in Islands of Adventure, while the “new” addition is Diagon Alley in original Universal Studios. 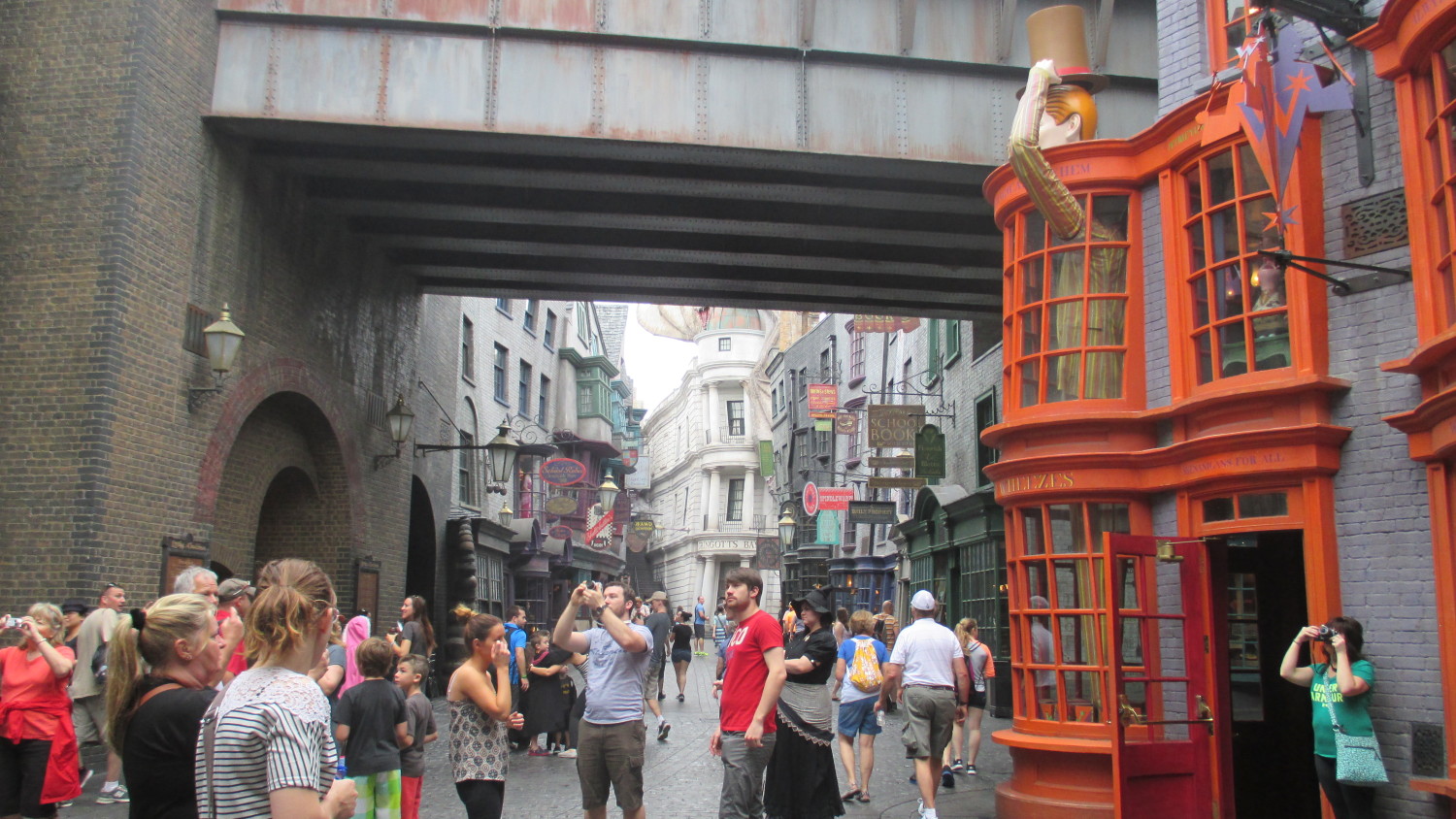 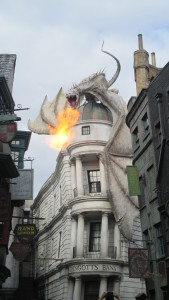 DIAGON ALLEY: For those who have never been to Universal Studios in Florida, the park is made to look like different film sets. There’s a “New York” as well as the seaside town from Jaws, so when you cross over into “London”, it’s not immediately noticeable.

If you don’t happen to spot the giant, triple-decker, violently purple Knight Bus, that is. The conductor and the shrunken head banter as you wander around Grimmauld Place (look carefully, and you may spot Kreacher peeking through the curtains of Number 12), searching for the “hidden” entrance to Diagon Alley – which just like in the story is through an archway.

As soon as you emerge through the archway, you’re greeted by the sight of Gringotts Bank – complete with escaped dragon (that actually breathes fire) – as well as Weasley’s Wizard Wheezes and many other notable shops (Madame Malkin’s, Quality Quidditch Supplies, and of course, Ollivander’s). You can also take a side trip down Knockturn Alley for all your Dark Arts needs.

We caught a performance from Celestina Warbeck, but we missed the actors troupe that performed some of Beedle the Bard’s tales. 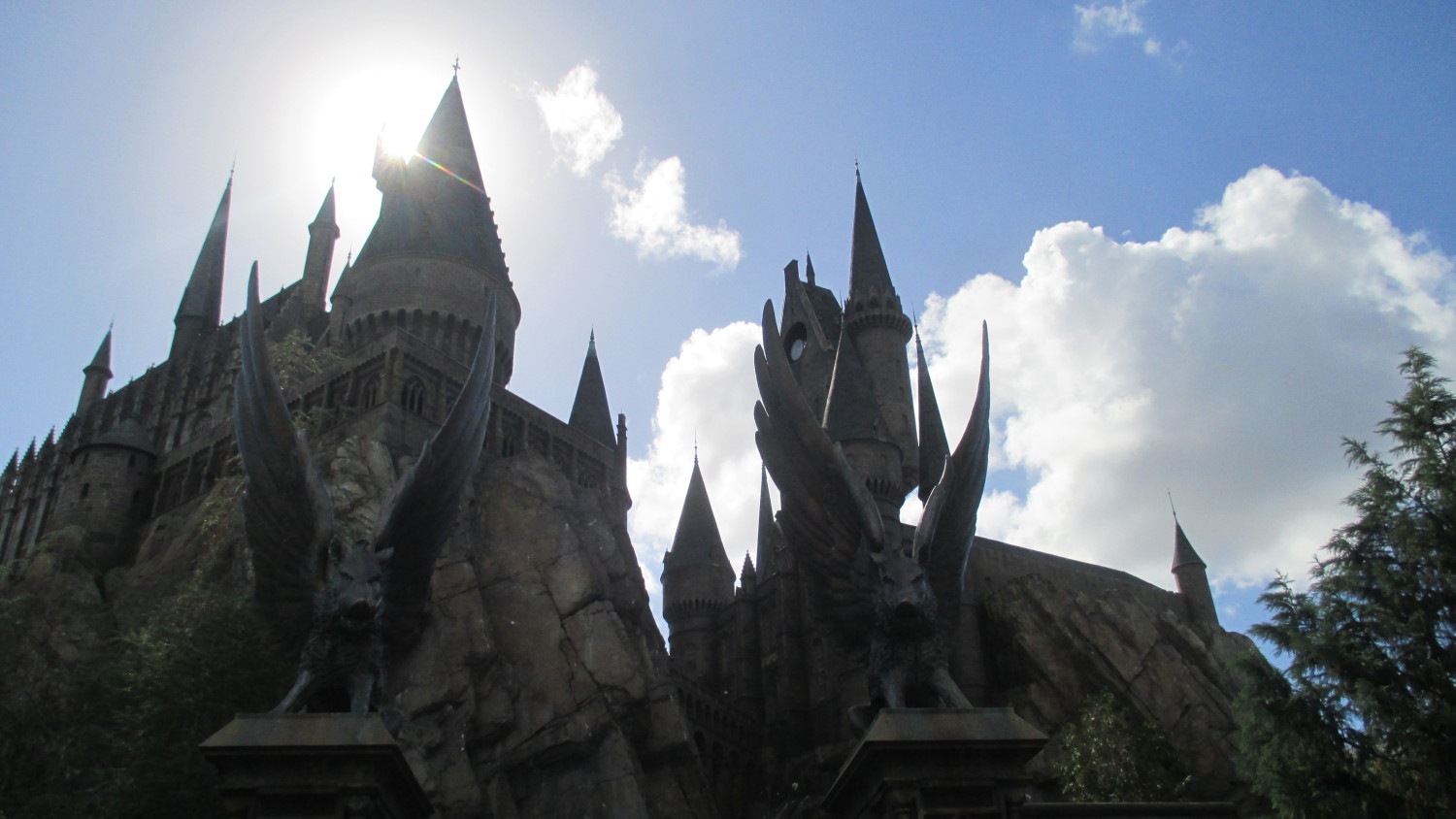 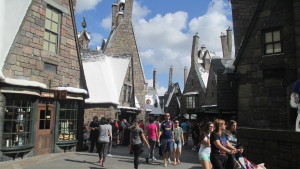 HOGSMEADE: Islands of Adventure is also made to look different for each section of the park. You walk through a dense tropical jungle full of dinosaurs to get to the quiet Scottish hamlet of Hogsmeade in winter time.

With the massive black castle of Hogwarts above you, you stroll through the streets of Hogsmeade and browse staple shopping spots like Honeydukes and Dervish and Banges. In the movies, we only ever saw Hogsmeade in winter, so piles of “snow” are everywhere, and the street is perpetually decorated for the holidays.

We were able to catch the Hogwarts choir as well as the entrances of the students from Beauxbatons and Durmstrang.

Winner: While the attention to detail in both sections is impressive, Diagon Alley wins this round. By having to enter through a “secret” entrance, it feels more like literally walking into another world. You’re more immersed in the atmosphere because all you can see is Diagon Alley.

Hogsmeade is connected to the rest of Islands of Adventure in a way Diagon Alley isn’t in Universal Studios, which takes away some of the magic a bit. (If you’re in line for the Forbidden Journey, you can hear the Jurassic Park theme playing in the neighboring section.)

DIAGON ALLEY: There is only one ride at Diagon Alley: Escape from Gringotts. Set during the trio’s adventure in the bank in Deathly Hallows, you are meant to be taking a tour of the bank but are accidentally brought along for the ride, facing Voldemort and Bellatrix with a little help from the trio and Bill Weasley. Using 3D and moving cars, it feels like you are actually careening down the tracks towards the vault – plus all the actors reprised their roles for the video. 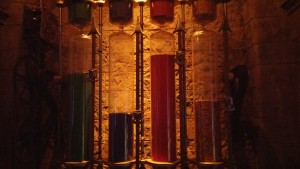 HOGSMEADE: There are three (technically four) rides in Hogsmeade.

The Forbidden Journey is similar to Escape from Gringotts but more intense. The cars don’t just tilt and rock- you are actually upside down at times. Even waiting in line is amazing, because you make your way through Hogwarts and get to spot things like the Mirror of Erised and the hourglasses that monitor house points.

Flight of the Hippogriff is a family-friendly roller coaster through Hagrid’s pumpkin patch. Look closely to spy Buckbeak through the vines!

Dragon Challenge consists of two interconnected roller coasters meant to signify the first task of the Triwizard Tournament. There is a red dragon and a blue dragon. Ride each one, because they’re not the same!

Winner: Sorry, Gringotts. You were fun, but Hogsmeade wins this one!

Yes, it was a little annoying that you’re not allowed to bring absolutely anything on the Dragon Challenge, meaning that I couldn’t get any pictures of the champions’ tent. BUT I was rattled around so much on the ride that I was glad I didn’t have my phone with me as planned. If you want to ride both dragons, there is a “re-ride” line after you get off, which saves you from having to go all the way back through the regular line.

Flight of the Hippogriff is a bit mild for adults, but it’s a nice change after all the moving around you do on the other two rides! 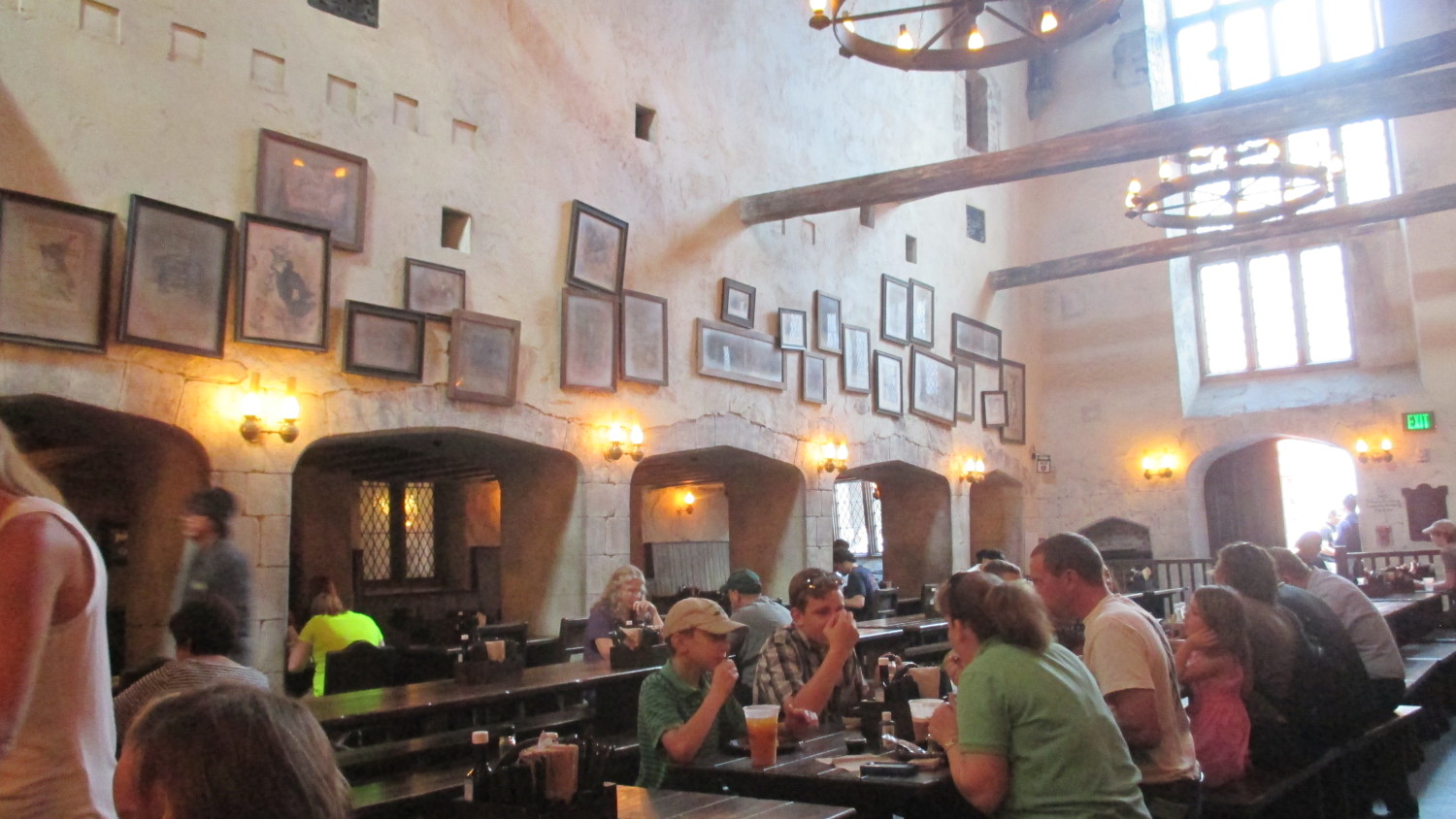 DIAGON ALLEY: Stop in for a bite at the Leaky Cauldron! Serving traditional English fare like shepherd’s pie and fish and chips, the Leaky Cauldron is the most popular pub in Wizarding London. Don’t forget to try the Butterbeer, or sample a refreshing pumpkin juice!

Diagon Alley is also home to Florean Fortescue’s Ice Cream Parlor. There you will find such tantalizing concoctions as Chocolate Chili and Earl Grey & Lavender.

There are plenty of sweets to be found at Weasley’s Wizard Wheezes. Not only does the twins’ shop boast “traditional” Wizard candy like Chocolate Frogs and Peppermint Toads, you can also pick up one of their famous Skiving Snackboxes. Eat at your own risk! 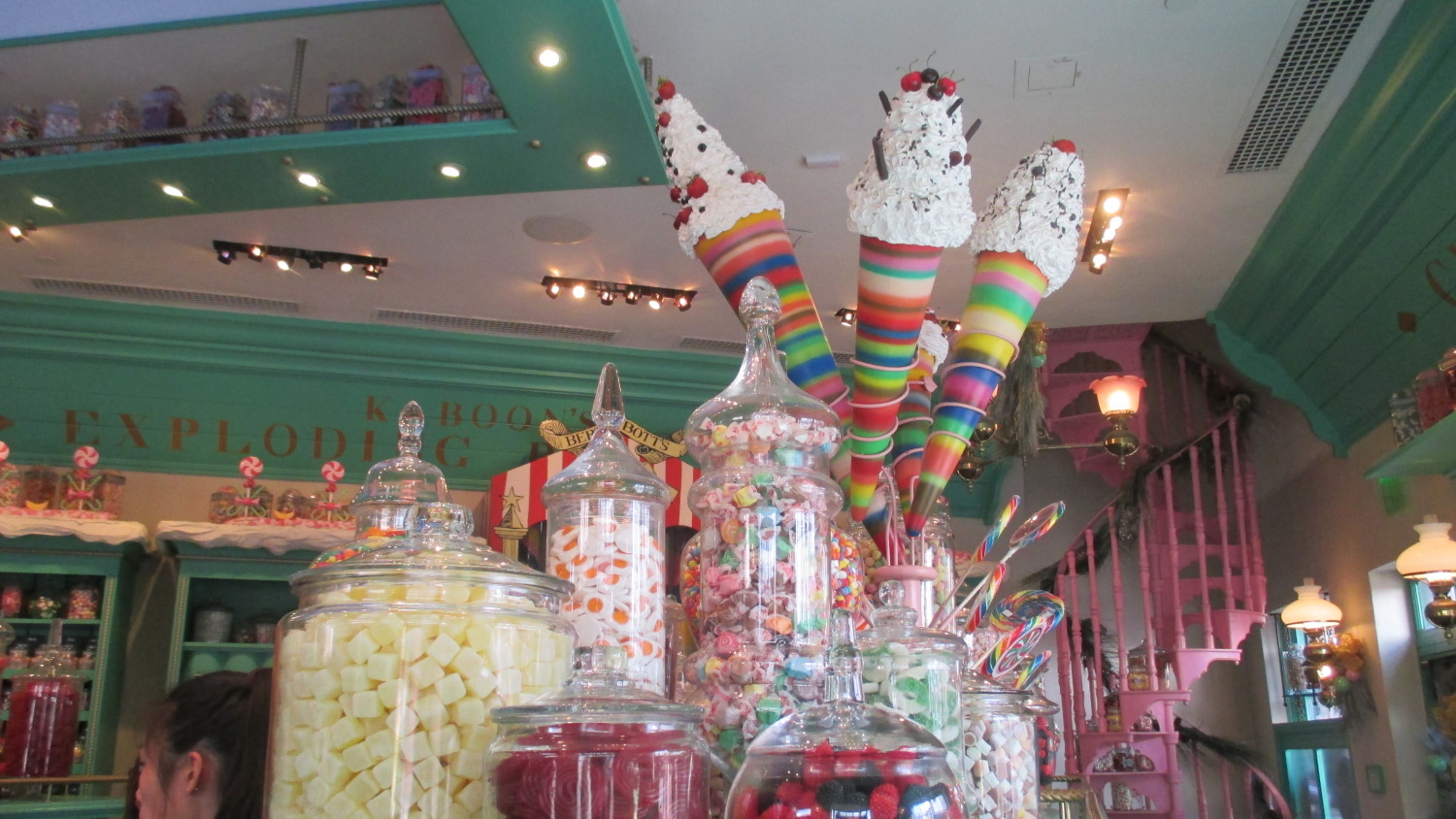 HOGSMEADE: Dine at the Three Broomsticks! It also serves traditional English fare, with the addition of the connected Hog’s Head bar, which serves Butterbeer as well as many domestic and imported beers in addition to wine and mixed drinks.

Make sure to stop at Honeydukes. That place is stuffed to the brim with Fizzing Whizzbees, Bertie Bott’s Every Flavor Beans, and Cauldron Cakes.

Winner: This one is a tie! Each park only has one restaurant, and both serve exactly the same menu.

Diagon Alley has Florean’s, which has some really amazing ice cream. Seriously, I had the salted caramel toffee and it was unbelievable. However, Hogsmeade has Honeydukes. Butterbeer is available at both locations, and it is a way better recipe than it was when I was there last (when it was just cream soda). 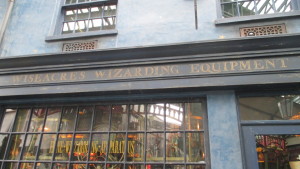 DIAGON ALLEY: Shop Quality Quidditch Supplies for a genuine movie replica Quidditch sweater, which I totally would have bought had it not cost more than $100. I consoled myself with a Holyhead Harpies t-shirt and a Ravenclaw hoodie.

Buy a pygmy puff at Weasley’s Wizard Wheezes or a stuffed Hedwig at the Magical Menagerie. Wiseacre’s Wizarding Equipment sells a wide variety of items, including mugs, stationery, and apparel. Pick up a house t-shirt at Madam Malkin’s.

Do your tastes run towards the dark side of things? Borgin and Burke’s in Knockturn Alley is probably more your style.

Don’t forget to stop by Ollivander’s to pick up your wand! You can buy one of many character replica wands (I bought Hermione’s the first time I was there), or you can buy your own. All non-character wands are interactive. There are spots throughout both parks that are specially marked. Do a wand movement, say a spell, and watch the wizarding world interact with you! 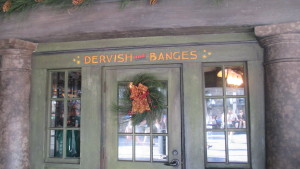 HOGSMEADE: Honeydukes has already been mentioned, but it bears repeating. SO MUCH CANDY.

You can also drop by Dervish and Banges for a nice assortment of house-related apparel. I think they out with a different version of the house scarves every year (I have three!).

Up by Hogwarts is Filch’s Emporium, which offers replicas of movie props as well as some clothes that you can’t find anywhere else (like Harry’s Quidditch shirt). There is also an Ollivander’s in Hogsmeade if you forgot to buy your wand in Diagon Alley.

Winner: It’s only fitting that the premiere spot for wizarding shopping wins this round. Diagon Alley makes up for less rides by having way more stores with a greater selection of merchandise. And while I am thrilled that they have diversified a little bit and I have more choices when it comes to buying house-related items, I’m still a little disappointed in their offerings.

Also, I wish they had worked with Pottermore and tried to match the wand woods used on the site. According to Pottermore I have a sycamore wand, but that is not one of the options at Ollivander’s. (I read the descriptions and settled on Hawthorne.)

I’d recommend looking in all of the shops in both sections before buying anything. Everything is kind of pricey, and you don’t want to miss out on something you really want because you spent too much money to soon. A lot of the stuff is the same in both parks, but not everything, so stop in every store! 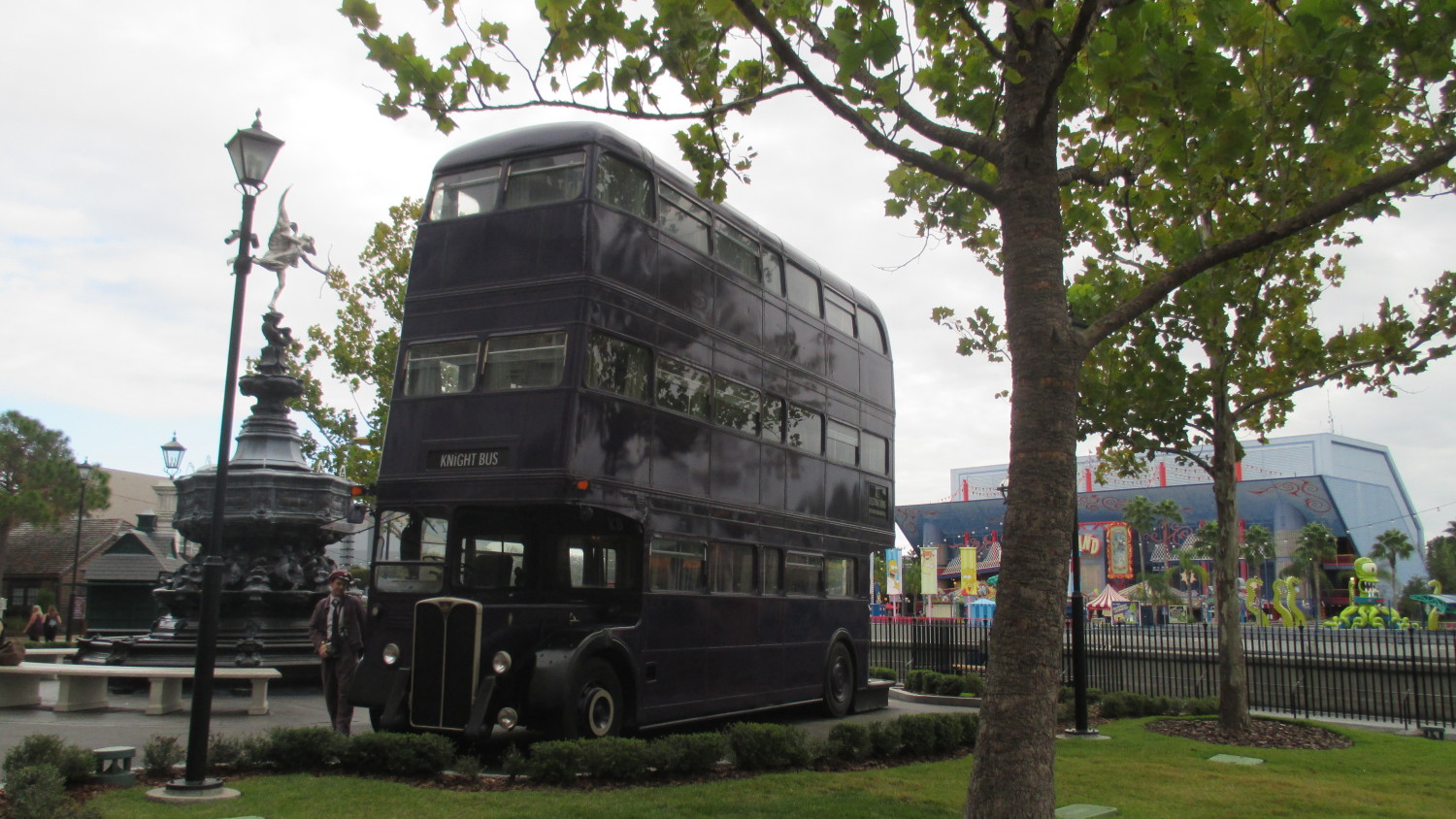 Obviously I think you should do both sections if you can. But I was way more impressed by Diagon Alley, and not just because I’d already been to Hogsmeade once before. Diagon Alley just seemed more like actually stepping into Wizarding London than Hogsmeade. We spent more time, took more pictures, and bought more stuff in Diagon Alley than we did in Hogsmeade. Though I do love the rides, I think if I had to pick only one section I would pick Diagon Alley.

That said, if you’re making the trip down to Orlando, make sure you buy a park-to-park pass. It allows you to ride the Hogwarts Express between the two sections. Take it both ways; the experience is different on the way to Hogsmeade than it is on the way back to Diagon Alley!

Have you guys been to Wizarding World? What did you think? Do you agree with my assessment? What was your favorite part? Let us know in the comments!