The New Star Wars EU: Lost Stars, Part of the Journey to The Force Awakens 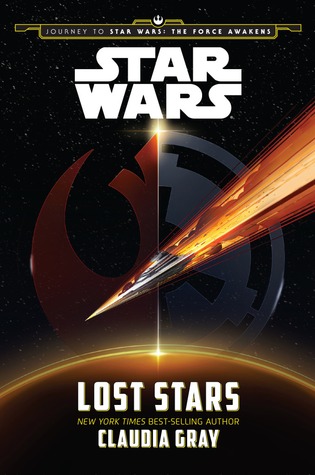 I have to be honest – for the longest time, I mostly stayed away from any big news involving the upcoming Star Wars sequels.

This was artly because the first things I heard regarding movie casting were a bit disappointing, though thankfully my concerns about the lack of female characters were later put to rest. And when I discovered that they were already publishing new Star Wars novels, I dove right in, picking up Lost Stars despite the fact that it’s a YA novel and those aren’t usually my thing.

Unfortunately for me and my own personal taste/interest, Lost Stars does begin in a solid YA setting, and continues that way throughout at least the first half of the novel. But even that I could have forgiven, because I knew what I was getting myself into…except for the fact that a good portion of the beginning is almost childish, whereas the second half of the novel is much more adult than Young Adult. I mean, I get it – the author spent 500 pages writing about main characters Thane Kyrell and Ciena Ree, opening with their meetcute as young children and then fast-forwarding through their lives as they attend the Imperial Academy on Coruscant and are later embroiled in the war between the Empire and the Rebellion. They are both humans (Thane male, Ciena female) from the Outer Rim planet of Jelucan, though they come from very different backgrounds – something that fuels their stories throughout Lost Stars.

The problem was, a lot of this novel felt rushed, the time skips, and while necessary for length in a single novel, it only took away from both character development and world-building. Yes, we know a good amount about the Star Wars universe – but Lost Stars felt almost forced at times because it was jumping forward months or even years every few chapters. And to go along with my earlier comments about it seeming childish and then almost immediately jumping into very adult scenarios, I think that both that issue and the problem with the time skips could have been solved by making this into a trilogy – preferably one that was published over a period of time. As it is, I felt like I was reading a book that was rushed to press, and while it wasn’t terribly written, it being presented in this manner led to it losing a lot of the impact that it could have had.

One of the positives was the fact that Ciena is on par with Thane in every respect. Each of them has flaws, each of them is slightly better at something than the other, but they are presented as equals in many ways for most of the novel. That said, it’s unfortunate that Ciena’s story becomes quite a bit maddening toward the end. I’ll avoid saying any more because I don’t want to spoil anything, but I will say this – Thane’s character development is handled extremely well. It’s natural, believable, and I grew to care about him. Ciena, on the other hand, does not profit from similar character development. She stagnates, and while I understand the author’s reasoning for this, that doesn’t mean that it was the right or natural decision for this story.

While it started a bit slow and certainly had its flaws throughout, overall I enjoyed Lost Stars. I think it’s worth picking up if you’re a huge Star Wars fan, and even more so if you’re a Star Wars fan who enjoys YA lit.