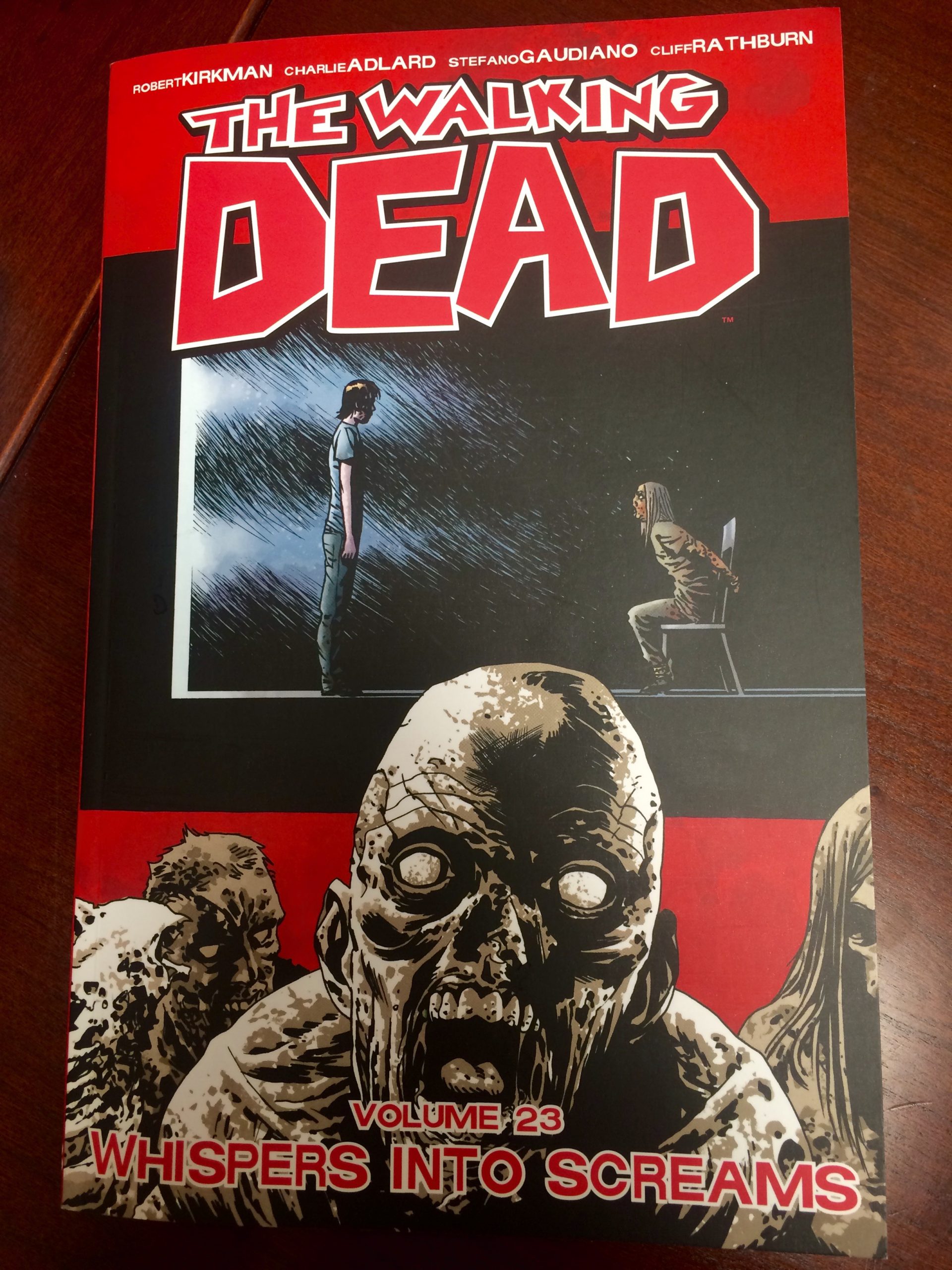 WARNING: Spoilers through Volume 23 (issues 133-138) of The Walking Dead comics. 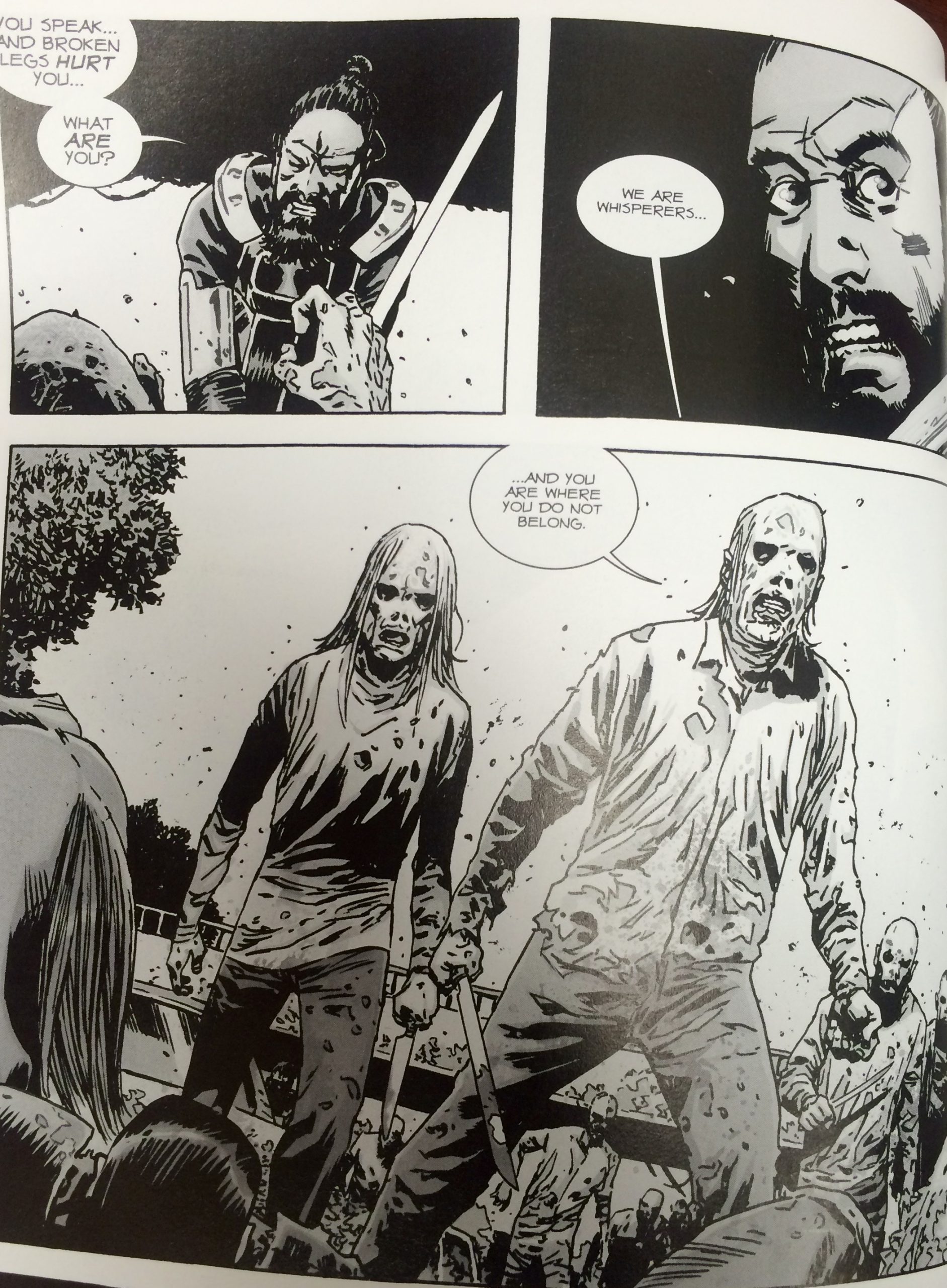 After the cliffhanger at the end of Volume 22 of The Walking Dead I was worried that the next several issues would jump right into another “war” of sorts.

But they didn’t. Unfortunately, while part of me is relieved about that, I also found myself wondering what in the world they were going for with these issues, because they seemed like drawn-out filler…and boring filler, at that.

Not much time has passed between the end of Volume 22 and the beginning of 23, but there is some serious lack of transition, especially involving some of the new characters who arrived in Alexandria in “A New Beginning”. One moment they were mistrustful of Rick & Co. and trying to undermine them, but now they’re suddenly hanging out with Andrea, picking veggies, and being curious about Eugene’s apparent depression? On top of that, other than those brief scenes, the rest of “Whispers into Screams” focused on the Hilltop – and above all, Carl.

I’ve been getting used to him, really, and in this volume I generally liked him…but that doesn’t mean that I care for the way the writers are handling his storyline. “Whispers into Screams” jumped right into his story with some panels where Carl is getting dressed, trying to find a bathroom to use, and then sitting down and reading a letter from a girl he left back in Alexandria. At first I thought this seemed sweet…until, as the volume wore on, there were also hints that Carl might end up being more than friends with Sophia. 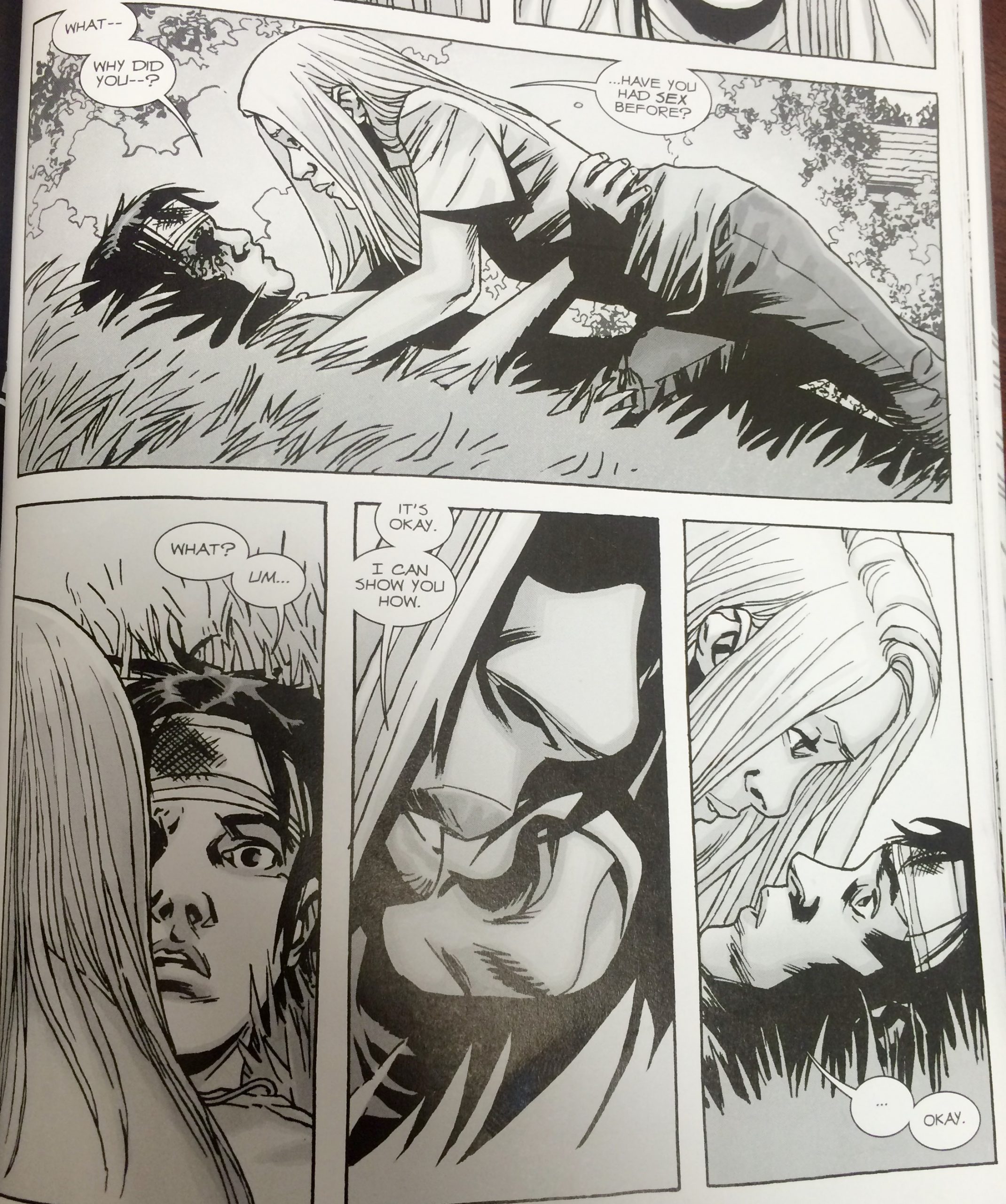 Which was then topped by Carl losing his virginity to a complete stranger.

Listen, I get it, it’s a post-apocalyptic world and Carl is a teenager who’s lived through so much that him having sex is, at this point, really no big deal. My question is, was it really necessary for his first time to be with a girl he’d just met? A girl who was weird enough to stick her tongue in his missing eye hole? A girl who thinks it’s totally normal to dress up in the skins of dead people and wander around with groups of walkers? In my opinion that’s a bit much, even for this comic.

The more maddening story line, though, was the one involving the Hilltop kids who keep trying to randomly beat people up. In “A New Beginning” Sophia saved a friend of hers from being attacked by these hoodlums, and in “Whispers into Screams” Carl has to save Sophia from these same kids. And as much as I understand that the new rule is to live in peace, man did those kids get what was coming to them – though I agree that Maggie handled things well by first locking Carl up for a while and refusing to just let the fact that he almost killed those kids go.

Unfortunately for Maggie (and to just add a bit of frustration for us readers), the parents of those hoodlums refused to believe that their kids did anything wrong. The fact that this led to Gregory trying to poison her, though, was more than a little over the top – though perhaps the main problem there was that it all just happened too fast. It was very much “Oh we’re upset with Maggie – oh she sucks at being our leader – wait we never chose her anyway, she just started bossing people around – yup let’s kill her!” Put simply, a plot like that would have worked better had it been built up over a longer period of time. And as much as I don’t want Maggie to die, the fact that Gregory failed so miserably in his attempt was too sad to even be amusing.

I will say that I was interested to find out more about these “Whisperers” that were teased so much in Volume 22, and in that respect I wasn’t disappointed at all. As previously mentioned, I’m definitely glad that the network of the Hilltop, Alexandria, and the Kingdom didn’t just jump right into war with this new “threat” – which didn’t seem to be a threat at all once it was understood that the Whisperers simply want strangers to stay away from “their” land. Of course I’m still creeped out about a lot of what they’ve got going on – the fact that they wear the skins of the dead, for one, but Lydia’s confession that she basically has to have sex with whoever whenever whether she wants to or not is in my opinion far worse. Still, Carl is probably biting off more than he can chew, going after her, and I don’t see how his doing so can end well. I suppose we’ll find out in Volume 24!

1 thought on “The Walking Dead Volume 23 Review: Whispers into Screams”