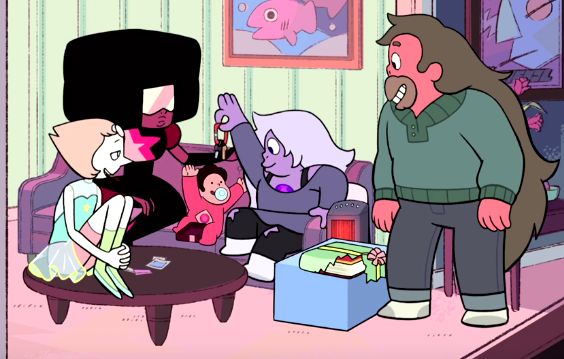 “Three Gems and a Baby” will make you laugh, cry, and clap your hands at the cuteness of it all in the span of eleven minutes. In other words, it’s a Steven Universe episode.

“Three Gems and a Baby” deals head-on with a subject that has been hanging over the show since the very beginning: for Steven to live, Rose Quartz had to die. Well, perhaps not die: give up her physical form, lose her memories, transform, be reincarnated… Whatever the wording, the fact is that she’s no longer around, and cannot exist simultaneously alongside Steven. We’ve seen the devastating effects that linger in present day, but a question that’s always lurked is “how bad was it immediately after Steven’s birth?” 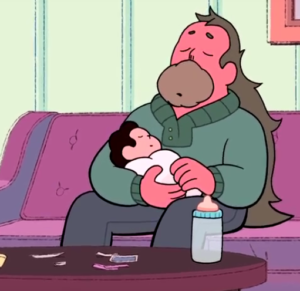 The answer turns out to be: actually quite understated. Steven’s family wasn’t in full-black mourning mode. As a single parent, Greg was far too busy being a father for that. Still, the exhaustion that hangs over him is palpable. Parenting is a difficult enough job in ideal circumstances, and he’s facing it alone, in the wake of extreme grief. It is now an in-show acknowledged fact that any Greg flashback episode must begin with a song, and “I Could Never Be Ready” is the bittersweetest communication of everything that has happened to him since Steven’s birth.

When the Gems show up at his door, there’s a reason his reaction isn’t joy or relief, but awkwardness. Greg is painfully aware of the disconnect that’s always existed between them, and how much worse it’s going to be now. The Gems, for their part, don’t really understand what is happening– and are on some level in deliberate denial. Despite Steven acting like, well, a baby, they all cling to the idea that Rose (as a conscious being) is in there somewhere. Amethyst thinks she’s just shapeshifting for fun. Pearl thinks that she’s trapped inside a baby’s body. Garnet’s idea that he’s a fusion hits the closest to the mark, but is still off. It’s true that both of them are love fusions, but Garnet’s existence is an active choice made moment to moment, and even if Ruby and Sapphire defuse, she still exists as their relationship. Steven, however, is the embodiment of a single choice between Greg and Rose. There is no defusing for him, at least not without destroying him permanently. 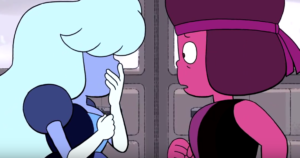 (On a side-note, the brief appearance of Ruby and Sapphire in this episode certainly helps explain why Garnet was so reluctant to share the truth with Steven. It wasn’t just her own experience with Homeworld’s prejudices, but the fact that Steven burst into tears the first time she defused in front of him. Shame no one explained object permanence to her.)

To see each Gem deal with their grief/denial is hard… but Pearl’s moment of awful indecision, where she reaches out to presumably tear the rose quartz gemstone out of Steven… that has to be the hardest. There have been many fan interpretations of variations on this moment, but finally, in “Three Gems and a Baby”, we have canon evidence that Pearl was fond of Steven as his own person from very early on, a smile on her face as she watches his “captivating” key antics. And it is his giggle at her touch that snaps her back to reality and reminds her of why Rose wanted this: humans change and grow. Even if it was hard for her to accept, even as terrifying as the prospect of a future without Rose was, Pearl has done the same. They all have.

The heart of Steven Universe is a found family narrative, whose characters change and grow, especially in their relationships with each other. “Three Gems and a Baby” exemplifies all of the best of this. In the flashback, Pearl snaps at Greg that they are only around to drop off their (hilarious) gifts, and that they don’t have time for tea. In the present day, she unfolds herself without prompting to put the kettle on for her erstwhile romantic rival, just because it’s cold and she remembers Greg likes tea! (Plus, Amethyst loves tea bags. Sidenote: how long did she spend as a toilet??). And it’s not as if everything tense between Steven’s infancy and “Three Gems and a Baby” was instantly fixed, just because his guardians understood each other better at the end of the kid-slash-vannapping incident. Compare “House Guest” from season 1, where the Gems are uneasy allowing Greg inside the house at all, to the present-day secular snow day interspecies sleepover and story swap.

Pearl chuckles that fourteen years “was a really long time ago” as if she isn’t a millennia-old war veteran space alien. But she is not wrong, in terms of the depths of new and improved emotional connections fostered in that time between every person in the room with her. The future is bright for the Gem-Universe family if they continue on their current trajectory of love and understanding one another. 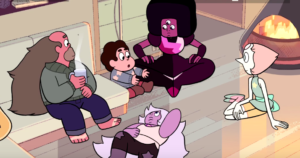