Korra and Asami Are Getting Bi: Turf Wars Part 1 Review 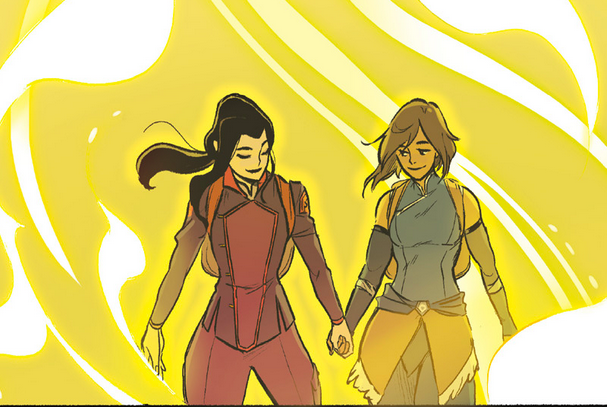 Turf Wars is the long awaited comic series adaptation of the Nickelodeon television show, The Legend of Korra, written by Michael DiMartino and illustrated by Irene Koh. It starts off immediately where the finale left us: our heroines Korra and Asami off for a romantic vacation in the spirit world.

In the aftermath of Kuvira’s assault, Republic City is in chaos. A huge refugee camp has been set up for the hundreds upon hundreds of people displaced when their homes were destroyed. The destroyed land has also impacted the city’s criminal underbelly, with the mysterious young Tokuga taking advantage of the confusion to become the new leader of the Triple Threat Triads. It’s an interesting plot– though perhaps not as interesting and in-depth is it could be if the story was allowed to be told in a more expanded medium. (Such as, say TV, *cough cough*).

Meanwhile, a billionaire tycoon Wongyong Keum who owns the land that the Spirit Portal appeared on, is planning to form a tourist getaway business. The spirits are none too happy at the prospect of humans interloping on their world, and many are hesitant about this third portal being open at all. Korra initially attempts diplomacy, but for once it’s not her who loses her temper– it’s Asami. Recalling his shady dealings with her own father, she declares that he can’t be trusted and orders him to leave. A little bit of ‘Avatar intimidation’ sends him scampering, but it’s clear the battle isn’t over. 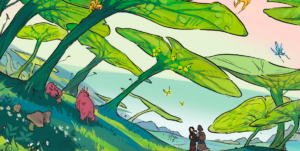 This is where we see why the extended vacation scenes in the spirit world were so important, story-wise. Those shots of the gorgeous, surreal landscapes of the spirits were breathtaking; and as Keum points out, shouldn’t everyone have access to that? The answer is definitely ‘yes’, but it’s got to be handled with a deft hand– and not train cars of tourists.

If I have any real criticisms of Turf Wars, it’s with regards to how certain aspects of the story are presented in quite a simplified manner. The show often had to pull its punches for the Nick age range, and I had hoped that being in a comic medium would allow them a little bit more freedom in that regard. It’s hard to believe that President Raiko is running unopposed– and if there really are no up and coming politicians trying to take advantage of his extreme unpopularity, why is he so disengaged? The fact he apparently hadn’t even considered the housing problem seems frankly unrealistic. Similarly, the scenes of the refugee camps and Korra’s impromptu rousing speech are great, but a little toothless. It would be great if the comic could really depict the difficulties that come from living in such conditions, Zhu Li’s excellent organization or not.

Of course, while all these subplots about refugees and spirits are important, the true meat of this entree is none other than Korra and Asami themselves.

The show’s finale made a huge splash in their decision to pair the two female leads together, met with joyous celebrations of this hallmark in representations, angry complaints from queerphobic viewers, and genuine complaints from LBGTQ fans that the depiction may not have gone far enough. The writers were clearly very much aware of just how much was riding on this comic, and handled the topic with a delicate hand. Not to mention a proper, on-the-lips kiss. 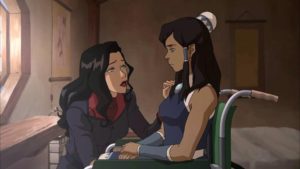 Turf Wars is excellent at showing what pulled Korra and Asami together in the first place, and what makes them so excellent as a couple. They complement each other– Korra, brash and to the point, with Asami more reserved and thoughtful. Despite these superficial differences, however, there are core elements that ring true. In a touching scene, Korra admits how relieved she was the first time Asami took her racing, realizing she’d found a kindred spirit, another girl who was just as intense as her. The two go on to discuss Korra’s trauma after her poisoning by the Red Lotus, and Asami’s previous fear of opening up to her, in case she pushed her away.

There was an obvious question going into this story: how would people react to a same gender relationship in universe? The creators choose to strike a balance between between two potential extremes. Everyone close to the couple are nothing but supportive and accepting (Mako’s momentary short circuiting when he realizes his two exes are now dating aside). However, the world at large is not nearly so progressive. Tensions arise when Kora’s father warns her of this, and advises her to keep the relationship private. She doesn’t react well– partly out of misplaced anger that he might be right, partly because there’s an undercurrent that he might be ashamed to have others know. 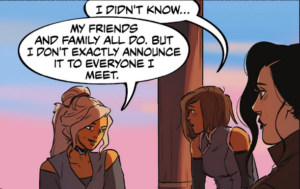 A particularly lovely bit of reassurance comes from Kya. She was previously confirmed to be gay by show creators, but now gets to be out in official canon. She gives the girls some advice, and also context on the history of queerness in the Avatar-universe. Like in our world, opinions towards these relationships have shifted throughout time and culture. (And hey, Avatar Kyoshi was bi! Sweet!) It will be interesting to see if Korra and Asami choose to become public with their relationship, and use their political clout to push for greater acceptance. I suspect they’ll need to come out eventually– in this world of increased journalism, hiding it for too long will be tricky.

For now, there are more immediate problems on their hands. Keum attempted to force the air benders to stand down from their defense of the spirit portal by sending the Triple Threat Triads to attack them. Furious, a flying-serpent spirit retaliated, temporarily possessing Tokuga. From the flashback to Avatar Wan, we know that such attacks can drive a person insane. While Tokuga seems to have escaped that fate, he did not come away unscathed. Turf Wars: Part 1 ends with him confronting Keum, now a mutated half-spirit himself, taking control of the company, and with a definite bone to pick with the Avatar. 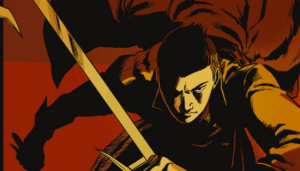 Turf Wars: Part 1 is an absolutely gorgeous piece, with spectacular visuals, cool combat scenes, a solid plot, and a deeply touching romance. If you were a fan of the original series, it’s an absolute must read, and I’m excited to see where the next two volumes go.