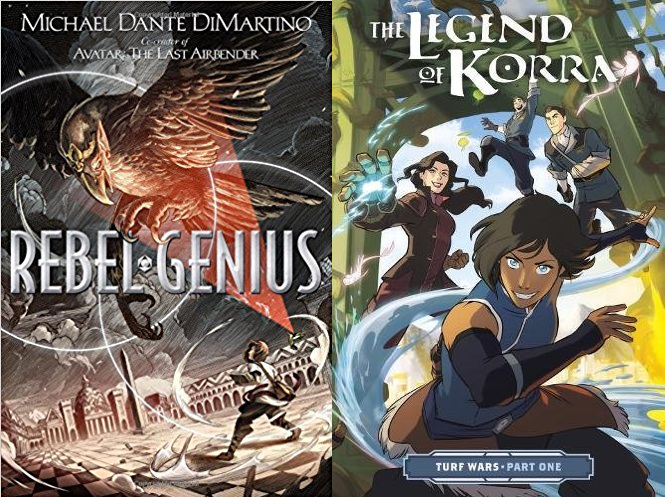 Michael Dante DiMartino is probably best known for being one half of the creative team that gave the world Avatar: The Last Airbender and The Legend of Korra – two series which have continued in comics and graphic novels. The first volume of The Legend of Korra: Turf Wars, released this month, with volume two set to hit stands in January.

In addition to graphic novels set in the Avatar universe, Michael Dante DiMartino is also writing a middle grade fantasy series set in a world where art is magic. The first book in the series, Rebel Genius, was published in October 2016. I got the chance to speak to him at this year’s San Diego Comic-Con, where he told me a little bit about the series, as well as the upcoming Korra comic books.  Check out our interview below!

THE GEEKIARY: Tell me about Rebel Genius.

MICHAEL DANTE DIMARTINO: Okay, if you don’t know anything about Rebel Genius, it’s a middle grade fantasy set in a fictional Renaissance world where art is magic. Artists have these bird familiars and they have these crowns that have gems on them, and through doing artistic moves – almost like a wand – they’re able to project these energetic sacred geometry shapes. So they’re able to create things, destroy things, heal people – there’s a musician in the group. In this empire there’s a dictator woman who has a Genius who’s been systematically wiping out artists’ Geniuses so she’s not threatened by their power.

THE GEEKIARY: It’s middle grade, but a lot of middle grade appeals to a wider audience. Do you think this one does, too?

MICHAEL DANTE DIMARTINO: So far it seems to. It’s definitely tonally similar to Avatar and Korra and how there’s kid heroes, explorers, adult themes of loss and tyranny and freedom. The main character, Giacomo, is an orphan so he’s alone in the world when the book starts out.

THE GEEKIARY: The cover was just revealed for the second one, right?

MICHAEL DANTE DIMARTINO: Yeah, a few months ago. The artist, Nicholas Delort, does these beautiful scratchboard illustrations. It shows the second empire that they visit in the second book, where the Geniuses take the form of these Pegasus horse-flying creatures. They have the same abilities, where they’re able to project sacred geometry, but they’re more of a warrior culture.

THE GEEKIARY: What made you want to write a book?

MICHAEL DANTE DIMARTINO: The original idea of having a book about artists being heroes was something I’ve had for a decade while I was working on Avatar and Korra. I was always working on it a little bit on the side here and there. It’s gone through a lot of different iterations of what it could be and what the story could have been, and then finally when Korra was wrapping up, it was time to decide what I was going to do next. I had an opportunity to find an awesome publisher and an awesome editor, and I was like, “Gotta take this opportunity.” It’s been fun.

THE GEEKIARY: We as a blog tend to focus on female-driven stuff and diversity in media, like non-white protagonists and LGBT+ protagonists. Knowing very little about Rebel Genius, sorry, is there a lot of diversity in it?

MICHAEL DANTE DIMARTINO: In the series as whole there is. In the first one… It’s based on Renaissance Italy so it is a bit European, I would say. But as they venture out into the world, the different empires have been historically pretty separate in this world, so there is some mixing of the different people. One female character – the musician that I was talking about – she’s half-Zizzolan (which is the kind of European culture) and half-Katugan (which we see in the third book and is based on Africa). Each one explores the different cultures. It’s kind of like Avatar. I love travel, I love different cultures and seeing the world through different perspectives. In book two, they go to a culture that’s based on India and the Mughal Empire around 1500. And then the Katuga is, like I said, based on Africa, but specifically western Africa and the Mali empire around the same time period. Starting with the Renaissance, I was like, “Well, everyone knows about the Renaissance, what else is going on in the world at this time?” There were these amazing other empires. It’s so crazy. I’ve learned a lot, too, historically, about what was going in the world. They had their own Renaissances and amazing progressive cultures, in some respects.

THE GEEKIARY: As a history nerd, what’s the most interesting thing that you learned when you were researching for the books?

MICHAEL DANTE DIMARTINO: It’s more of a general thing, but I guess what’s remarkable is seeing how – kind of like the Joseph Campbell thing, where there’s only one story for all these different cultures and the monomyth idea – all these cultures had very similar beliefs. I’m trying to figure out the magic in the different worlds, and stuff like that, and I find in western Africa during the time, there were these blacksmiths who supposedly control this power that basically sounds like the Force that people believe they have access to this greater power, and they were feared and revered, and it’s just amazing. It happened on Avatar, too, when you have this kind of vague notion in your head of what you want to do with the story or character, and you want to research and figure out how to make it more believable, and then you find out that fantasy idea you have actually existed, in a way. It’s like some kind of collective unconscious memory or something going on.

THE GEEKIARY: The Korra comics came out this year. What was it like to go back to the world of Avatar and Korra?

MICHAEL DANTE DIMARTINO: Yeah, it was cool. When we started the comics – it’s been a long process, it actually wasn’t –

THE GEEKIARY: It wasn’t that big of a break for you?

MICHAEL DANTE DIMARTINO: It was maybe six months by the time we started talking about doing them. But I love those characters. I like that we can continue their story. I like doing them in comics because I can do other stuff too. It doesn’t consume my whole life. And the Avatar comics have been a great way to continue that story – Aang and the kids and stuff. Every time I’m like, “There’s nothing else to do with these guys.” It’s also good practice with coming up with new story ideas and exploring different parts of the characters and seeing them growing up and mature more.

THE GEEKIARY: Are there going to be more Korra comics after Turf Wars? Do you plan on more comics?

MICHAEL DANTE DIMARTINO: That is yet to be determined. There are three volumes for this storyline, and then we’ll see.

Thank you again, Mike, for taking the time to speak with me!

Previous:“Marvel’s Guardians of the Galaxy: The Telltale Series” Episode 3 On August 22!
Next: “Kingsman 2: The Golden Circle” Use Total Solar Eclipse For Promo