W.C.K.D. Is Good; “The Scorch Trials” Is Better 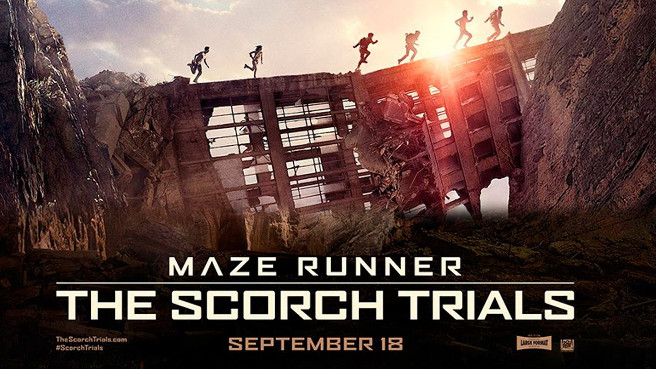 We last left our intrepid heroes as they were seemingly rescued, in spectacular fashion, from the nightmarish maze in which they had been imprisoned. The Scorch Trials picks up exactly where The Maze Runner ended, with the survivors being airlifted to safety in the form of a gigantic compound full of suspicious people, as well as a whole host of other kids. As it turns out, Thomas (Dylan O’Brien) and the others soon learn that their maze was not the only one. But since this is the second in a trilogy, things are not what they seem, and Thomas discovers that their captors are in fact just another arm of W.C.K.D.

Admission time: I have read James Dashner’s novels. However, I read them about two years ago (right after it was announced that Dylan O’Brien had been cast) and I haven’t read them since, so I remember virtually nothing about the books themselves, other than I wasn’t a huge fan of the writing. Therefore, there will be no nitpicky “that wasn’t in the book” criticisms, which is highly unusual for me. Instead, I can review this film as it should be – on its own merit as the second film in a series.

What I can say is this: The Scorch Trials is fantastic. I did the double feature, which is really the only way to see things like this, because it’s a lot easier to pick up plot threads and make connections if you literally just saw the first movie. Not that there are a lot of connections to be made; this series is pretty straightforward in that it doesn’t give you a lot of hints early, nor does it really reveal much as you go. I mean, you’re given some information, sure, but can you trust it? Or is this just another trick?

We learn a little bit more about W.C.K.D. and their search for a cure for the Flare – a virus that basically turns people into zombies, but they’re not really zombies, because they’re not technically dead. Instead of calling them zombies, they are “cranks” – and they are gruesome and terrifying and will probably give me nightmares if I spend too much time thinking about it. There are several well-shot action sequences where Thomas and company must escape from those infected without getting infected themselves, because they learn very quickly that despite what Ava Paige (Patricia Clarkson) told them in The Maze Runner, not all of them are immune. And though you know that Thomas, at least, has plot armor in being the main character, the rest of the group doesn’t have that same luxury, and just like last time, not everyone survives. 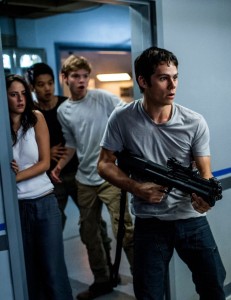 Unlike The Maze Runner, where the real action doesn’t start until we get our introduction to the Glade and its inhabitants, The Scorch Trials pretty much hits the ground running. Thomas seems inherently suspicious and paranoid and cannot accept that they are truly safe, as the others do. There is a lot of action in this second installment, and though you may be wondering how the hell these kids acquired the knowledge to shoot a gun in such a short amount of time, you will be on the edge of your seat for most of the movie. There are a lot of near misses and close calls as well as huge battles and epic explosions.

Director Wes Ball follows a strong first film with a sequel that is just as good if not better. Sure, some of the dialogue in The Scorch Trials is cheesy, but since this is basically a horror/disaster movie, that’s to be expected – and most of the worst lines are at the end. The music is phenomenal; John Paesano, who also did the music for The Maze Runner, delivers a hauntingly beautiful score that sets the tone quite well. Dylan O’Brien is extremely compelling and holds his own against heavyweights like Giancarlo Esposito (Jorge) and Aidan Gillen (Janson) – also surprise!Alan Tudyk – but the rest of the young cast perform admirably as well. The comedic timing in particular is on point, especially from Frypan (Dexter Darden), who is perenially so done with everything.

The sprawling desert landscape contrasts nicely with the claustrophobic feel of a ruined city crawling with potential threats. Early in the film there is a particularly beautiful shot of the core group spread in a line across the sand dunes, where they all pause and look back at the sound of a distant gunshot. I’d rather not spoil people, but it’s a fairly heartbreaking moment. On that note, I was more personally invested in the characters this time around, so the losses were a lot harder to take. I feel that even the new additions – like Rosa Salazar’s Brenda and Jacob Loflan’s Aris – were more well-developed than some of the characters from The Maze Runner.

Also, since I know this was a big criticism about the first movie: there are more women in this one. True, some of them don’t get introduced until near the end, but Brenda alone ups the badass quite a bit. Is there a bit of a love triangle? Of course there is. This is a movie. Fortunately, the characters have more important things to worry about and are too busy trying to stay alive to deal with any potential romances.

The Scorch Trials is a solid second movie that builds upon the first one while simultaneously setting up the third and final installment. (To the best of my knowledge, The Death Cure will not follow the recent trend of splitting the final book in two and will remain as one film.) I saw this in a virtually empty theater, yet my experience seemed more like I saw it with a huge, responsive audience. I laughed, I cried, and yes, I reacted to the jump-scares in the way that gives them their name. I highly enjoyed The Scorch Trials, and I suspect a lot of you will as well.

Previous:“Supergirl” Pilot Review — What Makes a Hero a Hero
Next: Doctor Who 9×1 Review: The Magician’s Apprentice