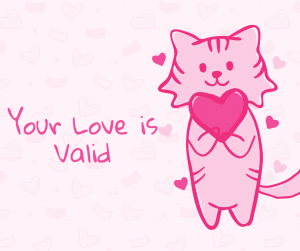 When I was younger, I loathed romance. I cringed while watching Disney movies that had romance, turned my nose up at the romance novels on my mother’s shelf, and gagged at the thought of kissing a boy one day. Chocolate and flashy cards defined Valentine’s Day for me. As I transitioned to middle school then high school, I realized how different I was from my classmates. By then, I was afraid to discover what romance really meant for me. This webcomics special features LGBTQIA+ comics about the various kinds of love outside of the cishet narrative.

Until my late teens/early twenties, I viewed romance through a cisnormative lens. Narratives about asexual/aromantic people, nonbinary and gender diverse people, polyamory, queerplatonic relationships (intimate friendships), and non-heteronormative relationships were rare for me. Even when I found out about Valentine’s Day cards for gay and lesbian couples, it was still cisnormative.

Fast forward to today, and I’m currently in a romantic relationship with a trans woman. I recently came out as non-binary transmasculine. I’m still exploring my sexuality. Today, I want to celebrate the love and relationships that deserve notice. Your love is valid regardless of your sexuality or who you love. People who don’t experience sexual and or romantic attraction are valid. People in a queerplatonic relationship are valid. Polyamorous relationships are valid.

Below are ten comics that explore other forms of romance and love, from relationships between trans people, polyamory, queer platonic relationships, the aro/ace spectrum, and other non-cishet narratives. 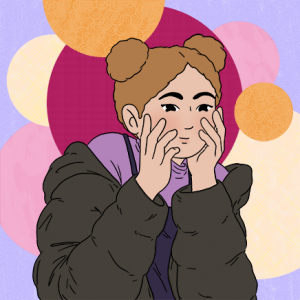 Sabine navigates relationships and questions her sexual orientation during her time at college. She learns about her asexuality as she interacts with her friends and potential partners. I enjoy reading about Sabine’s personal journey and how she learns from her mistakes. 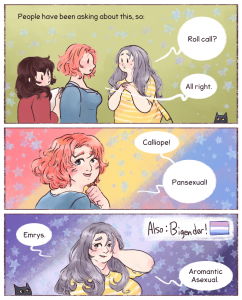 This heartwarming and gorgeous autobiographical webcomic features a polyamorous queerplatonic relationship. Some episodes discuss the aro/ace (aromantic and asexual) spectrum and healthy relationships. 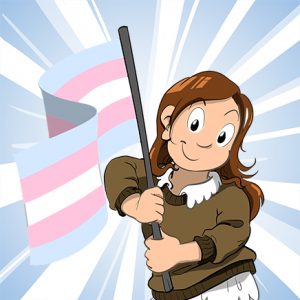 This long-running webcomic (since 2014) dismantles misconceptions about transgender people. Labelle covers topics about dating, sex ed, transphobia, and gender identity. I love following her characters Stephie (trans girl) and Ciel (non-binary) as they explore their gender identity, relationships, and just life in general. 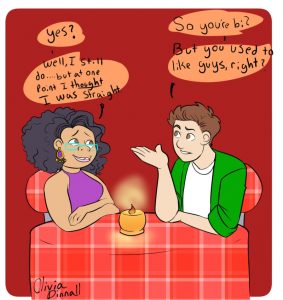 Bi-Assed by The Purple Alien

Being biracial and bisexual isn’t as “trendy” as some people think it is. The creator shows this in her webcomic Bi-Assed. Episodes include microaggressions and misconceptions about biracial and bisexual people, demonstrating the ignorance and fetishization, and stigma against people who don’t fit into one box (and shouldn’t). 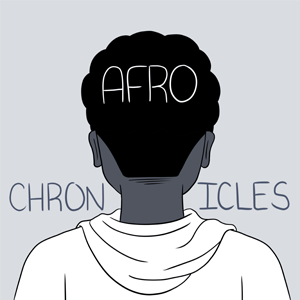 An autobiographical slice of life webcomic about the creator’s (Black trans man) journey of self-discovery and transition. Each episode details Jayden’s experiences at school and with his friends and family. Also, check out the creator’s other comics.

Confessions of a Demisexual by Courtney Wirthit

Some people don’t experience sexual and or romantic attraction until they form an emotional bond with their partner(s), and that’s okay. Wirthit describes it as being part of the in-between or gray area of allosexual and asexual (also called the Grey-A Spectrum). This memoir comic elaborates on the joys and challenges of being demisexual. 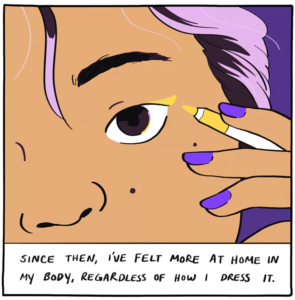 Visibility Has Its Rewards: Six Cartoonists on Gender and Transition by The Response (various cartoonists)

Cartoonists from The Response have come together to create this collection of comics about being trans and non-binary. The creators share their stories about transitioning, coming out, gender identity, and self-discovery.

Nothing Wrong With Me: My Journey from Evangelical Christian to Asexual Trans Man by Dylan Edwards

Edwards shares his story about discovering and coming to terms with his gender identity and sexuality. Raised as an evangelical Christian, Edwards first mistook his disinterest in sex for a strong belief in virginity and moral purity. He looks back to when he started distancing himself from his religion and tried to figure out his gender and sexual identity. 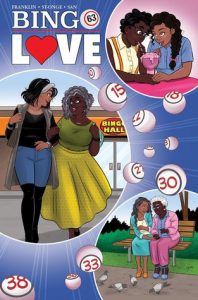 I first read this back in 2018 and it has stayed with me since. The story follows two Black women who reunite later in life after queerphobia separated them during their teenage years. Read Farid-ul-Haq’s review of this beautiful comic here. 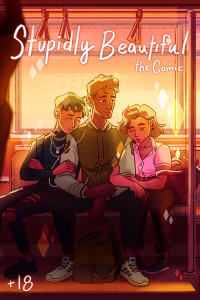 An accompaniment to the creator’s novel series, the webcomic explores sexuality and gender roles in a polyamory relationship. The characters (in college) and their sexual exploration feel real, and some of the episodes are poetic and emotionally resonant.

Do you have a favorite non-cishet comic that isn’t listed here? Feel free to comment. I’d love to hear from you!