Why I Stopped Trying to Act Cool Around Celebrities

Not to toot my horn or anything, but I can be cool, sometimes. Of course there is one circumstance where I will ALWAYS fail at even entry-level coolness. Every single time I interact with someone well-known or famous, particularly if it’s someone I love and admire, I WILL act like a total dork. That’s a fact. I used to try to be cool. I would pretend I didn’t care, like meeting my celebrity crush was so whatever, but the enthusiasm would always seep through the nonchalance. Then I would berate myself for failing to maintain my cool, which was an impossible task because I am fangirl to my very core. 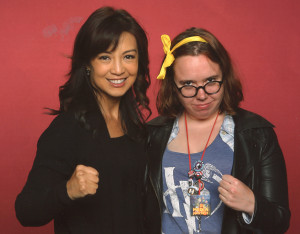 I’ve come to terms with the fact that I love things with an extremely enthusiastic passion that might come across as a little intense to some. I’m not completely out of control. I have enough common sense to know when it’s acceptable to approach an actor to ask for an autograph. I’m not going to tweet explicit and/or weirdly specific sexual requests to someone I don’t know and, when the occasion calls for it, I can maintain my professionalism to conduct interviews for The Geekiary. At the same time, there is absolutely no way I am going to be able to hold in the freak out entirely.

There is a 100% chance that if a celebrity talks to me I’m going to start blabbering uncontrollably about stuff that doesn’t make sense outside of my head. Or giggle until I say something like “you face good” and then run away. Or maybe get too deep too quickly by talking about my personal battle with depression and anxiety. Whatever happens, there is no way that I come out of the interaction looking like anything other than a total loser. And you know what? That’s okay. Because that embarrassingly dorky loser is part of who I am. 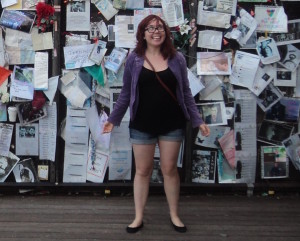 A side effect of my unending fangirl enthusiasm is that I have trouble controlling my reactions to stuff, as everybody that has had to comfort me after a major character death will attest to. “I know it’s 3am but Ianto Jones died. HE DIED.” I mean I LITERALLY fainted at a Green Day concert once because Billie Joe Armstrong touched my hand. That is a thing that actually happened. But then I get that wonderful feeling of loving something completely and immersing myself in that thing until it touches my soul. I wouldn’t give up that feeling for the world.

After years of trying to prevent these reactions, I finally realised something that probably should have be obvious all along. The only person my embarrassment was hurting was myself. Sure, the poor celebrity that has to deal with my absurdity might get a little annoyed, but I very much doubt I’m the only person that fails to function in their presence. Really, as long as I’m not crossing any boundaries, why does it matter if I burst into tears at a photo op or print out and frame the tweet they sent me? 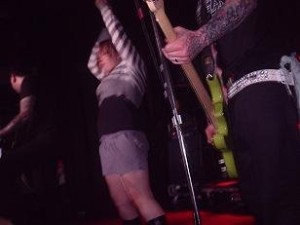 Let me tell you, since I let go of the possibility that I was ever going to make a good impression, my celebrity encounters have become so much more enjoyable. I don’t mean that they have changed at all. Accepting my inevitable failure hasn’t made me any cooler. I still embarrass the crap out of myself every single time. That’s a given. I just don’t hate myself afterwards, so I can now enjoy the experience without a whole bunch of self-loathing accompanying it.

Don’t get me wrong. I still get super embarrassed. I get that empty feeling in the pit of my stomach that reminds me I have made a fool of myself yet again. I’m not some kind of master of self-acceptance. It’s just that I used to get upset because I felt like I had blown my one chance to show someone that means the world to me how awesome I can be, and I’m not just talking about some impossible romantic fantasy (although I have those, too). It’s about expressing appreciation for someone that has had a huge impact on you.

The thing is: that messy hysterical fangirl, she is who I really am. If I didn’t let my fangirl flag fly when I met celebrities, then I would be lying, and that goes against everything I want out of the experience. This is who I am. If my friends and family can accept my bizarre emotional over reactions, then my fave celebrities can too. And hey, if the worst thing that happens in a day is that someone is so excited to meet you that they say something silly, then you’re having a pretty good day.

Here’s the deal: I am always going act like a total dork when I’m in the presence of someone I admire. And yeah, sometimes that means I’m going to be disappointed because I didn’t get to say something I wanted to, or I didn’t get the reaction I hoped for. But it also gave me some hilarious stories that continue to make people – including some celebrities – smile to this day.

Go forth and fangirl, as embarrassingly as you want to.

Previous:Character Analysis: Why Claire Dearing is the unsung heroine of Jurassic World!
Next: Can’t Get Enough Lois Lane? She’s Coming Back to “Double Down”!