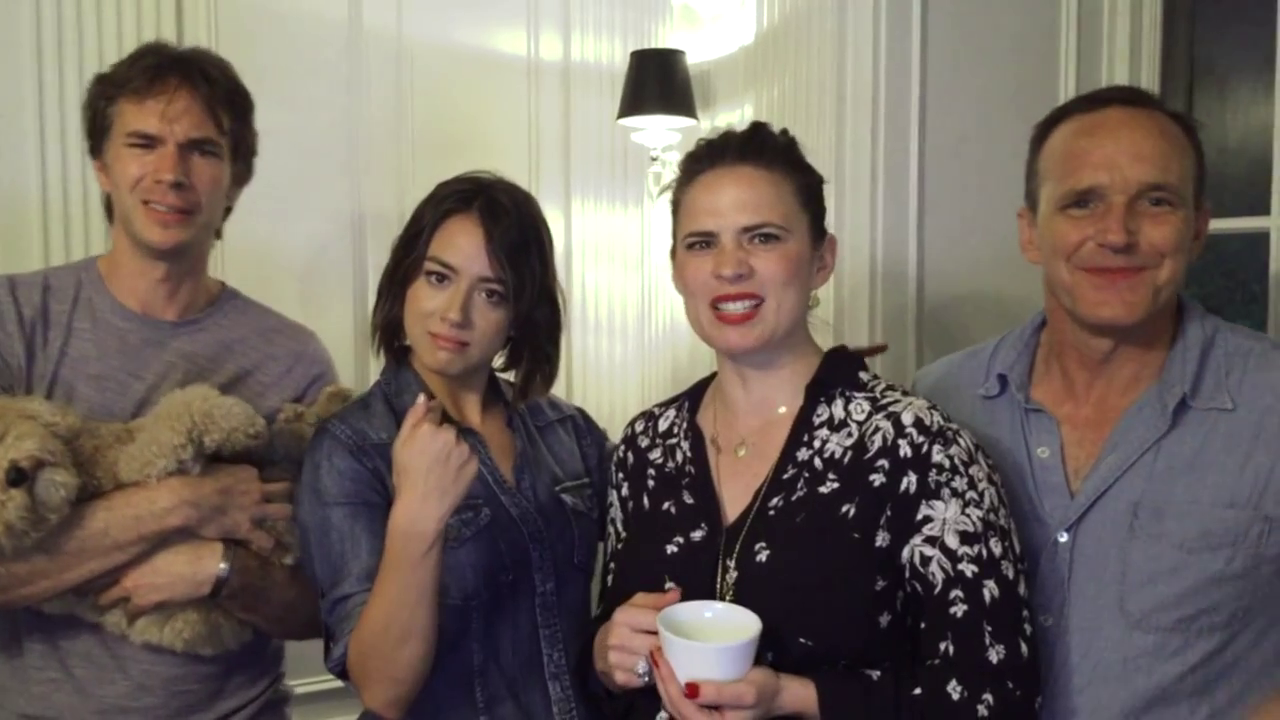 The most epic battle in the Marvel universe is about to begin. No, I’m not talking about Captain America: Civil War. I’m talking about the second round of the lip-syncing war between the casts of Agent Carter and Agents of S.H.I.E.L.D. If you missed round one – which took place during SDCC this year – then I feel bad for you. Luckily there’s still time for you to catch up before the war gets underway.

If you don’t spend all your time reading Hayley Atwell’s Twitter like I do, then you might have missed her love for making Dubsmash vids. Anyway, this obsession escalated into a full-on battle with Clark Gregg and Chloe Bennet jumping into the fray at Comic Con. Hayley Atwell and her lovely castmate James D’Arcy won that battle when they recruited Captain America himself Chris Evans. Now the Agents of SHIELD have a chance to redeem themselves, and this time we get to decide the outcome.

Okay, so this battle is a little more organised than the first round, and maybe that messes with the spontaneity, but it’s still super fun and it’s kind of fantastic that these lovely people have found a way to use this silly social media platform to do some actual good.

As announced in the vid, this round of the epic Dubsmash Marvel showdown is for charity. Two charities in particular; Team Carter is supporting Stomp Out Bullying, and Team SHEILD is supporting St. Jude Children’s Research Hospital. They have set up a page on Crowdrise, and every dollar you donate counts as a vote for your favorite vid. There will be three rounds starting on September 9th.

Added bonus – everyone that donates goes into the draw to win a trip for you and a guest to Hollywood to have lunch with Hayley, Clark, James, & Chloe. AND you’ll get to star in a Dubsmash video with them, which is pretty much the coolest part.

This is genuine good fun for a good cause – and I don’t just mean the freedom of Chloe Bennet’s dog, who James D’Arcy has taken hostage for the crime of being too cute – because everyone wins. We get to see more hilarious and increasingly extravagant Dubsmash vids from our faves AND we get to support some awesome charities. It’s frivolity for a cause and it’s great.

P.S. You can see all the previous Dubsmash vids collected together on the Crowdrise page.