Every once in a while you find a mangaka who consistently hits the right buttons. For me, that mangaka is Yamamoto Kotetsuko. Right now I’m making my way through all of her works and I’d like to recommend three stand out series that she’s done that are worth checking out. What I love about Yamamoto Kotetsuko is how most of her pairings tend to defy common tropes found in yaoi manga and anime. One consistent problem I’ve stumbled across in a lot of anime and manga is the lack of consent or possibly dubious consent between a lot of the primary pairings. Most of Yamamoto’s couples are very much consensual, happy, and free of that type of drama. There are dramatic elements in her work, but the couples themselves really feel like they are in love with each other. It’s incredibly refreshing. 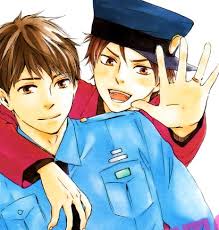 This is by far my favorite manga series. It’s not just my favorite Yamamoto work or my favorite yaoi series, but my favorite manga PERIOD. Aki and Ueda have stolen my heart in the best way imaginable and it feels like I can’t possibly praise this work enough in just a few short paragraphs. It’s truly one the happiest couples I’ve ever encountered and, for once, I’m actually grateful to have stumbled into a series that’s currently in progress. I want more of this series. I want it to go on for a very long time, get an anime adaption, and become a well-known hit. I believe in this series entirely.

The story revolves around Gotouda Aki, the son of a Yakuza boss, and Ueda Tomaharu, a police officer at a small police office. These two star crossed individuals just happen to fall in love. Their opposing careers aren’t really a problem for either of them, but the people around them are often baffled at how a cop and a Yakuza make it work. Ueda is not really a judgmental person, so when a very obviously Yakuza looking Aki shows up on his doorstep he actually converses with him instead of writing him off as a common criminal. Aki used to hate cops, but when Ueda becomes his savior after an unfortunate underwear theft incident (no really, that’s how they met), he falls in love at first sight. It seems irrational, but Ueda’s career doesn’t matter much to Aki because he’s so head over heals for him.

The two encounter numerous problems due to their opposing careers, including Aki’s family, other criminals, and cops who judge Aki based on his appearance without giving him a chance. Poor Ueda gets head injuries quite regularly due to the increased danger associated with being in a relationship with a Yakuza, but that doesn’t diminish his love for Aki in the slightest. In fact, each time either of them are put in danger, it strengthens their love for one another.

Also, Aki is adorable when he blushes. No seriously, give it a shot just for that. He’s the cutest Yakuza you’ll ever see in your life. 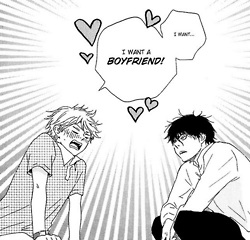 I’ve always been a fan of supernatural elements in my fiction, so when I saw that the same author that created Honto Yajuu had a demon/human romance I leaped at the chance to read it. I was not disappointed. Beyond just the fact that one of the characters in the primary pairing is a supernatural creature, it also features a consensual romantic plot that Yamamoto seems to excel at. Unfortunately this story isn’t completely free of non-consensual acts, but our love birds are, at least, so you can enjoy the main pairing problem free.

The story centers around Rikiya, a shy freshman who is well aware that he’s gay but has never had a boyfriend. He decides to give a dating website a shot, but gets drawn into an amateur porn scheme and is nearly the victim of a sex crime. The wallpaper of the hotel room just happens to have a demonic summoning symbol on it, and when his ‘dick juice’ (exact quote from the series, by the way) makes contact with it the demon Endo suddenly appears. Endo saves Rikiya and offers him a wish. From here a romance between the two starts to develop.

This series also has a sequel that focuses on a secondary pairing. The new series is called Kimi to Kore Kara and it looks very promising. I was a much bigger fan of the primary pairing, though, so I’m not quite as enamored with this one as I am with Konya mo Nemurenai, but I’m happy that we get to continue playing around in this world for a while longer. 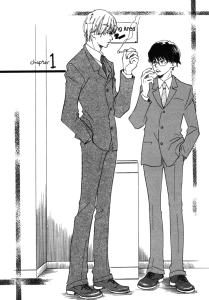 I grew so used to Yamamoto’s stories being mostly fun and fluffy in nature, but this one starts out with a huge tragedy. I was thrown very off guard by it, but the main pairing won me over really quickly, so I stuck with it. This series also has some tropes that some people might either really enjoy or find problematic. The main pairing are, as the title implies, brothers, but only by marriage. One of the brothers is also a teacher while the other is a student, so we have a not only a family dynamic at play, but a teacher/student relationship as well. These are things that you either love or hate, so consider both of these things before diving into the series.

This story centers around Chris Watanabe, a high school teacher, and his step brother Wataru. Shortly after their parents marry each other, they die in a tragic accident leaving these two brothers with only each other. They become reliant on each other and a love starts to blossom between them. I found their relationship very organic and touching, but also at odds with the student/parent and the family dynamic. Their love for each other pushed beyond these problems though, and I found myself ultimately rooting for the pairing.

Beyond the central pairing, this story also has a gender variant character that I found really appealing. I’m hesitant to label the character as a trans woman as the translation I read still used masculine pronouns, but the character enjoyed dressing and presenting themselves as a woman whenever possible. The other characters’ acceptance of them was also very touching and I was happy to see this type of representation in a manga. It’s not something I’ve run across very often, so the positive vibes I got from this part of the story really stood out to me.

Hopefully you give these three stories a shot and, with any luck, I may have more Yamamoto recs in the future. I’ve only read about five of her stories so far and there are many more left to go. Happy reading!