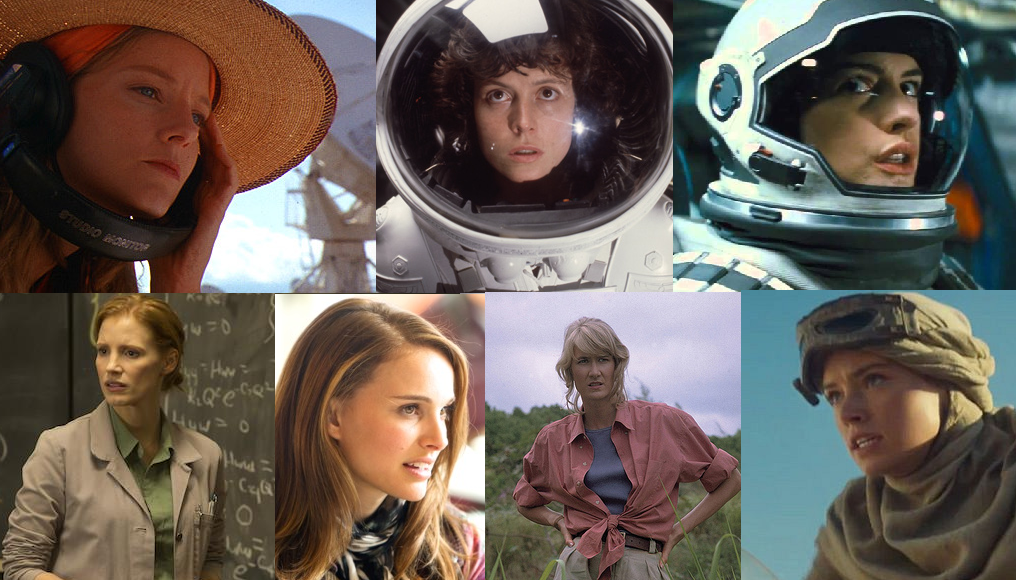 Encouraging women to pursue careers in a STEM field (Science, Technology, Engineering, Mathematics) is hugely important to me.  My personal area of expertise may be science of the fictional variety, but even there I found a lot of inspiration.

Last month when I was horribly ill for the better part of a week I decided to marathon some of my favorite science fiction movies as I drifted in and out of consciousness.  Whenever I’m feeling glum, I find myself drawn back to Contact, the 1997 science fiction film starring Jodie Foster, which I saw when I was only 11 years old.  It had a huge impact on me at the time, and I find myself re-watching it on occasion even now.  When I was younger I didn’t really see the film through a feminist lens, but now that I’m older I realize just how amazing it is to have a woman in a STEM field portrayed so positively and realistically in a sci fi movie.  Then I was reminded of Intersteller, which had two incredible women scientists (I ended up watching that, too, as I nursed myself back to health), and soon I was stumbling down the rabbit hole toward creating a list of all our favorite Sci Fi STEM ladies in film. 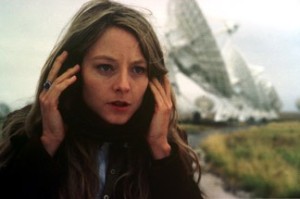 Doctor Arroway may be a bit dated, but she’s my personal favorite.  This was one of my favorite movies when I was younger and I continue to watch it when I’m feeling down even to this day.  Doctor Ellie Arroway is a genius scientists who works for the SETI Program, aka the Search of Extraterrestrial Intelligence.  She’s shown having an interest in space and communications from a young age, and her father is more than happy to foster her interests in these fields until he dies when she’s still very young.  As she grows older, she gets pushback from other scientists as her chosen career path is looked on as a “waste of time.”  That is, until she picks up a signal from space and then suddenly all these guys who were putting her down are all super excited about the project.  Funny how that works, isn’t it?

The movie is based on the Carl Sagan novel of the same name, and co-written by him and his wife Ann Druyan.  It’s not only a highly accurate depiction of how our first contact with extraterrestrials may play out, but also a really fitting commentary for how women are often pushed to the side in STEM fields by their male counterparts.  I’m not sure if the latter theme was on purpose or completely by accident, but even from a young age I looked up to Doctor Arroway as a feminist icon. 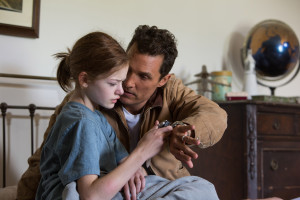 Intersteller has not one, but two incredible women in working in a STEM field.  The entire premise of the movie is that humanity has lost its motivation to travel to space, which is resulting in certain doom on Earth as our resources rapidly deteriorate.  The protagonist of the film is a man, but there are two amazingly smart, brave, and influential women weaved throughout his story that make a giant impact on the plot.

The first is his own daughter, Murph Cooper.  He encourages her from a young age to think outside the box and pursue STEM-related interests, even though society at large has begun to frown on such endeavors.  Without spoiling the plot too severely, her interest in space and mathematics becomes crucial to the plot, perhaps even moreso than her fathers’ contributions.  It’s hard to talk her up without pretty much spoiling the entire ending of the film, so I’ll just say she’s damn important, so stop what you’re doing and go see this film right now.  She’s probably my favorite STEM woman in fiction next to Doctor Arroway.

The second STEM field woman in the film is Doctor Amelia Brand, who is the daughter of who’s heading the project that’s trying to save humanity from extinction.  Like Murph, it’s clear that her father has encouraged her interest in STEM and believes in her capabilities fully.  She’s the second lead in the film and much of the plot would not be possible without her.  The only downside to her character is that there is a brief moment where a romantic entanglement becomes the focus of her narrative, but it’s brief and is redeemed very rapidly.  Her plot is still primarily focused on her contributions to the story and not her as merely a love interest.

It should be no surprise that we’re big fans of the Marvel Cinematic Universe here at The Geekiary.  While Thor isn’t my favorite piece of the franchise, my absolute favorite part of his films is Astrophysicist Jane Foster and her interest in science.  In fact, her fascination in science has spawned countless memes that make me laugh until my gut hers.  No really, here’s some of my favorite memes about it: 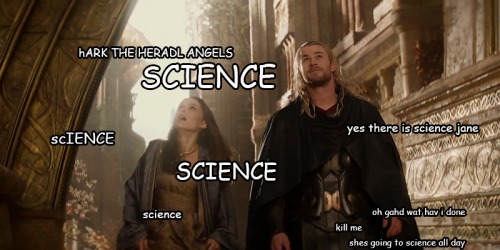 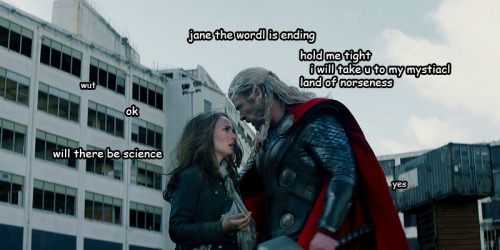 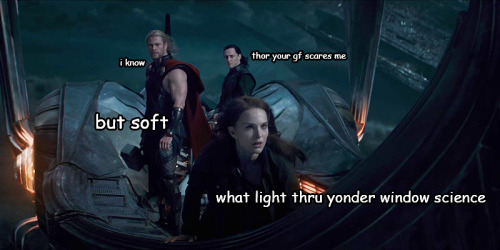 Pretty much every time a Thor film comes out, I’m way more keen on seeing what science adventures Jane is going to participate in rather than the actual plot of the film.  No offense, Thor.  You’re cool and all, but I mean Jane Foster.  Surely you understand.

When I was four years old and in preschool I told my teacher that I wanted to be a paleontologist.  My teacher automatically thought my mom had to have been coaching me to say that, but no man, I was just crazily obsessed with dinosaurs.  At the time I just knew I wanted to “dig up dino bones” all day, every day.  When I was seven years old Jurassic Park came out and, while I was probably too young to see such a violent film in theaters, I pretty much strong armed my mom into taking me to see it.  While the point of my post is to show how women in science fiction can inspire real life women to pursue careers in STEM fields, this actually had the opposite affect on me.  This inspired me to pursue a career in media analysis and even made me a bit more of a feminist.  Let’s not forget this beautiful moment:

And also this one:

But I digress, while I may not have an aptitude for science myself, Doctor Ellie Sattler was hugely important.  She was an expert in her field, invited to a revolutionary new theme park because of her expertise, and was also a badass in survival situations at the same time.  She’s iconic in so many ways and she’ll always stick out to me as a defining moment in my childhood. 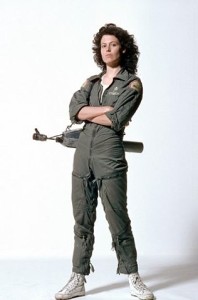 Speaking of badasses in survival situations, let’s talk about Ripley.  Sigourney Weaver’s iconic character earned her an Academy Award nomination and defied gender stereotypes.  At the beginning of the film, she’s already pushing boundaries simply by being a female warrant officer on the Nostromo space vessel.  She’s a high ranking official on a space mission primarily dominated by men, but when things go south due to that really gross chest bursting alien gets lets loose on their ship, she also becomes a badass.  In fact (spoiler alert) she’s the only person to get off the Nostromo alive and has to contend with these gross alien things continuously for the rest of her life (or at least what we know from the three sequels), but has to save many other helpless humans who don’t believe her when she says these gross alien things are really bad news.  Like no really please don’t go back to the planet.  What are you doing?  God, guys, just listen to Ripley.  She was there the first time.

I may be stretching the definition of “STEM” for this one.  But you know what? I don’t care.  Her official title is “Scavenger,” but she shows a strong aptitude for engineering.  (Spoiler alert) While some of this may have to do with the Force, the fact that she is happy to explore engineering tasks even in situations where those around her initially seem more qualified (I will never be over Han’s face when she just settles in next to him and fixes his ship) earns her a spot on my list.  Her existence in the franchise has already proven to be important, as was illustrated when Geekiary author Emily posted pictures of her daughter cosplaying as Rey (which subsequently went viral, wow!).  Little girls can now be Jedi just like little boys.  While we all know they could have done so all along, now they have visual representation that proves to them that these things are possible.  Maybe some of these little girls will also be inspired by her engineering or piloting abilities and choose to pursue careers that are usually dominated by men.  Rey is important for so many reasons, and her STEM inclinations is only a small part of why she was so desperately needed.

The following women are also worth noting.  They only weren’t included in the primary count because I either didn’t know enough about them to write about them, or didn’t feel a personal connection with the films to an extent that I could create any sort of meaningful content.  But that doesn’t mean they are less important at all!  Please comment below with your favorites, and let’s celebrate these amazing STEM women!

Previous:Introducing The X-Files Vinimates Mulder & Scully from Diamond Select Toys
Next: Is Naruto’s Sakura Haruno a Weak Female Character? I don’t think so!