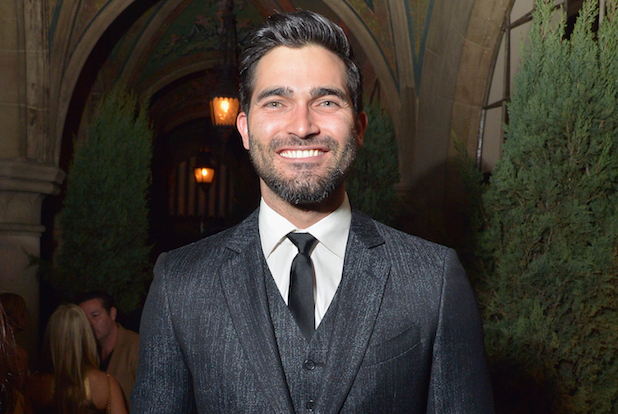 I thought there was no limit to the levels of bad movies I would sit through in order to watch Tyler Hoechlin on screen. But it turns out that the limit is 50. As in Fifty Shades of Grey.

Yesterday, pictures of Hoechlin being picked up at the Vancouver Airport (with a ginormous suitcase) circulated on Twitter, prompting fans to speculate what he was in Vancouver to film. Early reports mention that the van that picked him up said Fifty Shades on the side, but some fans – including this one – hoped that wasn’t true. Then TheWrap reported that Hoechlin had indeed been cast in Fifty Shades Darker as Boyce Fox.

First off, I’d like to state for the record that I am fully aware that no one – especially not me – really has the right to tell Hoechlin what roles he can and cannot take. I don’t know him personally, or his limits, or his bank account, and it’s not my place to police his career. He’s not a big enough star that he can just turn down roles that are offered to him, and as an actor he needs to stay working.

Not to mention that this is a well-known and talked about series, which will give him more visibility. Plus his character (what kind of name is BOYCE, honestly) is apparently so miniscule that fans of the book couldn’t even remember who he was – because he was only mentioned in the books, never seen, and his role will be “fleshed out” in the movie. So there’s that.

That said, I’m disappointed in this news, mostly because I have a ton of issues with the Fifty Shades series, and it’s simply a venture that I cannot support, even with Hoechlin’s involvement. It’s not just the fact that it’s a gross misrepresentation of BDSM culture or that it romanticizes an unhealthy relationship… It’s just flat out a bad movie. I mean, yeah, it made a lot of money – but commercial success isn’t an indicator of quality. Critics mostly panned its poor acting and bad writing, not to mention its pacing issues and its portrayal of sex scenes. Pretty much the only good thing about this movie is the soundtrack (which is, sadly, excellent).

I love Hoechlin. I do. I want to support him in everything he does because I am a fan not only of his acting but also him as a person. But it looks like Grizzly Rage will remain the worst movie I have watched for Hoechlin. Sorry, man. I want you to have a great film career, but god, at what cost?

One bright spot in this news is the knowledge that former Teen Wolf castmate Dylan O’Brien will be in Vancouver next month to start filming The Death Cure, the third installment in the Maze Runner franchise. Maybe the two will hang out again and we can get pictures, because I have really missed seeing the two of them together.

Keep your fingers crossed that Richard Linklater’s Everybody Wants Some, which comes out in April, will help Hoechlin land some meatier roles in better projects. Until then, godspeed, man. I hope you nail the hell out of this role, and you can rest assured that while I can’t in good conscience spend money on this film, I will probably see your other three upcoming movies in theaters more than once.

Previous:Bombs over Fandom: Frustrations with the Cartoon Network Scheduling System