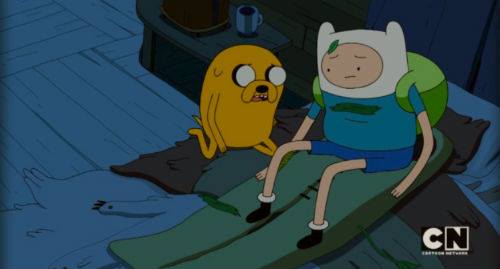 Adventure Time has commanded its place as Cartoon Network’s best animated show for four years now, and in that time it has given us many dark and disturbing episodes. While most of these episodes have cut through their creepiness with a biting humor (usually aimed at its adult audience), the season six premiere was predominantly humorless and therefore the first truly distressing episode. 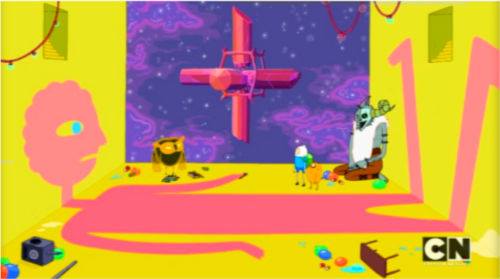 This is not to say that the premiere, a half-hour special composed of “Wake Up” and “Escape from the Citadel”, wasn’t funny. The episode opened with a lighthearted party at Prismo the Wishmaster’s, and the appearance by the sarcastic Shelby (who only wants to score points with his girlfriend by getting her a pony) was one of the most amusing interactions in the episode. However, it was clear from Finn’s first appearance (collapsed on his bed in reflection) that the plot wasn’t going to be a basic adventure for our two heroes.

It’s obvious that Adventure Time isn’t interested in beign a run-of-the-mill cartoon with disconnected episodes due to the fact that Finn as a character has aged (in conjunction with the aging of his voice actor, Jeremy Shada, whose own voice has matured during the last four years). If anything, Adventure Time has evolved into a self-aware and expansive science fiction show that explores intangible topics such as time, the cosmos, life and death, the consequences of our choices, alternative universes, and more story lines that have long been staples of the science fiction genre.

Adventure Time seems to want to make its viewers uncomfortable by leading them to question their own understanding of this seemingly infinite universe. Yet for all of these wide and abstract ideas, the show never neglects the minute details of human life…and “Wake Up” and “Escape from the Citadel” focused on a time-honored and difficult topic for children and adults to face: neglectful parents. 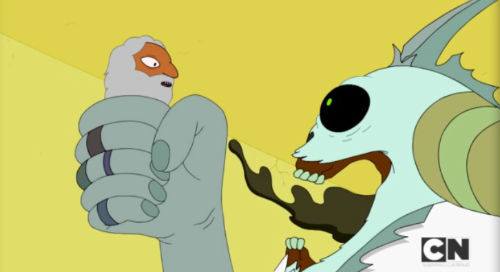 The main plot of the premiere was centered on Finn’s journey to find his human father. Though he is uncertain at first, when Finn discovers that his father is located at a cosmic prison called the Citadel he becomes excited, and assumes – with blind optimism – that his father must be a guard there.

Of course the journey to the Citadel includes several trials, the most shocking of which was the death of character who may be minor but is much beloved by Adventure Time fans. It also involved the return of the Lich, the undead evil entity and the only truly terrifying character in Land of Ooo. Unlike other disturbing characters in Adventure Time, the Lich is no more than a dark force that only exists to bring mayhem and death. In its climactic speech to Finn, the Lich reveals its plans and demonstrates that rather than simply being a villain, it is a powerful force. In the creepiest line ever uttered in Adventure Time, the Lich declares, “I am the end.”

Yet the battle between Finn and Jake and the Lich is merely a backdrop to the conflict of Finn meeting his disappointing father and dealing with his conflicting feelings on this matter. For all his adventuring and being a hero, Finn is still a young boy, and the episode emphasized that by portraying Finn as desperately wanting the approval and love of a man he’s never met simply because that man is his father. Only Finn’s brother Jake can see the falseness of his human father, and Jake encourages Finn to focus on himself rather than on trying to please this dismissive and self-interested man. 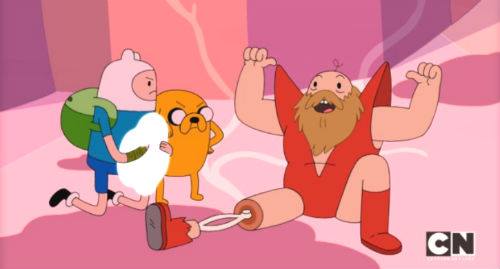 The hurt that Finn experienced – and his eventual acceptance that he doesn’t need his human father – were incredibly moving. For the first time, he seemed to truly mature, with the show hinting at the man he will become. Jake’s love for his best friend and his kind insistence that everything would be alright also helped make the season six premiere one of the most genuine and affecting episodes of the series.

The episode also concluded with a change to one of our main characters – a change that eagle-eyed fans will have seen coming ages ago. While it seems tragic, it’s clear that our heroes will remain heroes, and persevere as they always do.