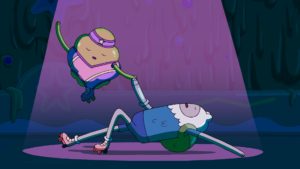 The wild ride of Adventure Time: Elements continues in “Slime Central” as Finn and Jake blends in the Slime Kingdom to retrieve one of the elemental jewels needed to save Ooo.

“Slime Central” begins with the brother duo dropping down on Ice King’s skyhooks and into the Slime Kingdom. Finn wonders if it’s a good thing that Simon and Betty are hanging out together, saying he feels there’s something weird about the ethics of it. Jake replies, “Well you don’t wanna stare at happiness too hard … ‘cause it stares back,” which is phrased rather similarly to a certain Nietzsche quote:

“He who fights with monsters should look to it that he himself does not become a monster. And if you gaze long into an abyss, the abyss also gazes into you.”

(Definitely not foreshadowing something there, AT. Nope.)

The boys slime themselves to blend in, but the kingdom seems deserted… until the sounds of a lively party reach their ears. There’s a giant skate party surrounding Slime Princess, who has grown to almost fill up the entire room-turned-skating-rink.

The Slime Elemental crown jewel is wedged deep inside her head. Finn rushes in to retrieve it, but only bounces against her body. Before he and Jake can come up with a Plan B, they’re interrupted by Lumpy Space– sorry, Lumpy Slime Princess. They were further interrupted when the crowd starts chanting “Snack Pack! Snack Pack!”, which is the team name of the slime-ified versions of Breakfast Princess, Wildberry Princess, and Hotdog Princess.

Among the crowd, Party Pat, er, Party Splat sneers at the Snack Pack, who retaliates by challenging his team to a skate battle. Both teams skate, dance, and show off some sweet moves, while Slime Princess judges the performances. The losers are put in The Losers’ Cage and are stripped of their skating rights, while the winners…

The prize for winning is “glorious” absorption into Slime Princess’s body, which explains how she got so big. The crowd chants, “Skate to Assimilate!” as the winners happily enter SP’s body. Individual bodies melt away– their laughing, joyous faces being the last thing to fade– until they’re completely assimilated.

Horrifying as it is, this gives Finn an idea– if they could win a skate battle, he could grab the jewel and have Jake pull them to safety with his stretchy powers. When the risk of absorption is brought up, Finn simply quips, “We’ll just believe in ourselves way too much. She can’t absorb us if we’re self-absorbed.”

They need three people in a team to compete. LSP says she can’t help because she’s already in a team. Almost immediately after, her old team ditches her. Angry and hurt, LSP joins up with Finn and Jake and challenges her old team.

The DJ starts up some cool beats, but Jake interrupts him. Then he takes out his viola and starts playing, saying this was better than dancing. The audience seems confused at this unexpected turn, and Slime Princess groans irritatedly. LSP dances with Finn to salvage the situation, doing spins and lifts, as what the crowd would expect. But they’re trying way too hard that they only end up flinging each other into their audience. It ends with LSP accidentally throwing Finn into Jake and a viola bow getting wedged between Slime Princess’s eyes.

LSP, Finn and Jake get thrown in The Loser’s Cage to await punishment– “shameful” absorption which is basically the same thing as glorious absorption, only they enter from behind where no one else can see. 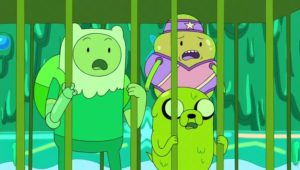 LSP, Finn and Jake inside The Loser’s Cage in “Slime Central”

For a while, Finn’s plan works. They resist absorption and he’s able to grab the Slime jewel. But their getaway relies heavily on Jake, who couldn’t resist long enough and eventually gives in. Trapped and having just watched his brother melt into slime, Finn almost gives up as well. Fortunately, he was saved by LSP, who isn’t assimilating at all. She grabs Finn and pulls him along as Slime Princess’s body ejects them.

As they walk back to the skyhooks to meet back up with Simon and Betty, LSP reveals that she isn’t slime-ified at all– she just disguised herself to blend in and join the awesome party. But even so, she still didn’t fit in and bemoans that maybe she can’t fit in anywhere.

Finn mumbles that Jake could fit in everywhere and always believed that things would work out. (But where was Jake now? Lost himself to the slime because he blended in way too well…)

So far, each of Adventure Time’s Elements seem to be associated to certain traits: Candy is happiness and childlike sweetness, while Ice is sadness and resignation to emptiness. The theme in “Slime Central” seems to be about popularity and the pressure to fit in. Like how Finn had to literally douse himself with slime to look like the others, or the metaphor of resisting assimilation by believing in yourself. There’s also the lukewarm response to Jake when he did something different and uniquely him, and how LSP still gets rejected for being herself despite all her efforts to belong.

This makes me wonder what kind of associated traits the Fire Element has. Passion for life? Destructive anger? Or perhaps love? Does that mean we’ll see Flame Princess? Well, with the next episode titled “Happy Warrior”, there’s definitely something to look forward to.

What did you think of “Slime Central”? Share your thoughts int he comments section below!

Previous:Boruto: Naruto Next Generations 1×4 Review: A Ninjutsu Battle of the Sexes