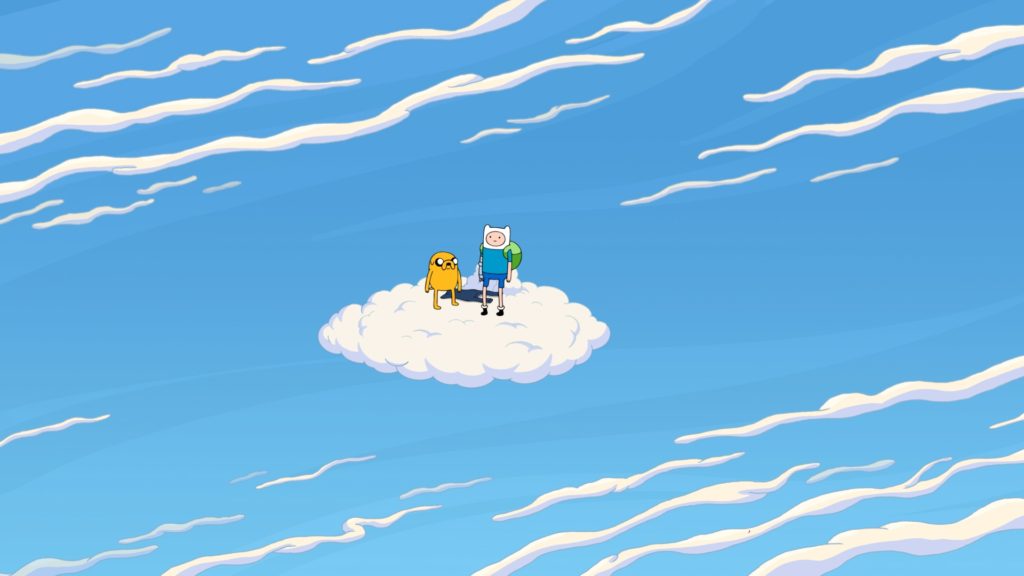 After their escape from the Ice Kingdom (as much as it can be called an ‘escape’, since Patience was basically went, ‘kay do whatever you want’), our heroes retreat to the Cloud Kingdom to regroup and make a plan in “Cloudy”.

Betty is the only one with both the magical know-how and presence of mind to begin figuring out how to reverse the situation, but unfortunately, her power levels are severely drained. While Ice King and Jake have no problems taking a little break, this leaves Finn on the verge of panic. His anxiety is very relatable, what with him pacing back and forth and repeating the same things over and over again (And apologizing for it, but not being able to stop himself). Jake goes into brother mode and encourages him to take a nap, but when their patch of cloud floats off into the sky, the pair find themselves stranded with no idea how to get back to the others.

This does absolutely nothing to soothe the already frazzled Finn, especially when Jake is as distracted as he always is from the job at hand. Ultimately, however, it proves to be a very needed break, with the two getting some alone time to wrestle, role-play, and do some good ol’ fashioned adventuring.

It was really nice to just get to see Finn and Jake talking things out as brothers. They’ve been through a lot over the last few… months (?), and just as soon as they thought they’d get to relax, they found their whole home transformed. Finn gets really honest about his feelings regarding the whole situation — is he secretly relieved, since it ‘proves’ his superiority over Fern? Guilty, because he effectively left Ooo undefended? (And man, it is hard to be reminded what a weight Finn has effectively placed on his own shoulders.)

Perhaps more surprisingly was the chance for Jake to open up. The guy’s entire thing is acting perpetually chill, never letting anything get to him. Here it raises the question of how much of that is him putting on a brave face for his brother. Probably not that much, admittedly — but Jake still admits that he’s terrified that La 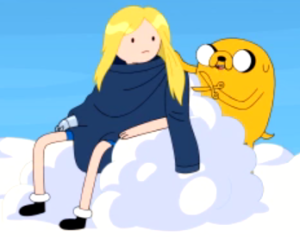 dy Rainicorn and their children have been zombified, and that there may be no way to save them.

Eventually, the two lighten the mood with a song. And as far as songs go, it’s really not very good. The meter is weird, the lyrics don’t really fit it or rhyme… but that’s the point. It’s a song the two improvised, on the go, together. It’s not meant to be a polished, perfected work of art. It’s something they created to help them feel better in the face of a terrible situation.

Despite getting kind of heavy, overall, this episode is pretty light and airy, offering a bit of a breather from the otherwise heavy stretch of these two miniseries. There are some awesome humor and jokes.  Probably my absolute favourite was Betty getting defensive over knowing how to study, since she was a graduate student, and Finn’s response of, “How does that work? You’ve graduated but you’re still a student?” Finn and Jake got a chance to just hang out as bros; pretending to cut each others hair, wrangling a monster, and making the audience consider things about Jake’s anatomy that we never, ever wanted to. And that’s exactly what they needed.