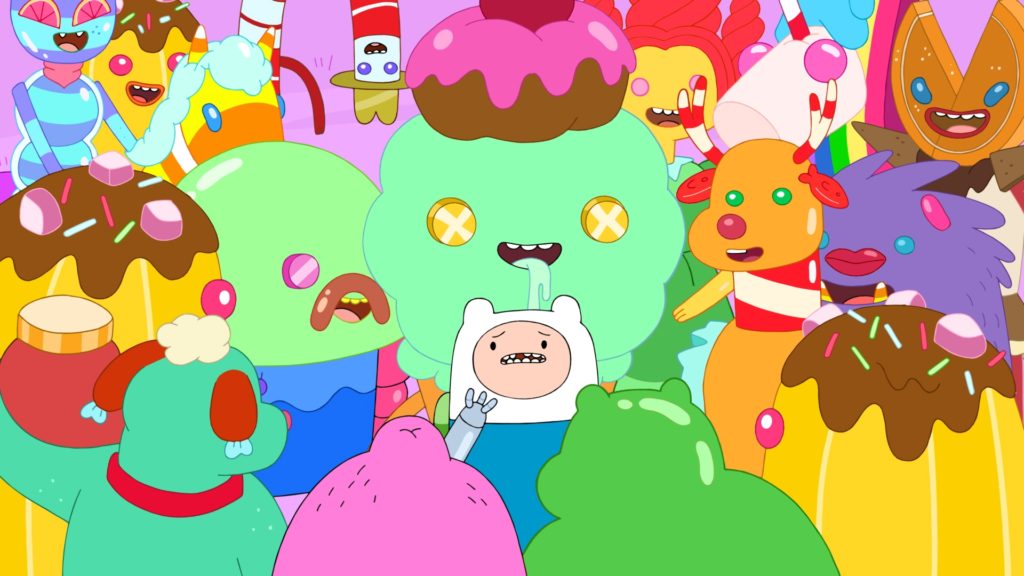 Where we left off, Betty decided to go AWOL, leaving Finn to be zombified by the candy people, while absconding on the magic carpet with Ice King and the elemental jewels. What’s her real plan, and how will Ooo be restored? It’s time for Elements to come to a close in “Skyhooks II”.

Ice King is pretty distressed about abandoning Finn, and it really does put into relief how much he’s developed since the early days of seasons one and two. Back then, he cared about nothing but kidnapping princesses in a vague attempt to restore his lost love. Now Betty is the kidnapper with that exact same aim. Her intent: create a portal to the past, prevent Simon from ever putting on the crown, and rewrite the timeline entirely.

Betty’s actions here are really interesting to analyze, because we find ourselves wondering — how much of this is Betty’s “true” personality? If she had never been overcome by Magic Man’s powers (and by extension, his ‘madness and sadness’), would she have been driven to the lengths she was here? And ultimately, does it even matter? At this point, that is a fundamental part of her personality, as essential to her as Ice King now is to Simon. 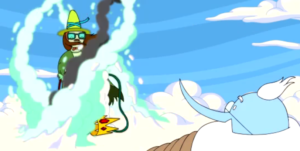 Which seems to be the point. “This Simon guy sounds cool, but I’m Ice King.” Betty could have changed the past, but how many beings would she have erased from existence out of her selfish desire to have Simon back? And judging by the fearful looks that Prismo and Cosmic Owl exchanged, tampering with such a fundamental figure in Ooo’s history could have had terrible consequences — let’s not forget how Farmworld turned out. Ultimately, she’s taken to stand judgement in front of her predecessor, the ex-Magic Man, and we can’t help but wonder what punishment is in store for her.

Thankfully, the key to saving Ooo from the elemental chaos was never Betty, but someone else entirely — Lumpy Space Princess.

The reason LSP is resistant to the elemental transformations, is turns out, is because she is made of the fifth element, lumps — the ‘lattice of the elements’, the glue that holds all these different forces together. She’s effectively the ‘spirit’ equivalent in this ridiculous made-up system.

It took a little while for me to figure out how this works thematically — but weirdly enough, it does work. Each of the elements corresponds to an emotion or state of mind, and each of them being something necessary for a healthy personality. Candy: innocent happiness. Ice: sadness. Slime: recklessness and conformity. Fire: anger. However, we also have to repress these emotions and keep them in check to be able to function.

But LSP never represses anything. She feels what she wants to feel, always, and makes sure everyone knows it.

Or, as she so summarily put it,  “People don’t tell me what to do, I tell them what to do.”

The force of her lumpiness allows her to revert all of Ooo to the way it is meant to be. Fire Princess, Marceline, PB and the Candy Kingdom gather around her to thank them for saving them, and she slumps to the ground exhausted, knowing she’s a hero.

For all that so much was wrapped up, Adventure Time still leaves a few loose threads and questions to be answered. In the end, Patience St. Pym noped out. Gotta wonder: does this mark her true exit from the show? It’s very in-character, and having ancient evils waiting to be unleashed is a hallmark of this world, but I kind of hope we get a little more resolution to her. Just a chance for her to acknowledge the harm she did and maybe have a chance of showing she learned her lesson. Meanwhile, Sweetpea regrew his second horn, which may be innocent, or may be an omen of things to come. One of ice jewels fell out of its crown before Ice King hastily shoved it back in, which may have repercussions for him. And of course: Jake returned from slime assimilation in the monstrous form of his shape-shifting, biological mother.

It’s more than a little unsettling to behold, and even Finn is uncomfortable at first sight. But in the end, it doesn’t matter what Jake looks like. Finn embraces him, knowing that whatever else, they’re best brothers.