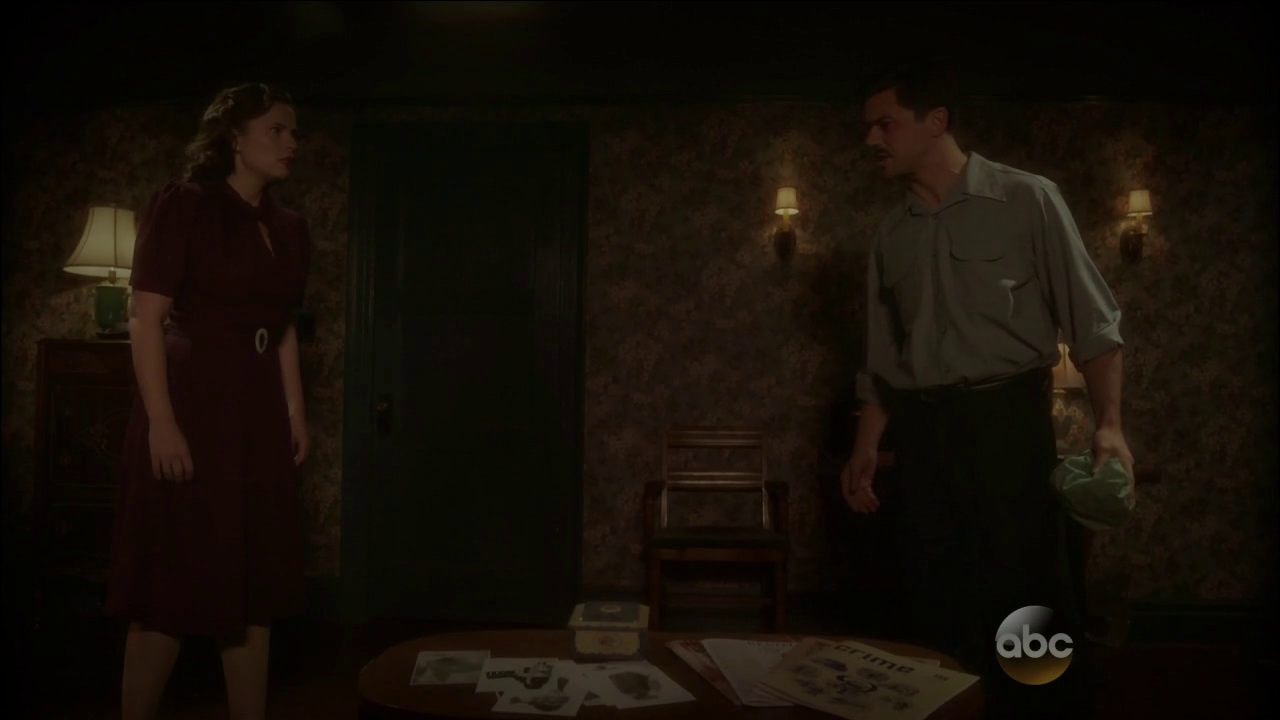 It’s a testament to how enjoyable this show is, that an episode that is essentially just people standing around talking about their feelings is still surprisingly entertaining. Not that I don’t enjoy a good old chat about feelings, especially when those feelings involve Steve Rogers. And to be honest I could probably watch a whole 22 episodes of Peggy Carter and Howard Stark butting heads and bantering. It’s just the thriller/action concept doesn’t generally lend itself to in depth emotional discussion, but Marvel’s Agent Carter does it so well that it works.

This week on Marvel’s Agent Carter, Howard Stark smuggled himself back into the United States under the guise of getting back his baddest baby. This leads to Howard staying with Peggy, which leads to a clash of personalities and ultimately a big break up over the ideals that Steve Rogers embodied. Meanwhile Chief Doodle Dooley racked up some frequent flyer points with a trip to Germany leaving his blonde babe, I mean Agent Thompson, in charge of the troops back home. Also resident nice-guy Agent Sousa has a lot of issues with his disability, but he’s not the only one that was affected by the war but he might be the only one that wants to talk about his feelings.

As I said, this episode had a lot of talking, fortunately what they were talking about was intriguing as all hell. The rift in values between Howard and Peggy has been brewing since the series began and poor Jarvis is caught in the middle. Hayley Atwell and Dominic Cooper have such fantastic chemistry that it’s a joy to watch both their humorous bickering and their tragically heartbreaking argument. I was worried that Howard Stark would get annoying if he was used too much, but his presence worked in this episode. It worked to push the Peggy’s loss to the forefront and it worked to force her to confront her recent morally ambiguous actions.

Probably the most interesting thing to happen in this week’s episode was the hints at the Red Room. For those of you that don’t know, The Red Room is a Russian (or I guess Soviet) facility that is most famous for training none other than everyone’s favorite Avenger Black Widow (if Black Widow is not your fave then you should re-evaluate until she is). It involves brainwashing and all kinds of bad things, it’s generally not a good place, which means it’s generally not a good thing that Peggy’s new neighbor Dottie Underwood appears to have been trained there. Well it’s not good for Peggy, but it is great for the audience because it means that a Marvel’s Agent Carter is even more intrenched in the greater MCU than before, and it means we get to explore a seriously cool storyline. 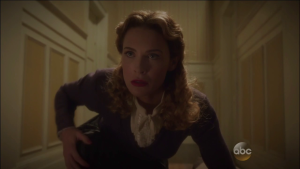 The best thing though was the way they revealed the Black Widow connection – and I’m not talking about any confirmation interviews that came after the episode aired. Marvel’s Agent Carter made the connection to the Red Room not in one of the many conversations that took place throughout this episode but instead through the physicality of Bridget Regan’s performance. She fought exactly like Black Widow and it was beautiful. This show is seriously brilliant sometimes. In fact it’s seriously brilliant most of the time (with the exception of its seeming determination to ignore post-WWII racial tensions), and I honestly don’t understand why more people aren’t watching?

Who are the people that are not watching this show? Seriously. I hate to sound like a sales person because I am committed to interrogating what Marvel’s Agent Carter gets wrong as much as what it gets right but this show is brilliant. You are doing a disservice to your friends, family, co-workers and acquaintances by not convincing them to watch Marvel’s Agent Carter. It’s got espionage, action and intrigue. It’s exciting and funny and entertaining as hell. The cast has so much chemistry that something is bound to blow up sooner or later. And it not only presents an interesting interrogation of post-WWII gender politics but also the numerous ways the war effected those that lived through. Marvel’s Agent Carter is a brilliant period piece, a great comic adaptation and a fantastic thriller.

Your mission is to make everyone watch Marvel’s Agent Carter or Peggy will staple your face.

Previous:Looking forward to Rave of Thrones: An Interview with Kristian Nairn
Next: Helix 2×3 Review: Scion