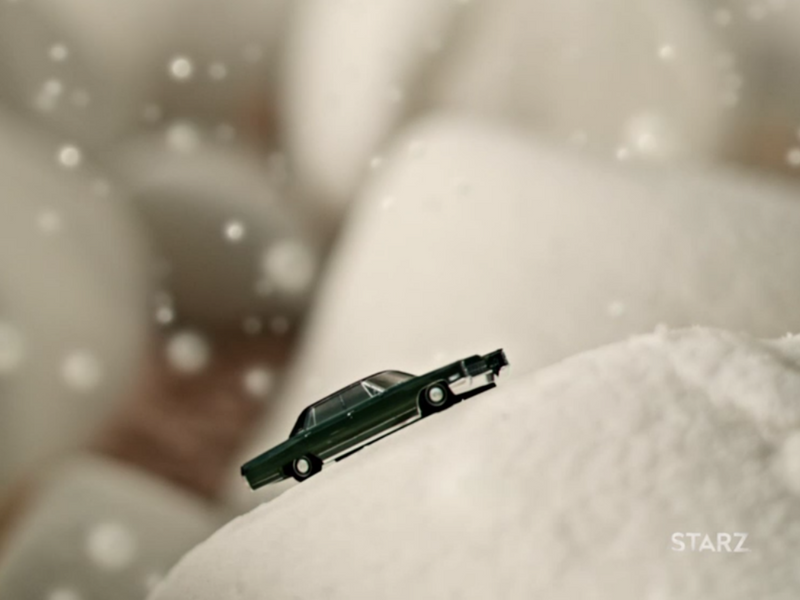 The glorious thing about American Gods as a TV series is the space Bryan Fuller has to expand on some really good parts that flash by in the book. “Head Full of Snow” treats us to extended versions of some fan favorite scenes while moving Shadow’s story along.

“Head Full of Snow” opens with a story of the gods in America. This story is a little different – instead of a god’s journey to America, we see how one serves the faithful here. Mr. Jacquel (played by Chris Obi) is just what a god of Death should be: gentle, powerful, a little scary but with humor around the edges.

The dreamy sequence where he guides the Muslim woman to the afterlife was created just for this show. I found myself holding my breath when Mr. Jacquel (we all know he’s American Anubis, right?) weighed her heart. Neil Gaiman talked about those with heavy hearts being devoured by Ammit, and I had a fear for this woman who meets Death with such style. Luckily for all of us, she passes the test and is allowed to choose a reward world.

By “allowed to choose” of course I mean her cat tripped her into an open door. Cats are like that. It’ll probably work out well.

Back in the central story, it might seem like Shadow’s last hours to those who haven’t read Gaiman’s novel. He’s sleeping in the Chicago apartment, dreaming of climbing the fire escape to the roof. There, the third sister who everyone was trying not to wake earlier is watching the sky. Zorya Polunochnaya gives Shadow his first semi-straight answers by telling him what she and her sisters are doing (watching a demon who’s chained up in the Big Dipper). She also trades him her first kiss for the moon. Seriously, she lets him pull it from the sky into a silver dollar. Zorya Polunochnaya warns him to keep it close, since he already lost the better protection he’d had earlier.

What protection is that? Remember the gold coin Shadow got from Mad Sweeney? It will surprise no one that the coin Shadow threw on his wife’s grave was more than normal gold. Without it Mad Sweeney is having the worst luck imaginable. He won’t get it back, either, as we see at the end of the episode.

Before we get there, though, we have to talk about two wonderful things. 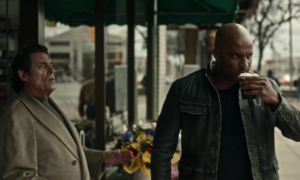 This is the most resentful cocoa drinking ever. Ricky Whittle is perfection.

First, the snowy bank robbery. I love this face of Mr. Wednesday in the book: the consummate con artist, always having the right words to get his way and three steps ahead of everyone else. His plan is such a simple one that you can’t quite believe it would work – but it did, beautifully. Shadow’s handling of the police officer was as smooth as it was in the book. I have to admit though, I did like how Gaiman had Shadow ask if “Jimmy Gorman” was drinking again and basically force the cop to defend Mr Wednesday. It would have been cool to see it here, too, but that’s a tiny quibble. 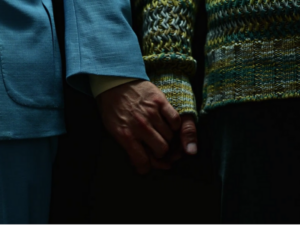 Though this is chaste compared to what happens next, it’s such a hopeful gesture that it makes the full scene more tender than it might be.

A friend of mine who watched with his boyfriend summed it up perfectly: “What? I get sex scenes on normal TV? This must be what it’s like to be a straight dude.” I might argue about the “normal” part (American Gods is definitely not normal) but he’s not wrong. The Djinn might not grant wishes, but Fuller and Gaiman certainly do. Kudos to the whole crew for continuing to hit it out of the park as far as representation goes!

“Head Full of Snow” wraps up with Mad Sweeney following Shadow’s directions to find his coin. He digs Laura’s grave up frantically, trying to avoid the looming death that’s been hanging over his head since he lost the sun coin. Of course he doesn’t find it. Mad Sweeney only finds a hole where the coin burned through Laura’s casket.

Knowing from the book what comes next, I cannot wait. Emily Browning has said in interviews that Episode 4 was the piece given to her to explain Laura’s character, and she signed on based on the strength of it. It will be interesting to see Ricky Whittle and Emily Browning play off each other in their first major scene together.

Did you see “Head Full of Snow”? What did you think? Share your thoughts in the comment section below!