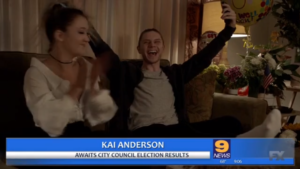 We did it, hurray!

In ‘Valerie Solanas Died For Your Sins: Scumbag’, Ryan Murphy once again tries to show that, no matter what side you are on, radicalization leads to death and destruction. However, having to craft stories for one side leads to a tone-deaf and flat delivery.

“Valerie Solanas Died For Your Sins: Scumbag” opens with the attempted murder of Andy Warhol by the title’s named character, Valerie Solanas. Valerie is played by Lena Dunham, whose delivery and acting of the character while flat at first, evolve into one of the best characters this episode.

Opening the episode like this seems disconnected at first since immediately after the show goes back to current events. Meadow is shown on film as the shooter and Ally is in custody. Harrison is talking to the news and stating that Meadow committed the shooting because she was upset that Trump won. According to Harrison, Meadow wanted to take out her rage on his supporters, especially Kai. This creates the martyrdom Kai needs and he wins the election by over 20 points.

Contrasting this with the obvious radical ‘left wing’ violence of the attempted murder of Andy Warhol is Ryan Murphy once again trying to show how both sides can be equally violent. However, just as the problem is in real life, actual examples are few when compared to those of more ‘right wing’ radicals. This has been a problem that has plagued the season since the beginning. Ryan Murphy has to rewrite history to include comparable acts of ‘left wing’ violence to those of the current and real threat of ‘right wing’ violence in today’s world.

Once again, Ryan Murphy shows his dialogue for feminist women tends to be too literal and dead in delivery. Beverly encounters a woman named Bebe, who proclaims she knows how staged the assassination attempt was. Bebe’s delivery of her words, knowing that Beverly is involved in a “man cult”, seems too ripped from a Reddit post making fun of feminists, a problem which also plagued the last episode’s powerful and feminist-leaning character.

Bebe’s words are emphasized when Beverly goes to talk to Kai about the experience, is denied entry to Kai’s house by a white bodyguard, and finds the house dominated by white men (many of whom are implied to be skinhead Nazis). Directly after the conversation with Bebe, this event feels staged and at ends with how Kai had been operating before.

This exclusion of women leads to Beverly gathering all the women from Kai’s cult to meet with Bebe and hear what she has to say about men, their motives, and the word of Valerie. Bebe was apparently Valerie’s girlfriend during her life and during the time she was promoting her book, SCUM Manifesto. Unlike Andy Warhol and Valerie Solanas, Bebe does not exist. There is no mention of her in the biography of Valerie or in the information about SCUM Manifesto.

SCUM Manifesto is a real book, written by Valerie Solanas, about how men rule the world, are the source of all the problems in the world, and how all men need to be killed to restore order and power to women. The acronym SCUM stands for Society for Cutting Up Men in American Horror Story but in reality, Valerie denied that the word was an acronym. Much of this episode is based on the hearsay and rumor around the manifesto as opposed to the actual story surrounding it. 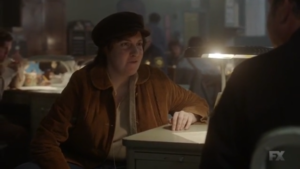 I swear to you, it was SCUM!

Another flashback shows Valerie striking up her own cult of women (and a few men) who follow the ideas in the book, mostly the idea that men need to be eliminated. In order to enact this, Valerie comes up with the idea to kill men and the women who are sleeping with them. Men must be eliminated as well as the women who they see as traitors to the cause. They wanted to show that being with men was dangerous and would result in death. These killings would later be attributed to the Zodiac Killer, who according to Bebe, was really the SCUM gang.

Lena Dunham’s role as Valerie is well done. Her acting skills are well suited for the role and her delivery of Valerie’s ideas and manifesto are filled with gusto. Originally, this was a guest star that many people were not excited to see in the show. However, this minor showing is well-done despite some of the cringe-worthy deliveries in the opening of the episode.

When Valerie goes to the cops, claiming credit for the Zodiac killings, the cops laugh and drag her away. This is the final straw for Valerie and she has a schizophrenic break, becoming more paranoid and more outlandish. She drives her followers away until even Bebe has to leave her. Leaving Bebe where she is now, trying to spread the SCUM message without her love.

Yet, this whole set-up as Valeria Solanas as a violent, cult-leading woman falls back into the problem that continues to pop up this whole season. The social commentary that radicals on both sides are just as bad as the other falls flat when you have to make up murders and violence for the one side. None of these murders being attributed to SCUM were caused by a murder cult of women set on destroying men and the patriarchy in real life. In fact, there are many radical feminists today who still consign to these ideas, such as TERFs (trans women exclusionary feminists), political lesbians, and some sections of second-wave feminism, but almost none of them actively engage in murder, let alone serial murder.

This entire section feels contrived to create a parallel that simply does not exist in reality. American Horror Story: Cult is trying to make political commentary on an area and issue that does not exist on the same grounds. While there are radical leftists who have engaged in terrorism, violence, and murder, the number and extent are far outweighed by the opposite end of the spectrum.

Even using Valerie and the SCUM Manifesto doesn’t quite seem to fit either. It almost seems like he picked a random point in time that coincided with a well-known unsolved serial killing and went with it. Sure, the SCUM Manifesto talks about murdering all men, but during that time no violence actually came from it. Valerie was also a confirmed and diagnosed schizophrenic and this season seems to love to paint mentally ill people as violent (as opposed to the victims of violence). Attributing multiple murders to her only seems to further this stereotype. The whole section seems for Ryan Murphy to construct an argument that both sides are bad in order to try and further the political end of the show. It feels out of place and simply out of touch.

After the telling, the women of Kai’s cult decide to turn against him. Kai is obviously aware of this as the next scene shows Kai confronting Winter about the SCUM Manifesto he found under her bed. Surprisingly, Kai likes the idea of having a manifesto and a solid cause like Valerie did. He even mentions two acronyms: Fear Is Truth (FIT) and MLWB (Men Lead, Women Bleed). According to Kai, the later was suggested by Harrison. This is obviously a trap to get Winter and the gang to out themselves as traitors to the cult. Winter falls right into his trap. 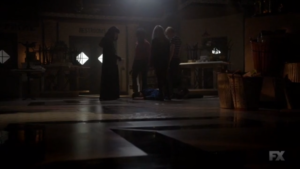 Well, this was obviously going to happen.

The ending of the episode ends with a twist, showing Kai and Bebe talking. They are obviously working together and this would be more of a shock if the entire show hasn’t already set-up that everyone is working for Kai. Literally, everyone from Ivy, the psychiatrist, the neighbors, and the cops have all be revealed to be working with Kai. Honestly, this is something I did not originally catch myself and it was less of a gasping surprise moment and more of a kicking myself moment. Not being able to spot a twist feels less like a surprise and more of a flat moment where viewers may be more upset with themselves for not seeing the obvious. This moment is also meant to show how the radical left and the radical right are ultimately the same, which as brought up before, they are not.

Showing that Bebe is working with Kai also brings into question everything that Bebe brought up to the women of the group. Since Bebe did not exist, is this story she told them, entirely fictional in the world of American Horror Story: Cult as well as in real life? This is probably the only well-done thing about the reveal.

Ultimately, the episode that tried to bring everything full circle falls short of its intended goal. “Valerie Solanas Died for Your Sins: Scumbag” fails to deliver on the political messages of the show due to having to rewrite history in order to do so.

Previous:Lead Of The CW’s “Chilling Adventures of Sabrina” May Not Be White!
Next: Mr Robot 03×02 Review: undo.gz