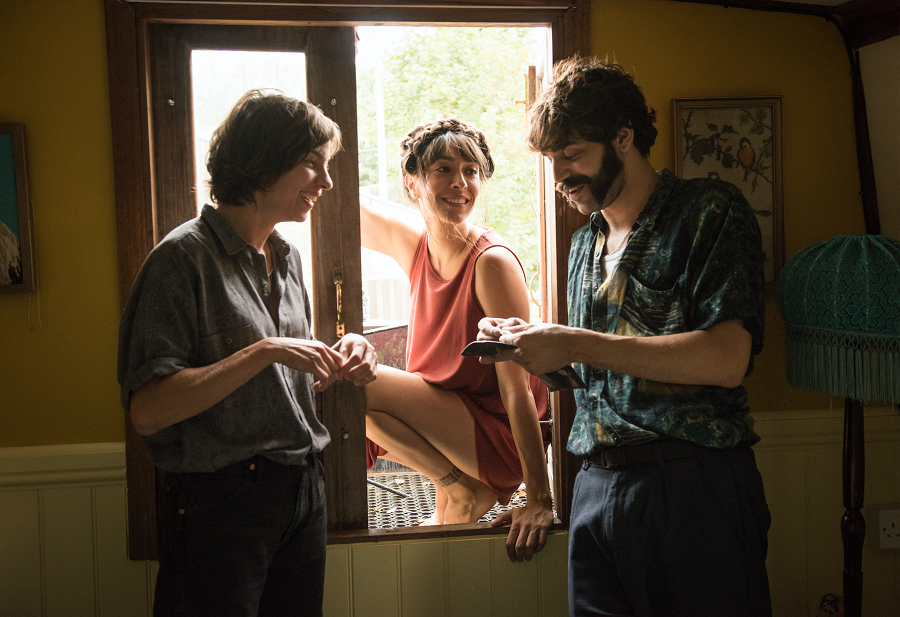 Kat, Eva, and Roger in Anchor and Hope (Image: PR)

Anchor and Hope is a very enjoyable film centering around a lesbian couple (living on a houseboat) deciding to have a baby and all the troubles that arise.

I was provided a free screener of Anchor and Hope for review. The opinions are my own.

One of the things I greatly appreciated in Anchor and Hope is how real the characters felt. The film is by director Carlos Marques-Marcet who co-wrote it with Jules Nurrish. It stars Oona Chaplin (the granddaughter of Charlie Chaplin) as Eva, Natalia Tena as Kat, David Verdaguer as Roger, and Geraldine Chaplin as Eva’s mother Germaine. The story follows Eva, Kat, and Roger as they try to navigate the complexities of having a child in a modern family.

In their mid-30s, Eva (Oona Chaplin) and Kat (Natalia Tena) have a fun and carefree simple life in their London canal boat until Eva, inspired by her exceptional mother Germaine (played by her real mother Geraldine Chaplin), presents Kat with an ultimatum: she wants a child. Kat resists, knowing that it will end the bohemian lifestyle that she’s always envisioned with Eva. When Kat’s best friend, Roger (David Verdaguer), drops in from Barcelona, the three of them toy around with the idea of creating a baby together. Kat sees no other way out but to say yes.

As the three begin to look forward as one family, their differing expectations of intimacy and responsibility put a heavy strain on their relationship and threatens to rip the three apart.

Eva and Kat have a very loving relationship. However, Eva wants a baby and Kat isn’t completely onboard. You can tell Kat is only willing to give Eva what she wants because Kat doesn’t want their relationship to end. Now, many say you should talk about whether or not you want children before deciding to be with someone in the long run. While having such a talk at the beginning is a good thing, it doesn’t do away with how people can change with time.

Your partner might end up wanting kids as they grow older even if you don’t want to become a parent. Similarly, when you are with a partner who isn’t interested in babies, you might think you will be able to change their mind in a couple of years. Anchor and Hope shows how complex it can be for couples.

Each character has their own goals in life and while Roger and Kat come across as sensitive beings (contrary to their outward appearances) it is sweet-looking Eva who is the toughest of the three. Eva will do what is required to gain what she wants and I have to say while she made decisions I didn’t like I still understood where she was coming from.

Anchor and Hope shows how everyone can be selfish in their own way. The narrative doesn’t paint a single character as the villain. All of them are doing what they think is right to be happy and that helped to make the narrative look real.

As for the direction, Kat and Eva’s houseboat served as a very confined space, separate from the outside world around them. It demonstrated how their tiny bubble (the houseboat in this instance) can easily pop when they think of something different to be a part of their lives. The director also makes use of a lot of lingering shots to help the audience understand what characters are going through without them saying a word.

If you are looking for a queer movie with fleshed out female characters and an interesting touch of dramedy, you should check out Anchor and Hope.

The L.A theatrical release of Anchor and Hope is by Wolfe Releasing. The film will be available on Digital, VOD, and DVD on November 20, 2018.