Anthony E. Williams Introduces Us to His F.A.M. #AFBB 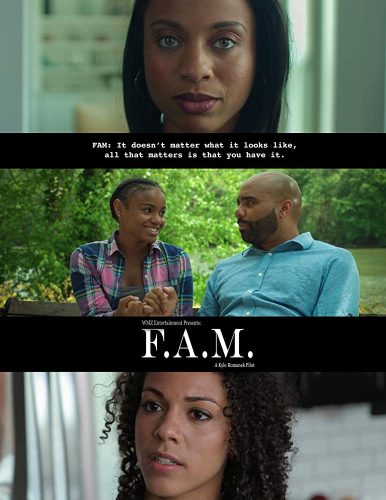 F.A.M. tells the story of a family that is constantly redefining itself and teaches us that it doesn’t matter what family looks like, all that matters is you have it.

We open on a car ride in Atlanta, GA where two young men brazenly discuss the woman in the backseat. The driver’s commitment to her is less than secure as he openly talks about the “options” he has. Of course, she’s awake and when they stop for gas, she uses this opportunity to seek vengeance. What starts as her flirting with a man to get a rise out of her boyfriend, ends with her punching said boyfriend in the face. We fast-forward 15 years and see that the young woman and man are no longer together, but now have a child that makes them F.A.M.

Our blended family stars Anthony E. Williams as Trey along with the three strong women that define his world. His daughter Olivia (Acacia Leigh), his wife Dara (Candace West), and his Ex, Traci (Breana Cymone). Rounding out the script is Trey’s best friend, Chris (Moses Jones).

It’s very clear from the opening and throughout the episode that Traci has an old score to settle with Trey. Whether she’s still in love with him, or is just messing with him to prove that she can, Traci inserts herself into Trey’s life in areas outside of their daughter. Dara is trying to make a connection with Olivia that’s not negatively influenced by Traci while still being a good wife to Trey. And Chis… well, Chris is just trying to keep the peace.

The F.A.M. pilot screened at the American Black Film Festival this week as part of the web series category and Anthony E. Williams is currently shopping the project. I had the opportunity to speak with him about the show and about his plans for continuing the series.

The Geekiary: Why did you decide to create a series?

Anthony E. Williams (WMZ): I’m an actor first, and in Atlanta, I kept going in for roles like “Thug #3”. I have an MBA, and I was like, there’ve got to be roles for a Black guy with an MBA! And not just playing a thug or selling drugs. I wasn’t seeing a lot of roles that were a good fit, so instead of complaining about it, I decided to do something about it.

Williams went on to explain that he took a lot of the show from his personal life. I’d mentioned earlier how excited I was by the strong and well developed female characters and he explained his intentions behind his producing their characters and removing the stigma of “baby mama”.

AEW: It’s easy to make characters like “the baby mama”, but I fought against that. In corporate America, I would see a lot of Caucasian executives who had ex-wives or children outside of their current marriage saying things like “I have the kids this weekend”. The meeting would go on and there wouldn’t be any jokes. It wouldn’t be “ghetto” or negative, it’s just a fact of life. And I thought, wait a minute, why do I have a cloud over my family dynamic because I’m a black man? I started to really open my eyes to television and how we depict our family structure compared to the White shows.

Williams set out to do something as high quality as he could afford that showed a Black man and his family in a dramatic setting. He wanted it to be grounded with heart and be relatable to families in similar situations.

Although Trey serves as the head of the family, the story really revolves around Olivia, his 15-year-old daughter. Olivia is not a perfect kid and that’s what makes her a perfect character. She is a sponge for both her mom and her dad (and Dara) and they clearly shape the way she discovers the world around her. Additionally, they act as support as she tries to figure out her place in the world.

In one scene she can be seen trading barbs with Dara, but in the next scene, she confesses to her father that she’s warming up to Dara and that a lot of her condescending comes from trying to protect her mother. She’s a child on the cusp of being an adult and Acacia plays her beautifully. Another element I appreciated was the infusion of LGBT+ themes without any heavy-handed angst. Olivia has a frank conversation with her dad about her status in the family if she were queer and Trey assures her with lots of heart and humor that he and the family will always love her no matter what.

TG: Tell me more about what inspired that scene and what the feeling on set was.

AEW: It was a very emotional day on set. That scene really meant a lot to everyone. When I was a kid I remember overhearing something about “gays”. I asked my dad if I was gay would he disown me and he said, “no, I’d just diss you!”. He was a jokester, but I thought to myself, if I really was gay, that would be the wrong answer! So I made up my mind that if my kid came out to me, I would have a different approach.

TG: The approach on-screen loses none of the humor, but adds heart and understanding.

AEW: I’ve spoken to friends about their coming out experiences and they hold on to that first conversation for the rest of their lives. I wanted to kind of give an example to parents for when they’re having the conversation with their kids that, hey, it doesn’t matter how you feel, you need to be understanding and empathetic. 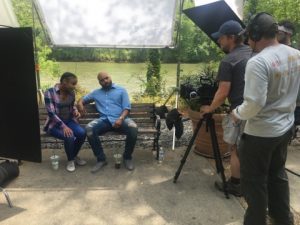 TG: Seeing the father be so open and allowing the kid to feel comfortable asking and figuring out themselves was great to see, but especially in a Black family.

AEW: Right. One of the frustrations I have with being a filmmaker or writer and reviewing other shows is that the LGBT+ plot ends up being 100% of the show.

Williams argued that it wasn’t realistic and not entirely palatable with a straight audience. With the kind of drama he was creating, the LGBT+ element was going to be one important piece of a whole pie and he wanted to be able to spoon-feed it to the audience. He wanted it to be part of the meal, but not overwhelming. Due to this, the scenes in F.A.M. come off very natural and real.

F.A.M. is shot beautifully and is currently being shopped to different services. You can watch the pilot on ABFFPlay this week.

We’d love to hear from you!

Previous:“Ben 10 vs The Universe: The Movie” Releasing This October!