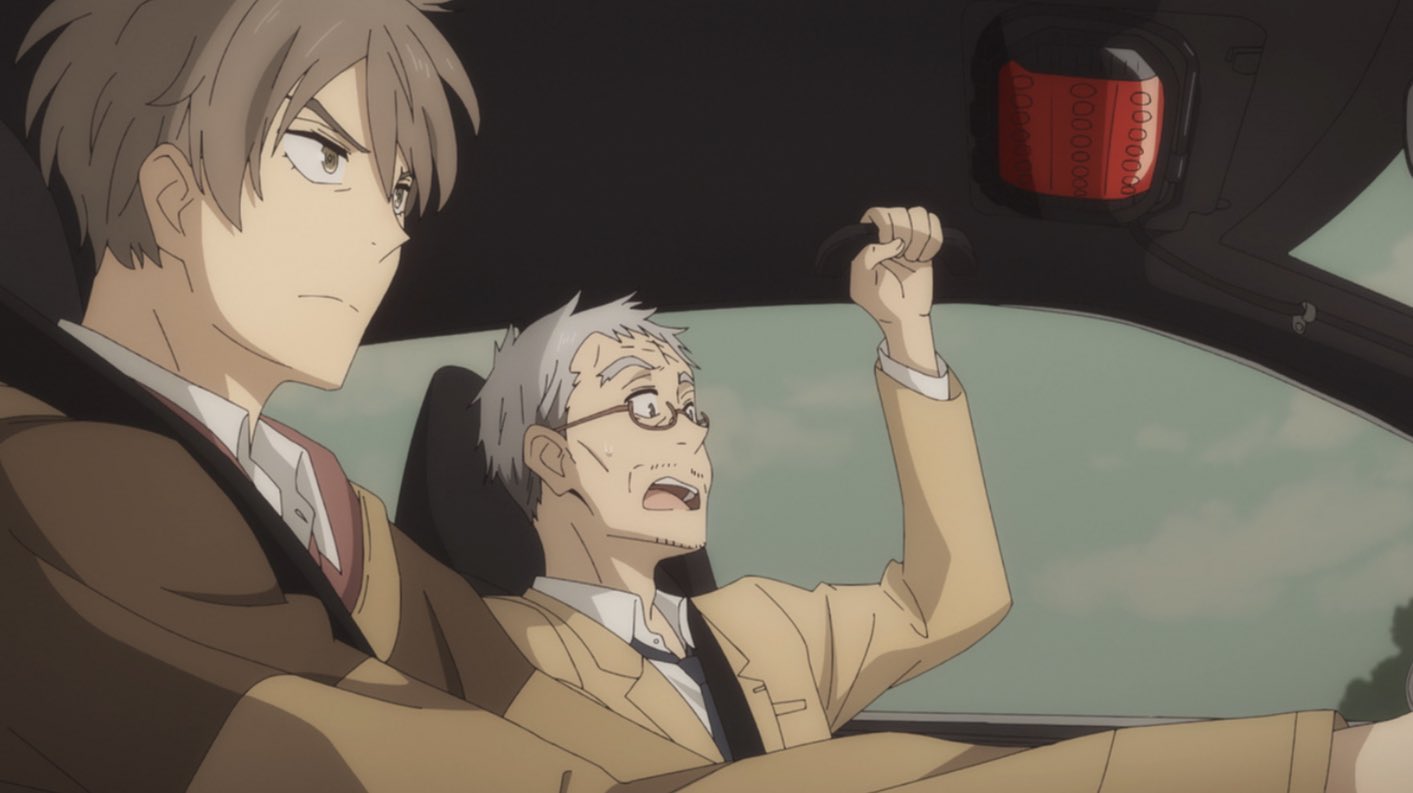 ‘Money Is The Root Of All Evil’ is an emotional gut punch that left me wanting to give Daisuke a big comforting hug.

We didn’t linger on the question of whether Daisuke was responsible for Imura’s murder for too long.  ‘Money Is The Root Of All Evil’ cleared his name for both us as viewers as well as the characters in the show itself.  We know he’s not the murderer because he, too, is investigating the missing surveillance footage.  And the characters now know that too because of the whole ordeal with Takei at the end of the episode.  Our boy is free from these terrible accusations, thank goodness!

A large portion of the episode relies on flashbacks of Cho-san and Takei investigating the murder of Kambe Sayuri, who we now know is Daisuke’s mother.  She was the wife of the Kambe family heir, Shigemura, who we can assume at this point is Daisuke’s father.  There is a strange avoidance of referring to this character as Daisuke’s father, however, so we may get thrown a curve ball.

Still, at this point I’m going to just assume Daisuke’s father is the prime suspect and likely murderer of Daisuke’s mother.  Those are the facts that have been presented thus far and, while I love reading into things so far, this is tragic enough for the moment and I’m just going to go with it.  If we are thrown a curve ball, however, I reserve the right to shout ‘CALLED IT!’ when it happens.

But honestly, don’t you also want to give Daisuke a hug right now?  Not only was his mother murdered, but his father is the likely suspect. And then his father killed himself, leaving Daisuke an orphan.  Someone hug him! Haru, please hug your billionaire.  He needs it.

The investigation into Sayuri’s murder got Cho-san and Kiyomizu demoted to the Modern Crimes Division, much like what happened to Haru in our current timeline when he had the incident with his gun.  The cover-up is clearly being protected by important people in law enforcement and they were getting too close to uncovering it.  Might as well stick them in the basement far away from any real power.  Cho-san continued to investigate even with the demotion, but he clearly hit a wall due to the lack of resources.

Takei, however, continued to move up the ranks partially from his willingness to ignore a potential cover-up and partially from his marriage to the director’s daughter.  I don’t necessarily think Takei is a bad guy – he didn’t orchestrate the cover-up, after all – but he’s certainly more career-focused than justice-focused.  He’s a victim of ambition and has a lack of desire to pursue justice, but he’s not an evil mastermind.  He definitely lacks a backbone, though, and I don’t really have any respect for him as a person.

Cho-san and Haru, however, I have immense respect for.  As I mentioned before, I truly think they are cut from the same cloth, even if Haru doesn’t understand why Cho-san goes so far in the pursuit of the truth in this specific case.  ‘Money Is The Root Of All Evil’ sees them paired up again as they charge forward towards the answers in the Sayuri Kambe murder case. 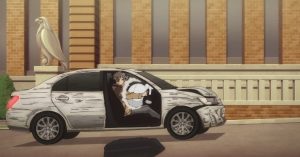 And boy, do they charge forward! Haru slams through the Kambe estate gate, completely demolishing his car.  For once I think Haru was actually willing to go further than Cho-san, who seemed rather alarmed at this sudden turn of events.  He holds on for dear life as Haru demolishes the car and pushes through the front gates of the Kambe mansion.

Moments like this are what make this show so special.  There’s a light humor laced through the deep character development and incredibly tragic plot that keeps things balanced.  The show isn’t too dark or too light –  it’s just right.

When they confront Daisuke at the entrance of the mansion after this rather humorous scene, we dive back into the deep character development aspect of the show.  Haru shouts, “You believe everything can be solved with money, and you don’t care about other people’s feelings.  But you don’t willingly commit any crimes either.”

Haru knows Daisuke is good at heart.  Even when Daisuke confessed to hijacking Imura’s car, he seemed shocked but still refused to believe that he was a murderer.  Daisuke’s methods bother him immensely – that much is clear.  But there’s an obvious trust between them that hasn’t been shaken despite everything that’s happened over the past couple episodes.

Yes, I absolutely have shipper goggles on, but even if they’re removed and I’m looking at it objectively, Haru trusts him and refuses to believe the worst.  That much is canon with or without shipper goggles.

By the end of the episode, we have answers to many lingering questions, but a whole new stack of questions to chase after.  Director Saeki is somehow involved in the cover-up.  Daisuke’s name is cleared. The reason Daisuke chose Modern Crimes over First Division is obvious.

I will continue to review Fugou Keiji Balance: Unlimited weekly, so stay tuned as we unravel the mysteries of Sayuri’s murder and the Kambe Group’s secrets together.  I’ve been hooked on this show since the first episode and it keeps proving over and over again that it’s worth every moment.

As a side note, Fugou Keiji‘s popularity continues to become more apparent through merchandise.  Spoon 2Di has a second cover that’s almost as shippy as its first one.  As I’m currently living under lockdown and all the places near me that sell this are closed for the long haul, I’ll have to seriously consider if I want to pay the shipping costs to get this magazine to my house or not.  It’s mighty tempting!  Spoon 2Di is keeping the fandom well fed! 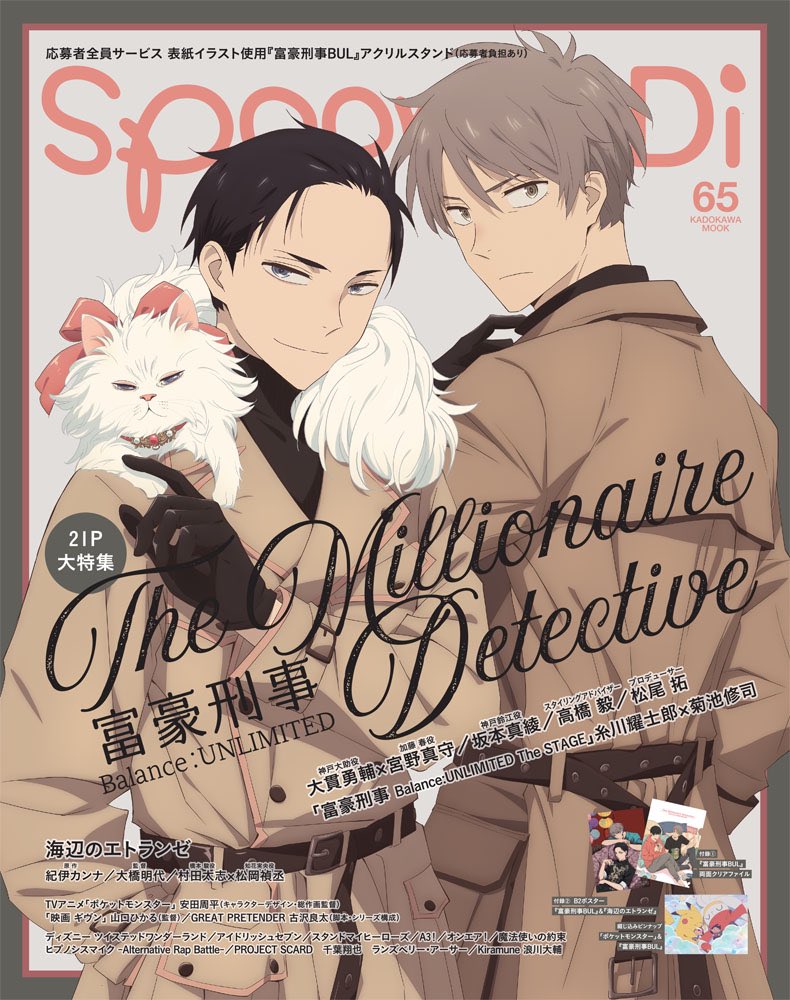 3 thoughts on “Fugou Keiji Balance: Unlimited 1×7 Review: Money Is The Root Of All Evil”