‘A Golden Key Opens Any Door’ was another tense episode of Fugou Keiji that leaves me once again asking ‘is it next Thursday yet?’

‘A Golden Key Opens Any Door’ featured a very emotionally vulnerable Kato Haru who very much needs a hug. It also featured a very badass Kambe Daisuke…. who also needs a hug. I just need them to get hugs. This is all very traumatic. I need some comfort hugging action when all this is over. 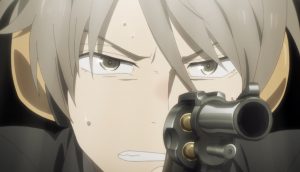 Haru once again struggled with his aversion to using a firearm. But I thought he was honestly going to pull the trigger this time because Daisuke was being hurt right in front of him. The fact that he didn’t, though, and means that inevitable trigger pull that’s coming for us will be even more dramatic.

At this point, Haru’s hesitation with firing the gun is a literal Chekhov’s gun. You don’t tease something so heavily without a big payoff in the end. I just hope the payoff isn’t Haru shooting someone on our side like Daisuke or Suzue or something. It likely won’t be, but the theories spreading around fandom have been really dramatic lately and I’m getting nervous.

I feel like when he finally pulls that trigger it’s going to be Shigemaru. Shigemaru is the main antagonist at this point and while it’d be satisfying to see Daisuke get revenge for the death of his mother, it’s possible that he’ll be unable to either because he’s being physically held back from doing so, or his emotions cause him to freeze up when he needs to pull the trigger himself.

As a side note, I do see the theories flying around that Suzue is actually on Shigemaru’s side, but I’m choosing to ignore it. I love Suzue too much to consider that. If I’m wrong, I’m wrong. But for now, I’m going to live in a happy little world where Suzue is on Team DaiHaru with the rest of us and everything is fine. Besides the fact that she seems to be holding the same knife that Shigemaru has in the opening credits, I haven’t seen any compelling evidence she’s a bad guy.

At this point, we’re seeing a far more emotional side from Daisuke than we’ve seen prior. Whereas he’s always been someone who could remain calm in even the most tense situations, we’re seeing him begin to crack and react like other people usually would when confronted with major stressors. It’s obvious that the re-emergence of Shigemaru is the trigger for this and I have to wonder just how emotional Daisuke will be when they finally confront each other face to face (I’m not counting the distance interaction that was present in this episode as ‘face to face’).

Hoshino: telling Daisuke about how Haru stopped seeming like a hero years ago after his traumas but Daisuke becoming his partner made him seem heroic again

Daisuke: Kato’s on the boat?? bye I’m off to crush men with my thighs in my sexy spy suit pic.twitter.com/3oR56uepje

I’m still emotional about thiis.. he :(( I felt like he’ll cry.. #FugouKeiji pic.twitter.com/XBUrTr5qS9 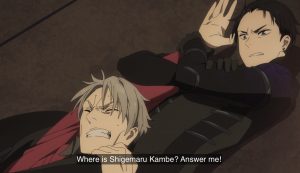 In addition to emotional Daisuke, we also get badass Daisuke. This is the first time we’ve seen him show off his physical combat skills. We knew he had these skills based on the intro of the show, but thus far he’s mostly relied on his technology and money to resolve issues.

That ship has sailed. We’ve clearly moved into a new phase of Kambe Daisuke’s life now, and with it comes raw emotion and physical badassery. I’m totally here for this. It was, to put it eloquently, hot.

Also, Daisuke’s aquatic suit was incredibly awesome. I honestly can’t get over how aesthetically pleasing both the process of putting it on and him fighting in it is to me. But honestly, most things Daisuke wears are aesthetically pleasing to me, all the way from the fancy tailored suits to Haru’s boyfriend sweater, so maybe I’m biased.

#富豪刑事spoilers
.
.
.
this scene is really too good to not share DONT WATCH IF YOU HAVENT SEEN FKBUL EP 9 YET BUT SOMEONE pls help, I can’t deal with Daisuke finally getting the badass spy entrance he deserved pic.twitter.com/2THkFGzEwr

Fingers crossed that Daisuke gets a few good hits in on Shigemaru before all this is over. If he’s not the one to ultimately take him down, I hope he at least gets some cathartic blows in before Shigemaru is ultimately eliminated.

I also want to address something I was asked about last week, and I’ve been pondering fairly frequently since then. It’s obvious that I ship Daisuke and Haru. Basically all my reviews mention it. And I usually resign myself to accept that most of my ships won’t become canon. But occasionally there’s that nagging voice in the back of my head that asks ‘what if?’ I didn’t think Yuri on Ice would do it, but it did. It happened once and it could happen again.

I don’t want to get my hopes up, though, because Yuri on Ice was an unexpected rarity. The show is presenting their relationship front and center and has numerous characters commenting on how unique it is, but that’s not a guarantee that it’ll become canonically romantic. And yes, the promotional material is definitely pushing the narrative as well (those Spoon 2Di covers are intense, man), but they could just be tapping into the intense fan reaction with their marketing.

So, sadly, no I don’t think it’s going to become canon. But I’m still enjoying the hell out of it and will proudly eat my (theoretical) shoe if I’m wrong. I would be overjoyed to be wrong. So keep those dreams alive if you’re set on it, folks, but brace yourself for all outcomes.

I look forward to next week as this week ended on quite a cliffhanger with ‘A Golden Key Opens Any Door’.

It’s going to be an incredibly long seven days and I wish life had a fast-forward button just for these moments.