‘Ill Got, Ill Spent’ throws us head first into the overarching plot of Fugou Keiji Balance: Unlimited, putting both Daisuke and Haru into vulnerable positions.

‘Ill Got, Ill Spent’ begins with Daisuke realizing he’s being locked out of important Kambe Group secrets.  It’s obviously rare that Daisuke can’t get access to something.  He either throws his money at a problem or uses HEUSC to get the information he needs.  In this situation money can’t help and HEUSC is barring him from getting the answers he’s looking for.  This puts him in a uniquely vulnerable spot, which clearly makes him uncomfortable but does not at all deter him from continuing to investigate.

At this point I’ve sort of personified HEUSC and am trying not to get mad at the little AI for not being able to help Daisuke.  It’s really not its fault.  Its just a batch of programming, after all, and someone higher up the chain than Daisuke is responsible for him not being able to give Daisuke information.  But hey, I’ve personified him so I can easily get angry at him and that’s just how it is.  Damn you, HEUSC.

Thankfully Daisuke is a better person than I am and reacts to this betrayal calmly.  He even continues to use HEUSC as much as it’ll allow him to do so.  Good job, Daisuke.  I’d have throw my earring out the window from anger and called it quits with the AI.  We have yet to really see Daisuke get angry, however.  He’s not an emotionless robot, obviously, but he manages to keep his cool and think things through instead of just reacting.

This episode also had a large focus on Detective Chosuke Nakamoto, who has generally been a background character thus far.  We know him as a senior detective in the division, but not much more.  But in ‘Ill Got, Ill Spent’ we truly see his character.  We see just how dedicated he is to the job and how similar he is to Haru when it comes to pushing through even when he gets push back. They seem to differ on just how far they can push, however, and bump heads slightly when their witness is released.

I hope he sticks around for a while and Haru continues to learn from him, even if he doesn’t always agree with how far he’ll go.  I kind of dig this dynamic.  They are similar, but subtly different.  Both are determined to solve cases and willing to go to great lengths for a resolution, but where that line ultimately falls isn’t exactly the same.  It’s fascinating.

Speaking of dynamics that I love, let’s be real, if you haven’t been able to tell from my previous reviews on the show already, I’m a DaiHaru shipper.  This episode was light on the shipper content, and that’s generally okay, though I could use that night hit of dopamine that comes with shippy moments playing out in canon.  We did, however, get one line that, when viewed through the shipper goggles that are permanently attached to my face, was quite lovely. 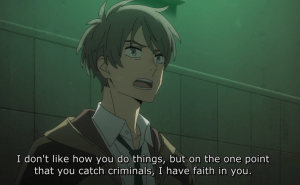 Haru tells Daisuke, “I don’t like how you do things, but on the one point that you catch criminals, I have faith in you.”  My shipper goggles have zoomed and enhanced on “I have faith in you” and given me that much needed hit of dopamine.

This was a shipping-light episode, however, and focused largely on laying the groundwork for the ongoing plot.  I appreciate how they started us off getting to know and love the characters first before throwing the plot at us.  It makes me much more invested in what’s to come.

Haru, like Daisuke, is very vulnerable this episode.  He, too, is locked out of the case, but not as pointedly as Daisuke.  He suspects there’s more going on than he’s privy to and wants in, but everywhere he turns he’s shut out and kept in the dark.  Even Daisuke chooses to cut him out.

One gap I’m noticing with this show is my general lack of knowledge about Japanese law enforcement methods.  It’s pretty clear that a lot of what Daisuke does is pretty sketchy in general, but every time I want to point out that something he does is illegal… I just don’t actually know?  I’m operating off of American laws, but I definitely shouldn’t be.  For example, when Daisuke uses HEUSC to hack into the woman’s computer and pull up evidence that… probably isn’t acceptable? I don’t know?

I am, frankly, not up on the ins and out of Japanese law.  I’ll need to train myself to shut off that portion of my brain and just enjoy it, I suppose.  Otherwise the justice-focused side of my brain is going to ruin it all.  Just enjoy the ride!

The episode ends on a dramatic note.  The woman they’ve been interrogating (with dubious legal backing) is murdered with her lawyer in the parking garage of the police station.  From that point, we get a large info dump that is clearly meant to push us in a specific direction, but I simply refuse to take the bait. 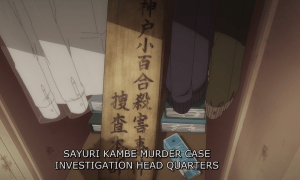 After the car explodes, Cho-san confronts Daisuke.  “You did it, didn’t you?”  We are obviously meant to assume Daisuke is responsible for the car exploding.  Then when Haru confronts the Director about why Cho-san went so far, he is shown something that reads “Sayuri Kambe Murder Case Investigation Head Quarters.”

These two moments are meant to push us in the direction of suspecting that Daisuke could possibly be responsible for the car explosion.  Perhaps it was revenge for the murder of a relative? Perhaps his motives for joining the police force were selfish, even. Maybe this was what he was after.

But no, guys, I’m not going to fall for this misdirection.  Daisuke is good.  Sarcastic, a bit arrogant at times, and dripping with wealth, yes, but good.  I refuse to believe it.  We wouldn’t have had so many tender moments with him laid out for us over the first five episodes if he was actually cold-hearted.

He clearly knows more than he’s letting on, however.  He even asks the woman about a “Shigemura Kambe,” who is another name to throw into the mix.  Something deeper is going on and he’s being shut out of it, but that would not drive him to murder.  Who are Shigemura and Sayuri, though? His parents? Intriguing.  But again, he’s not a murderer regardless of who these people are.

Also – shipper goggles on – he probably wants to discourage Haru from getting involved because he doesn’t want him getting hurt.  I don’t doubt that he trusts Haru and respects him at this point, but he also cares about him and this is dangerous.

This is getting wild, guys.  I’m extremely eager for next week!