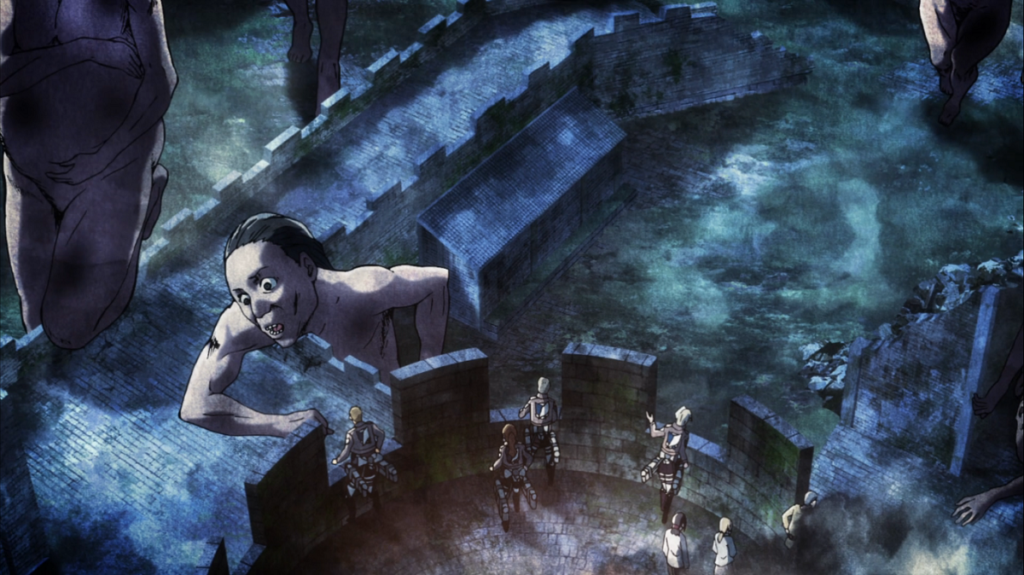 Following up on the revelation that Titans had breached Wall Rose, “Southwestward” sees the Survey Corps trying to find the hole in the wall so that they can plug it up. But it doesn’t take long to realize that something is not right.

While Levi and his squad head towards Ehrmich, Connie — along with Reiner and Bertolt — quickly realize that something is strange about his village; namely, there don’t seem to be any survivors, but there are also no bodies and no blood. Not only that, but as they leave with the rest of the squad to seek the hole in the wall through which the Titans entered, the strange Titan collapsed on Connie’s house seemingly tells him, “Welcome home”.

There are multiple hints in “Southwestward” that whatever ability that Eren and Annie possess is not unique; indeed, the lack of blood in Connie’s village yet the vast amount of damage, the fact that all of the horses are still safely stabled, and the Titan that could not have gotten there on its own, all seem to point in one direction. Coupled with the knowledge that there doesn’t seem to be any opening in the wall at all, and all signs indicate that the people of Connie’s village somehow spontaneously became Titans. Later, the 104th spot the Beast Titan and witness it scaling the wall — but we know that the Beast Titan is not a normal Titan, and it’s possible that not all of them possess the capability to do so.

The Titan attack just keeps getting weirder as the 104th soon realize that these Titans can move at nighttime, something that Titans had previously been unable to do. If these Titans are the members of Connie’s village — and possibly other villages — what makes them so different from the other Titans? Does it have anything to do with the Beast Titan? Plus, I feel that I should mention that the night scene where they’re searching for the hole was extremely well done. You could really feel the tension, even though — at that point in time — the Corps knew that Titans couldn’t move at night, but they still expected them to appear.

The Survey Corps continues to be hit with some heavy truths in “Southwestward”. When season 2 opened, there was the discovery that the wall contained hidden Titans. Now, Hange and Armin both managed to arrive at the same conclusion — that the wall itself is comprised of Titans who were able to harden their skin the way Annie did. Of course, they still have no idea how or why, and Pastor Nick is no more forthcoming in this episode than he was in previous ones. He is only willing to share one piece of information — that his church has been tasked with monitoring one of the members of the 104th, Krista.

So Krista is somehow important, though we don’t yet know why — important enough that the Order of the Wall has been keeping an eye on her, important enough that Ymir somehow cheated to allow Krista to place in the top ten during training and then attempted to get her to join the Military Police. Could she be a Titan? Perhaps, but then what makes her so special when you factor in Eren, or Annie? And if she were a Titan, wouldn’t she have placed in the top ten on her own merits?

Something is clearly going on with Ymir, as indicated by that brief scene in the castle between her and Reiner. (Judging by the preview for next week’s episode, we’ll get more on that scene later.) And something may be going on with Reiner, too, because I’m fairly positive he lied when Connie asked if he heard the Titan speak.

What did you guys think of “Southwestward”?