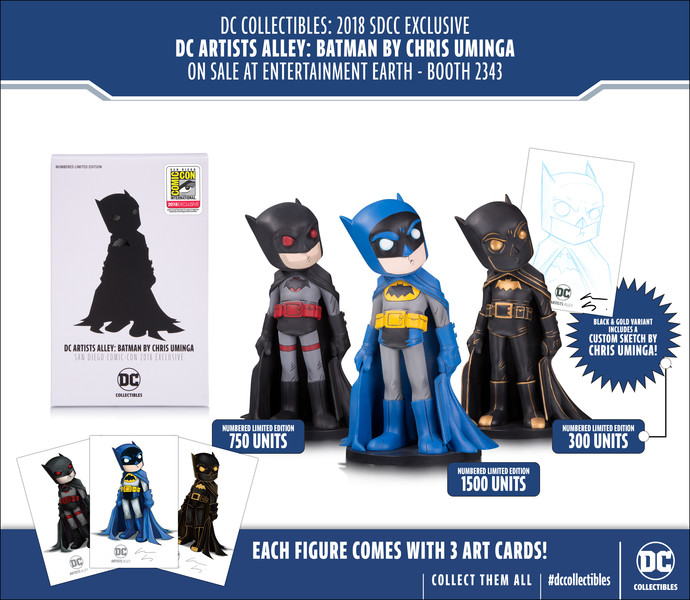 If you are headed to SDCC 2018, you might be able to get your hands on three exclusive Batman vinyl figures from DC Collectibles. Part of DC’s Artist Alley Line, these exclusives have been designed by illustrator Chris Uminga.

Announced by DC Comics, each designer figure is 6.75-inches tall and has been sculpted by Joe Menna and painted by Michael Cowart. Also, each collectible includes three Batman character art cards. The SDCC 2018 exclusive Batman vinyl figures are limited in quantity and will range from $60 to $100 in price.

The classic Blue and Gray variant is limited to 1500 units and will cost you $60 a figure. Fans can see how this variant’s Batsuit resembles the Caped Crusader’s look during the Silver and Bronze Age of DC Comics.

If you want the Flashpoint variant (limited to 750 units), it will cost you $75 each. For those of you who might not know, this version is actually Thomas Wayne (Bruce’s father) donning the Batsuit. He was introduced back in 2011 by Geoff Johns during the famous Flashpoint series which featured an alternative reality.

The Matte Black and Gold variant is ultra-limited with only 300 units and will have a price tag of $100 each. This figure is accompanied by an original sketch of Superman, Wonder Woman, Batman or the Joker by Uminga.

You can purchase these SDCC 2018 exclusive Batman vinyl figures at the Entertainment Earth Booth #2343. I am a fan of all three variants. Batman looks so cute!

Currently available for pre-order, the figures will be shipped sometime in August if supplies remain after SDCC. Go ahead and look at the rest of geek swag DC Collectibles has to offer. Four new statues featuring Harley Quinn, Nightwing, and Batgirl have also been announced for the February 2019 lineup.

You can also read my review of the DC Collectibles Harley Quinn Red, White and Black Injustice 2 statue.

San Diego Comic-Con will run from July 19 to 22, 2018. Members of The Geekiary staff will be attending. Make sure to check out our SDCC coverage and the press panel videos we love sharing with our readers on our YouTube channel.

Will you be attending SDCC 2018? What do you think of these Batman figures? Feel free to share your thoughts with us.