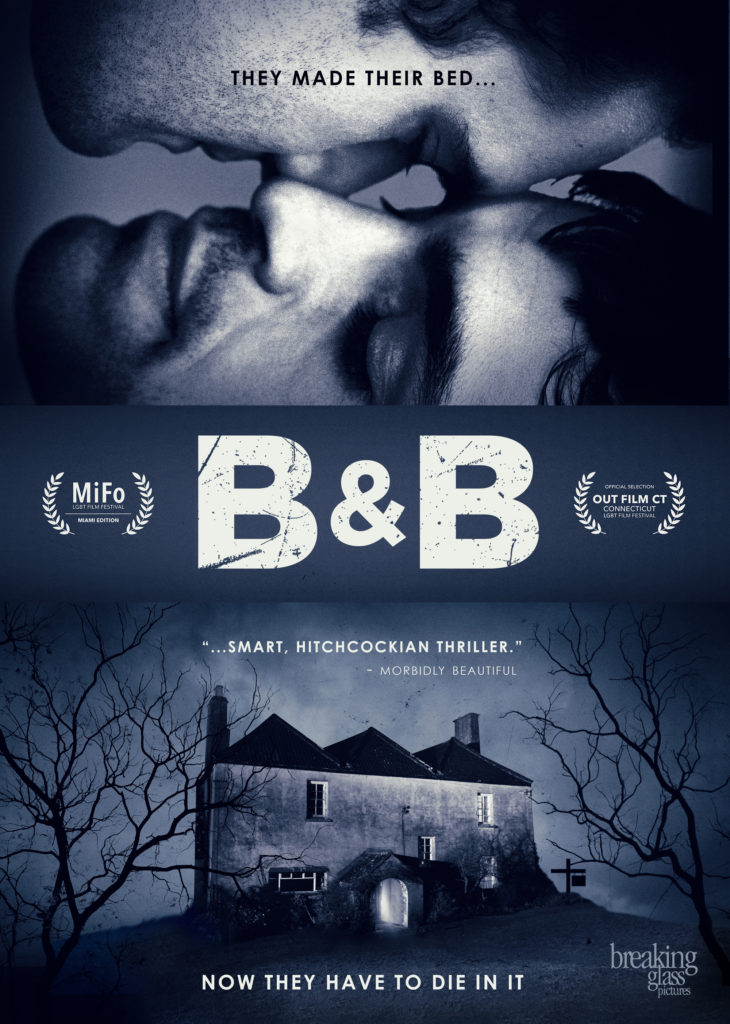 Joe Ahearne’s B&B tells the story of a married gay couple who get stuck in a living nightmare when they decide to exercise the hard-earned right to stay at a bed-and-breakfast.

I was provided a screener of B&B for review by Breaking Glass Pictures for free. The opinions are my own.

If you’re someone who has been waiting for a queer-thriller that isn’t campy, then the Tom Bateman and Sean Teale starrer B&B is for you. No, scratch that! B&B is for anyone interested in a movie that makes use of social fear. The fact that the two leads are a married gay couple is a bonus!

Marc and Fred went to war when they were refused a double bed at a remote Christian guest house. They won their court case and now they’re back to claim their conjugal rights. Triumph turns to terror when a Russian neo-Nazi checks in. Their weekend of fun becomes a bloody battle for survival in this smart, brutally funny and dark thriller.

As I begin writing this review all I want to say is that B&B is an amazing film and you should all watch it. But I guess I have to talk a bit more about this film to do it justice.

It begins with a little catch-up. Marc (Tom Bateman) and Fred (Sean Teale) are a married gay couple returning to a bed-and-breakfast after they won a court battle against Josh (Paul McGann), the owner of the establishment who is too religious to accept queers.

The married couple return to exercise their hard-earned right to stay at the establishment after a year and that’s where things start to go wrong.

One of the best things about this film is that the leads are flawed. Ahearne doesn’t paint Marc and Fred as gay role models. They came back to the bed-and-breakfast to rub their win in Josh’s face, and while it can feel petty, it also makes sense for Marc and Fred to do it. They won and Josh lost a lot of money!

The film begins peacefully enough. There are a few snide remarks between Josh and Marc. There’s also a revelation when Josh’s son, Paul (Callum Woodhouse) tells Fred that he’s gay and the issues he has to deal with because of his anti-LGBTQIA+ father.

The tension in the film elevates when a mysterious Russian stranger enters the picture. Marc and Fred have been expecting some local retaliation. So, Fred thinks that Josh called the stranger to scare them off. As the husbands investigate, a sinister plan starts to unravel that’ll keep you at the edge of your seat. It’s truly amazing!

The themes in this film relate to many problems that the LGBTQIA+ have to face in their daily lives. Many establishments would rather go bankrupt than offer their services to queer customers, and the fear of being gay-bashed is still prevalent.

The film tries to show both sides of the argument. Marc and Josh’s conversations as they try to make the other see sense in their side are impressively intriguing.

I mentioned the characters being flawed and that’s very true in Marc’s case. Even though Fred tries to make him leave, Marc comes across as a petty person. The way he acts is surely going to make you think that he deserves all the bad things happening to him.

However, that’s not to say that Marc is a bad guy. When push comes to shove he does everything in his power to save his husband.

B&B has a very minimalistic budget and thus, it relies heavily on the direction and acting talent. While the entire cast delivers impressive performances, I greatly enjoyed Sean Teale’s skills. Sean is also playing Eclipse in Fox’s The Gifted series and you will surely appreciate his acting range as he plays a very different role in B&B.

In short, B&B offers a thriller that presents flawed characters and relatable queer themes. The only thought in my head during B&B was ‘what’s going to happen now?’. So, I’m sure you’ll enjoy this film, too.

B&B had its premiere at Cinema Village in New York on October 13. A DVD/VOD release will follow on October 17.

Considering the writing, acting, and pacing, it’s no surprise this film went on to win the Best LGBT Film award at LIFF. It was also shown at the ECU Independent Film Festival, Out Film Ct., and MiFo LGBT Film Festival.

If you’ve watched it already, feel free to share your thoughts with us!