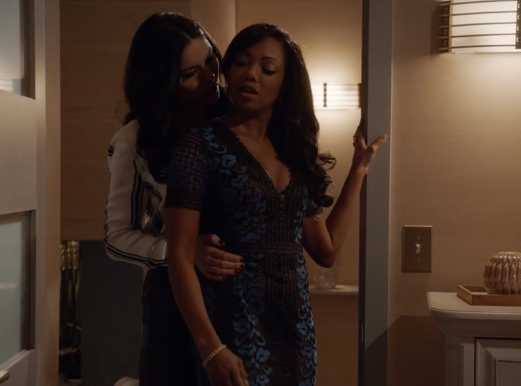 This week’s episode of Hit the Floor season 4 had a lot to take in, especially concerning the fate of the L.A. Devils team. ‘Beast Mode’ also showed just how cunning Eve can be to take down everyone.

I was provided a screener of ‘Beast Mode’ for review. The opinions are my own.

Like I have said before, I am a fan of Eve Vincent. She is going to be one of those characters you love to hate. Of course, James LaRosa might work on redeeming her down the line. However, right now, I am all for a vengeful Eve as she works to destroy the Devils.

I am not sure if she’s the one who killed Pete, but what she tried to do to Jelena this week was cold. The good news is that Jelena had a plan. It was wonderful to see her prioritize being with Miguel over owning a basketball team. While I don’t expect a busy Logan Browning to return to the show anytime soon (maybe she will for the finale?), it is still good to know she found some happiness, even if it’s offscreen, with Miguel.

In a surprising turn of events, Jude became the owner of the Devils, and you know Eve is going to come for him next. I wonder how Jude and Derek will try and work their issues out because of the new power dynamic between them.

‘Beast Mode’ also had a lot of queer scenes. Not only did Jude and Noah hookup again, Eve got it on with Lionel. I don’t remember Lionel having any issues with Olivia and Vincent. So, it will be interesting to see what Eve decides to do with her new love interest as she continues to take revenge.

As far as the ratings are concerned, the season four premiere managed to get a 0.2 rating in the 18-34 demo. Now, I don’t know if that is a great number for a network like BET. Maybe it is? Hit the Floor was the only show from the network that managed to enter the Top 150 cable shows list for Tuesday. So, it has to count for something, right? Sigh! I just want this series to continue for at least a few more seasons.

What did you think of Hit the Floor this week? Did you enjoy ‘Beast Mode’? Let us know.