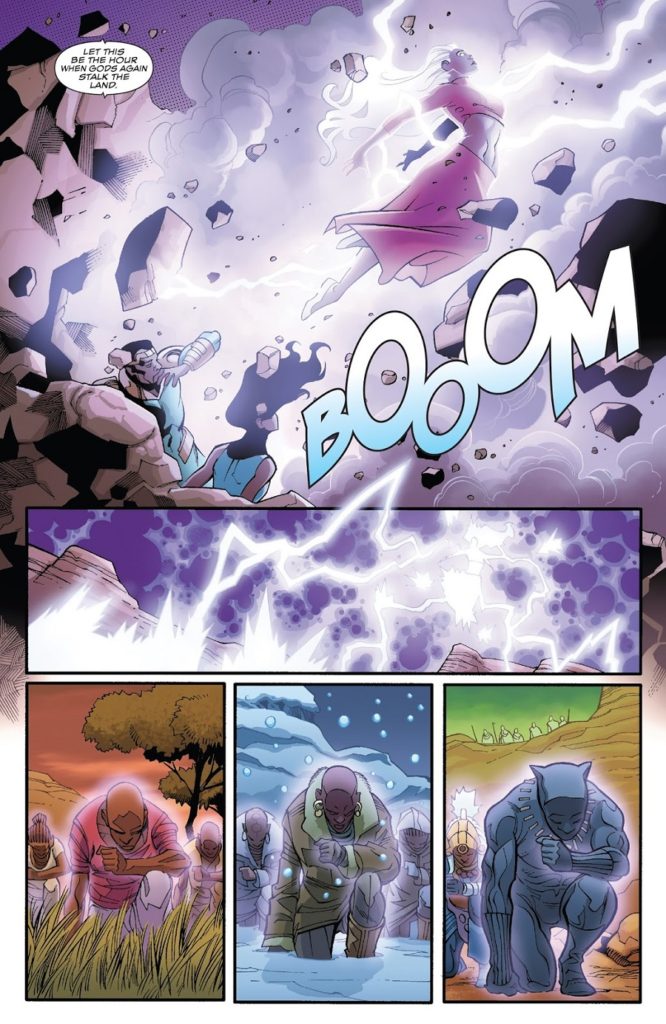 I have been keeping an eye on the current Black Panther comic book series ever since Ta-Nehisi Coates added Storm (Ororo Munroe) as a guest character. I had a feeling he was going to do something incredible with the iconic X-Men, but I was definitely not expecting the turn of events in this week’s Black Panther Issue 172.

Since her debut, Storm has gone on to become an essential part of the X-Men franchise and the Marvel Comic Book Universe as a whole. While Storm is a fictional character, she is also a beacon of representation for many, whether it relates to race, culture, female empowerment, etc. However, not every comic book writer is able to do her justice. And that’s why I was very happy to see Ta-Nehisi Coates celebrating Storm, not just for her power, but also for her African background.

In Black Panther Issue 172, Storm was able to tap into her gift of Godhead, allowing the faith of Wakanda to make her stronger. According to T’Challa, that power (passed down from Ororo’s ancestors) was “more than a mutation.” She used her gift to defeat a demonic being called the Adversary. The issue ended with T’Challa telling Ororo he always knew she was a Goddess and that she just needed to believe in herself. Also, the two mended their relationship during the finale of the ‘Avengers of a New World’ arc.

The marriage between the Black Panther and Storm was a huge deal. Think of it as the ultimate power couple in the Marvel Comic Book Universe. But once the MCU began to grow, fans felt the relationship wouldn’t last. And sure enough, during the events of 2012’s Avengers vs X-Men, T’Challa annulled the marriage.

Ta-Nehisi Coates has been doing a lot to mend their broken relationship in his current run. T’Challa allowed his title as king of Wakanda to get in the way of his true love. During the ‘Avengers of the New World’ arc, he told Ororo he realized how he put her in a cage made of royal duties when she became queen and that he should have done more to accept she was a force of nature.

The two clearly still love each other. So, I’m excited to see where the relationship goes once Coates begins his third arc, sending T’Challa to space. Coates gets Storm as a character. Fingers crossed Marvel confirms his Storm solo-series soon.

Also, if the Disney and Fox merger is accepted, I wouldn’t be surprised if we see Storm and the Black Panther be pushed to the forefront (in the comics and perhaps even in the MCU) as a major power couple.

Talking about writers handling Ororo in comic books, Marc Guggenheim also made Storm a literal Goddess by handing the Stormcaster to her in X-Men Gold Issue 25. While I appreciate the powerup, I’m still waiting for Guggenheim to do more with Ororo in his current run.

Did you read Black Panther Issue 172? What’s up with writers exploring Ororo’s Godhood? Let us know.