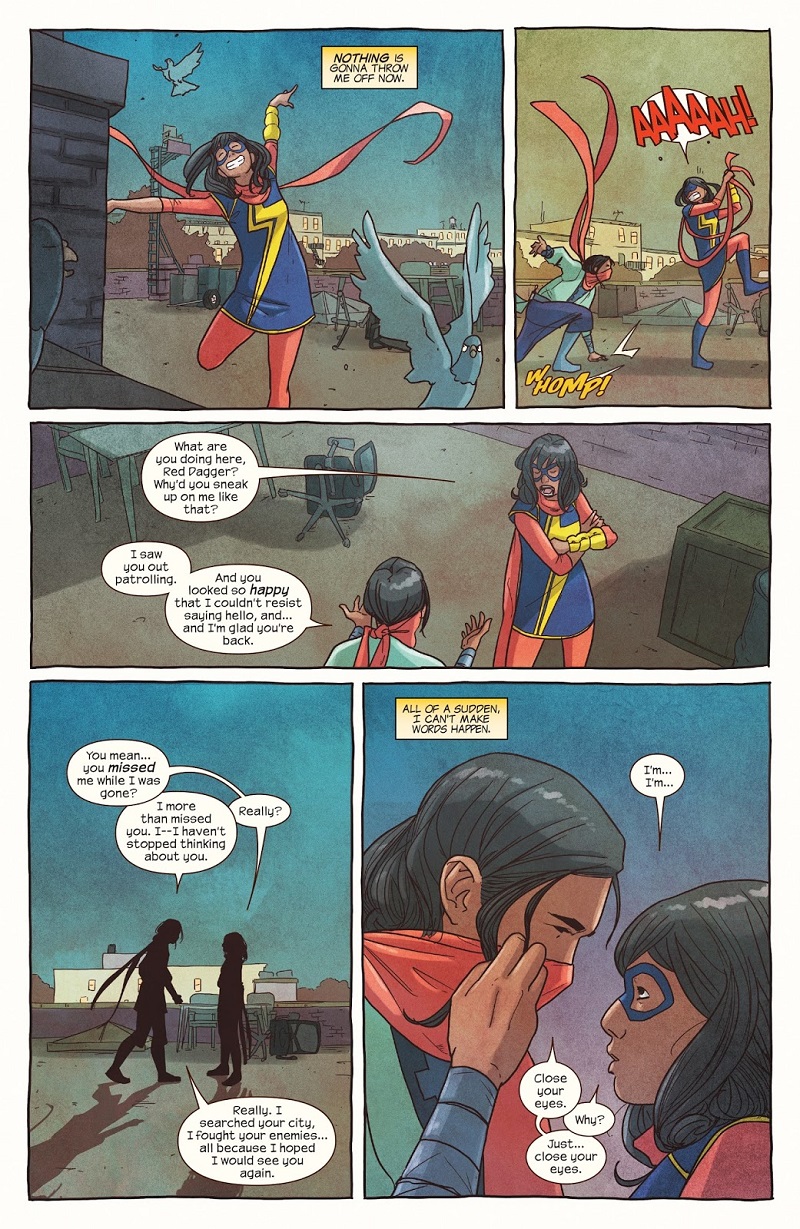 Kamala Khan passed an important milestone this week in Ms. Marvel Issue 29. She kissed a boy for the first time. Or at least, he kissed her. And that’s what I want to talk about, folks. While I appreciate what writer G. Willow Wilson is doing with the character since Kamala’s debut, I think the current situation could’ve been handled differently.

I’m a fan of the Ms. Marvel comic book series. I enjoy reading every issue writer G. Willow Wilson and editor Sana Amanat create for us. That’s why I decided to write this opinion piece, because if I didn’t look forward to reading Ms. Marvel every month, I wouldn’t be spending my time typing all of this.

Ms. Marvel Issue 29 began a new arc for Kamala titled ‘Something New.’ It opened with Kamala becoming an aunt and feeling very happy about it. She then met Red Dagger (Kareem in Pakistan) and that’s when the kiss happened. I get that some fans are happy about Kamala and Red Dagger kissing. However, the way it happened doesn’t sit well with me.

We, as comic book readers, know Ms. Marvel and Red Dagger’s true identities, but they don’t. So, basically, Kamala’s first kiss involved a guy (she fought crime a couple of times with) asking her to close her eyes and then kissing her without asking for permission. Now, again, I get that some fans might think of it as cute. But to me, kissing someone like that isn’t a good thing. Asking someone to close their eyes so you can lean in and kiss them isn’t cute.

This situation made me remember when Kamala and Kamran were about to kiss way back during the ‘Crushed’ arc. And while Kamran ended up being a bad guy, at least Kamala was willing to kiss him and wasn’t told to close her eyes. Sigh!

Anyway, after her kiss with Red Dagger, Kamala went to the mosque and talked to Sheikh Abdullah about it. I really liked how the entire situation was handled. G. Willow Wilson also took to her Twitter to share some more opinions. You should read the entire thread.

2, I’d like to think a mosque is a place you can go to for solace while you’re still growing and imperfect, not a place you shouldn’t set foot in unless you’re already perfect.

Right now, Kamala is stuck dealing with a lot of emotions, which is what makes her character relatable to many. And like I said, I’m not happy about how the kiss took place, but I’m looking forward to seeing how G. Willow Wilson handles the current arc.

Did you read Ms. Marvel Issue 29? What did you think? Let us know.