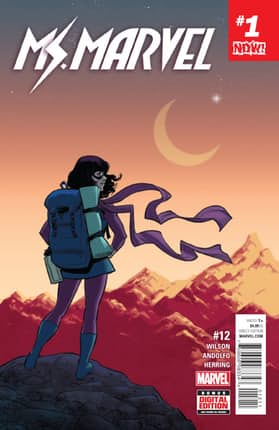 The preview for Ms. Marvel Issue 12 has been released and Kalama Khan is going to Pakistan.

I predicted that Kamala Khan would be coming to Pakistan when the cover for Issue 12 was revealed. The image of the crescent moon and a single star was just too obvious. Issue 12 picks up after the Civil War II tie-in. The whole event has been rough for our young hero. She had to stand against Captain Marvel and she severely damaged her relationship with Bruno.

So, in order to get away from Jersey City, Ms. Marvel decides to travel to Pakistan. Feel free to check out the preview.

It shows Kamala being stopped at the airport because her last name is Khan. It also has a small scene where she and Bruno make eye contact and immediately break away. Those two have a lot to talk about, but I think taking some time alone will help clear their heads a little. Of course Bruno and Kamala will be reunited. But for right now, staying away from each other does make sense.

While I’m excited to see Kamala visit Pakistan, the thing that I’m concerned about is the country’s portrayal. The panel showing Kamala’s arrival at Jinnah International Airport in Karachi didn’t have anyone in t-shirts or jeans. Everyone was either wearing shalwar kameez or some other kind of similar clothing. No one in Kamala’s maternal family was wearing jeans either, as far as I could tell.

I mean, I get that they might want to show the country’s culture in the upcoming issue, but it’s not like no one wears Western clothes over here. Every single man doesn’t walk around in shalwar kameez and not all women cover their heads. Also, not all Pakistanis are brown or dark skinned. We have fair-skinned people over here too.

I’m looking forward to reading Ms. Marvel Issue 12 because I do feel that I might have a lot to talk about once it comes out on 26th October 2016.

Do you read Ms. Marvel? What did you think of the preview? Let us know!

Previous:Screen to Page: A TV Fan’s Guide to Superhero Comics
Next: The Walking Dead 7×01 Review: The Day Will Come When You Won’t Be