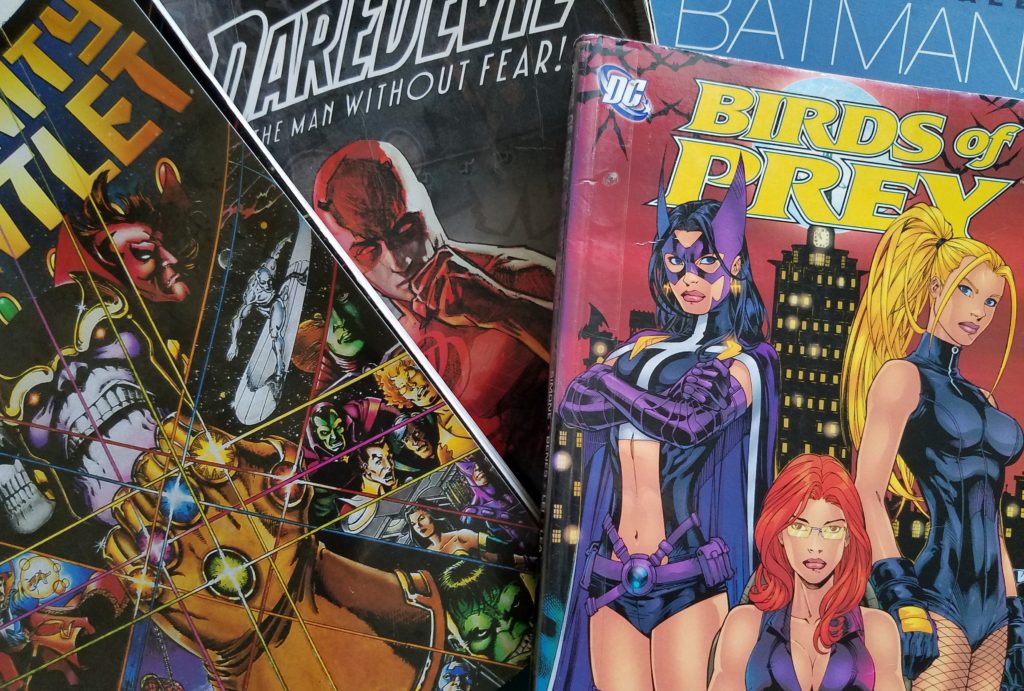 If the new crop of superhero shows makes you want to start reading comics, you’re not alone.

Movie fans are heading to their local comic stores in growing numbers, only to be faced with decades of backstory and a tangle of storylines. Figuring out what to read first can be bewildering. To help you make the jump, we’ve broken down the best books to bridge the gap between screen and page.

1. Supergirl: It’s hard not to like Supergirl. Watching the show is like snuggling up with cocoa and a furry friend after a rough day. What might throw you when you look for Supergirl comics is that her cover identity wasn’t originally Kara Danvers. She used to be called Linda Lee Danvers, and DC hasn’t always treated her very well. If you love the sunny optimistic Kara from the show, you’re best served by reading the current line starting with Supergirl: Rebirth. It’s drawn by Emanuela Lupacchino and written by Steve Orlando. While it’s new, of all her storylines, it is the most faithful to the show’s tone. For those curious about the character’s origins, try The Supergirl of Krypton by Jeph Loeb and Michael Turner. It’s technically issues 8-13 of the Superman/Batman title, but this run served as her relaunch into the DC Verse. One caution: that story is considered iconic, but the art is problematic in places. Be prepared to roll your eyes a few times.

2. Daredevil: Check out the Brian Michael Bendis/Alex Maleev run of Daredevil: The Man Without Fear. There’s a lot of character building and deep dialogue with incredibly well-laid out action panels during fight scenes. The beginning is a little shaky, so if you can’t get into the first book you can skip to Volume 2 without being too far behind on the story. The Avengers make appearances when things get hairy, but Matt is still the star of the book. Be careful not to get the Frank Miller title by the same name or you’ll be in for a serious tone shift.

3. Arrow: The Oliver Queen of Arrow is much darker than the witty bearded blonde from the comics, but there are some storylines that echo the show’s tone. Start with Andy Diggle’s Green Arrow: Year One. You’ll find a new perspective on the infamous Island and its residents. Fans of Black Canary should check out Birds of Prey: Of Like Minds by Gail Simone. It isn’t an origins story, but it does an amazing job of building personalities and showcasing the relationships between team members.

4. Marvel’s Jessica Jones: Brace yourselves: Jessica Jones: Alias by Brian Michael Bendis is arguably better than the TV show. It explores the lives of people with superpowers that fall below the level of stars like Captain America or Thor – the ones who are super but not “super enough”. The tone is dark but humorous, and the dialogue is always engaging. It can be too dark for some – there is a lot of language and some sexual situations. Still, if you’re a fan of the TV show you’ll feel right at home with Alias. One major change: Carol Danvers (AKA Captain Marvel, who has a movie coming up in 2018) is Jessica’s best friend and confidante instead of Trish Walker.

5. Gotham: The show is more like traditional Batman comics than most of the movies, at least when it comes to theme and mood. This is good news for future comics fans; you can pick up most Batman stories and have a good time. We recommend Batman: Earth One by Geoff Johns and Gary Frank. It features an early Batman who is still honing his legend. The storyline is outside the main DC continuity, so you don’t have to understand ten thousand minor plot points to enjoy the book. Bonus: this is the title that inspired Gotham’s version of Alfred.

Fans who are already comic readers, what you do you think of our picks? Post your suggestions in the comment section below.