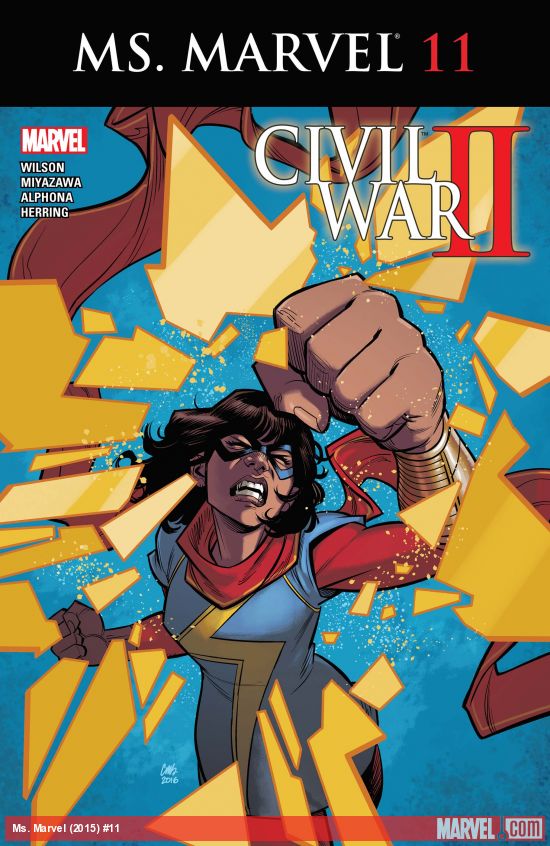 The Ms. Marvel Civil War II tie-in has been testing Kamala Khan ever since the start of the current arc. Issue 11 wasn’t any different and I can’t wait to see where Wilson takes the beloved teenager next.

Even though Ms. Marvel tried to understand Captain Marvel’s support for Ulysses’ visions she just couldn’t side with her. For Kamala, putting people in jail before they even commit a crime isn’t right. After Bruno got into a serious accident we see Kamala come up with a plan to prove that Ulysses’ predictions can be tampered with.

The issue is full of little character moments that I really enjoyed. It opened up with Bruno having a conversation with Kamala’s mother about the Khan’s family jewelry. We finally got to know how Kamala’s gold bangles were welded together to serve as a kind of armor as well as provide a small space for our hero to carry her stuff in. I also liked how close Bruno is to the Khan family. They think of him as their own son and that’s why the final panels packed a lot of emotional punch (but I’ll get to that later).

Adrian Alphona and Takeshi Miyazawa did the art for the issue. The art style of both artists complements each other and it can take some time to figure out which panels were drawn by whom. I don’t know if their art style would work for other comic book series that I read but it sure works very well for Ms. Marvel because of the subtle humor they’re able to show.

In order to prove her point, Kamala called both Captain Marvel and Tony Stark. However, Carol’s trust in Kamala was gone the moment Tony arrived. Seeing Ms. Marvel try to hold her ground in front of her superhero idol was gut-wrenching. Tony tried to comfort Kamala but the damage was done. Ms. Marvel’s relationship with Captain Marvel has ended and I can’t wait for them to reconcile down the road.

Speaking of relationships, Bruno also ended his friendship with Kamala. Our young hero has been so busy with saving the world that she hasn’t been paying attention to her friends. Bruno warned Kamala that siding with Captain Marvel was wrong but Kamala not listening to him cost him dearly. The current arc served as a more mature take on superheroes and relationships in general. Things don’t always turn out how we want them to and learning from our mistakes is part of growing up.

In the end, Kamala lost the woman she looked up to along with her best friend. The next arc will definitely be about Kamala Khan trying to figure out who she is as a person now that almost everything has been taken away from her.

I love it when heroes are broken down and their persistence allows them to come back again as better versions of themselves. That is why I can’t wait to see what G. Willow Wilson does with Kamala. Will she be able to rekindle her friendship with Bruno? I sure hope so. However, until then it is important for Kamala to grow up and begin to better understand the world she lives in.

What did you think about Ms. Marvel Issue 11? Let us know!