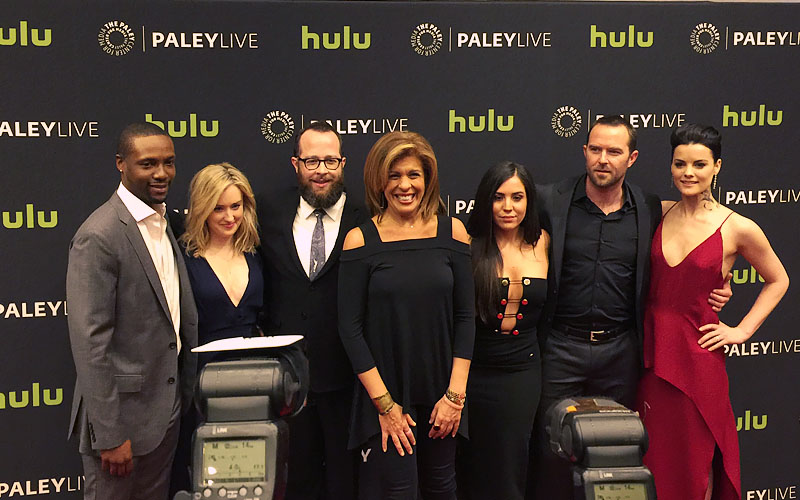 The cast of NBC’s Blindspot, along with creator Martin Gero, were at The Paley Center for Media in NYC on Monday, April 11, for a preview screening of the most recent episode and a panel discussion.

With a conspiracy-thriller aspect and new puzzles each week, Blindspot is both mytharc and emotion-driven, featuring a team of FBI agents who rely on each other like family yet keep their own secrets on top of the main mysteries. While there’s no supernatural aspect so far, the series hits points that would appeal to fans of series like The X-Files, Agents of Shield, or Alias. The series has elements of law enforcement procedurals, yet with high emphasis on the ongoing mythology and the personal arcs and conflicts of the FBI agents.

Read on for highlights from the Blindspot panel (moderated by Hoda Kotb), including behind the scenes tidbits, why the cast wanted to do this show, and more about Jane Doe’s tattoos.

The show centers around Jane Doe (Jaimie Alexander), a woman found in Times Square with no memory and her entire body covered in tattoos. One of the tattoos contains the name of an FBI agent, Kurt Weller (Sullivan Stapleton), who has his own personal link to Jane in his history. Field agents Edgar Reade (Rob Brown), Tasha Zapata (Audrey Esparza), and Patterson (Ashley Johnson), the team’s techno wizard who can do math in her head, round out the team, along with their boss, Bethany Mayfair (wonderfully played by Marianne Jean-Baptiste, who was filming and unfortunately had to miss the panel), who is fiercely protective of her agents.

The episode screened at the panel, which aired later that night, focused on Patterson, who had to fight her way out of a perilous situation. The story required the actress to run around in the woods barefoot in the snow. Ashley Johnson revealed that she had the flu while filming, a tidbit which will make rewatching feel even more fraught.

Creator Martin Gero said that the cast were all first choices, and that he was proud of the pilot script and felt optimistic about getting a season 2 from the get-go. Gero’s regard for the cast and the rapport they all have together showed in the panel—it was easy to see why the ensemble works so well.

Sullivan Stapleton said he thought Blindspot looked like a good show, and he wanted to film in New York. He added that his mom loved the script, which also made him give it more attention.

Wearing a tattoo on her neck leftover from the day’s filming, Jaimie Alexander noted she’d been up since 4 am. She explained that Jane Doe’s neck tattoo gets applied on Mondays and she wears it all week. The makeup artists add other tattoos as needed for each episode.

Regarding a recent kiss between Jane and Weller, “It went well,” said Stapleton. “He’s a gentleman,” Alexander added. “What is it, Jeller?” The cast was aware of fans shipping the two characters, but didn’t have any spoilers or hints to offer.

Rob Brown said when he read the pilot, “first ten pages, instantly I wanted the opportunity” to be a part of the show.

Gero discussed the audition process, and said it was challenging to cast Patterson, Zapata, and Reade, because in the pilot, most of the screentime is with Jane and Weller, and there wasn’t as much material for the others as what develops later on. But, Gero added, Johnson, Esparza, and Brown “brought so much of themselves” to the characters, and that made finding the right fit for them easier.

Esparza’s mom also read the script. The actress was behind on her reading, but her mom read it and told her “you have to go for this.” Esparza said she messed up her lines in her audition.

Brown said that he asked for another take because he “really wanted to nail it.”

On the rapport of the ensemble cast, Stapleton said, “we all support each other.” 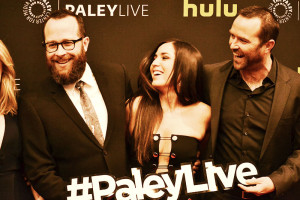 Gero spoke warmly of Executive Producer Greg Berlanti, and how making a tv show should be a joyful process, “not just about the 43 minutes,” and that he felt the cast was a major part of making that happen.

On a show with so many mysteries, her own character being the biggest one, Alexander said she doesn’t want to know too much ahead of time and doesn’t read too far in advance. She reads her scripts at the last minute.

Of all the group, Gero admitted he’s most likely to accidentally spill a spoiler, while the cast is really good about not letting things slip.

An audience question brought up Stapleton’s propensity for swearing and Gero joked that “the gag reel on DVD is just Sullivan swearing.” He added that NBC is very open to whatever they’ve wanted to do on the show, but they still aren’t allowed to use 4-letter words on the air.

Alexander explained that part of her inspiration for finding the character of Jane was the saying “confidence is silent. Insecurities are loud,” and discussed how Jane is more focused when she knows what she’s doing. 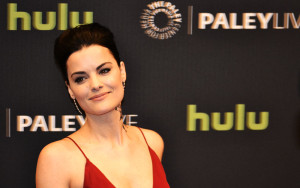 Johnson does research for the science and computer knowledge her character uses to solve cases and save lives, and said she learns new things from each episode. She later mentioned being a fan of The X-Files and always being interested in forensics. Johnson thought she would work more with dead bodies on the show, but that didn’t turn out to be the case.

On filming in New York City, Gero said the city was a character in the pilot. While some shows filmed in NYC aren’t actually located there in-story, Blindspot is, and that appealed to him as well.

Esparza recalled that “the closest I’ll ever come to being a Beatle” was when they went back to Times Square to film and a lot of people gathered to watch.

On casting Kurt Weller, Gero said it was an especially difficult balance. They wanted to find someone who could be “amazingly vulnerable” yet also “punch a guy out” and they found that combination in Sullivan Stapleton.

Johnson said that for the first few episodes, she panicked because she couldn’t understand Stapleton’s Australian accent, but now she’s so used to it she translates him for others.

Concerning the Reade and Sarah break-up, Brown said “it had to be done” but Gero chimed in that there was “a lot more Sarah to come,” referring to Kurt Weller’s sister, who recently became romantically involved with Agent Reade.

As for the title of the show, Gero explained it refers both to Jane Doe’s lack of memory, and to an emotional blindspot. “Kurt was so laser-focused on things,” Gero elaborated, but when he found Jane, it made him more vulnerable, and affected his judgment.

Blindspot airs Mondays on NBC. Keep an eye out for more in-depth interviews with cast members and the creator from the Paley Center event, to be posted soon.

Previous:‘The Jungle Book’ Movie Review: An Entertaining Retelling of a Classic Tale!
Next: Have You Seen the Trailer for “Doctor Strange” Yet?