The two-hour season finale of iZombie was fast-paced, intense, and heart-stopping. Between “Dead Beat” and “Salivation Army”, the second half of season two ended completely satisfying–until the last few moments.

WARNING! There is a lot of talk here about the finale episodes, so read at your own risk if you have not yet watched!

Let me start by saying that the first episode, “Dead Beat”, was nearly flawless. It followed in the footsteps of the past several episodes of being suspenseful, emotional, and actually moved the plot forward. For me, the highlight was when Liv finally told Clive the truth about everything. Even though I have been hoping for it since last season, I was still surprised at how that entire scene went down, but it was amazing. Malcolm Goodwin did a great job of portraying confusion with just the right amount of “WTF” and Twitter was full of screen shots of his facial expressions. I am just so glad that the writers decided to finally let Clive in on the zombie secret and that Liv did it for an important reason. I am also super glad that the writers did not make Clive into a zombie in “Salivation Army” which I really thought they were going to do. I am okay with being wrong in this instance.

Another one of my favorite aspects was the continued friendship between Liv and Major. Earlier in the season when the two teased about getting back together, I really was not a fan of that arrangement. Getting to see them as close friends by the close of the season, however, has been a pleasure. I can finally see the chemistry between Rose McIver and Robert Buckley that I have been missing from prior episodes, and I need to applaud the writers for pushing their relationship in the direction of “just friends”.

Let me interject here and talk about the part of the finale that I hated. Yes, hated. I hate that they killed off Drake. Not only did we have to fall in love with and lose Lowell in season one right along with Liv, but we had to do it again in season two with Drake. I understand that being a zombie and dating a zombie comes with a certain amount of collateral damage, but at this point, we have had to endure the loss of two great characters, and really strong support for Liv. There are few shows that can boast the success of having a main character fall for a recurring character and make it work, and yet iZombie has done it twice. I am not sure why the writers think it is necessary; Liv has enough to deal with that she does not to mourn the loss of her boyfriends. And making her be the one to kill Drake? Ugh, that one hurt, writers. It also seemed very out-of-character for her to get over the death so quickly, even though she did it to save Cliv 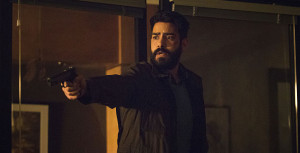 e. Instead, she went on saving the day as though nothing had happened. I found this strangely out of place. If the writers choose to give Liv a love interest next season, I will be crossing my fingers, toes, arms–everything!–that they do not kill off another boyfriend.

OK, onto more good parts of the episode. Of course, we cannot skip Ravi. And let me say that Ravi was an absolute star in the episode. I have never seen Rahul Kohli do better work. After accidentally killing the guy from Max Rager, he was absolutely distraught, and it was very well executed. When he learned about Peyton’s hookup with Blaine, you could see the pain across his face. There is just a lot of layers to Ravi and Kohli is able to pull them off effortlessly. And even through all of that pain, he still lit up with excitement at the chance of helping Blaine go after Boss’s men  to show off his gaming/target skills.

There are a few loose ends that I am looking forward to having resolution for next season. The first is with Blaine. We still don’t know for sure if his memory is really gone or if he is totally faking it. I was on Team Real until these episodes, and now I am on Team Fake. There is just something about the way that David Anders was playing him that made me think he was back to his old tricks. Plus, knowing all about Boss and the secret stash of ammo and guns at Shady Plots seemed, well, shady. I also want to know what happened to Don E! He isn’t the greatest character in the world, but I love that guy (and RIP Chief!). Also, even though Blaine shot up Boss’s office, Boss is still alive, and I am sure that he will back next season to stir things up. And, of course, what is up with this new lady, Vivian? She clearly is going to be the new antagonist upcoming in season three, but I am interested in learning more about her.

Overall, I loved loved loved this season finale (except for the Drake part which I really didn’t love). All the actors were at the top of their game, the writing was solid, and there was enough cliffhanger to leave me wanting more, but was balanced with a great amount of information share. And who else loved the “Eeny meeny miney moe” part in the Max Rager basement. Perhaps a shoutout to that other zombie show, The Walking Dead?

What did you think of the finale episodes of iZombie or season two as a whole? What is in your season three wish list?

Previous:Kawaii Kon: The King of Honolulu Geek Conventions
Next: ‘The Jungle Book’ Movie Review: An Entertaining Retelling of a Classic Tale!