Boku no Hero Academia: Heroes Rising left me speechless at multiple points, but also filled me with delight in the quieter character focused moments.

First and foremost, if you are looking for fluffy happy feels, this movie has it in abundance.  I was delighted to see Class 1-A working together as true heroes and totally killing it like the pros that they will someday be.  There’s a moment for fans of practically everyone (except for a few teachers, sadly), so you’ll have plenty of opportunities to cheer on your favorites.

I had a hard time sitting still and not applauding every time a character I love did something even slightly cute or emotional.  As a Todoroki stan, his moments got me particularly hard.  I love that dual-color haired child and he did his best here.  Someone hug that kid, man. 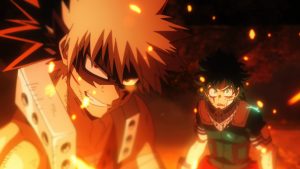 The film is, however, primarily Deku and Bakugo focused, so if either of them are your top favs, you’ll have even more of a chance to cheer.  And, while it’s not my ship, BakuDeku shippers have been particularly delighted with the character interactions.  As it’s not my ship, I can’t really comment on just how awesome those scenes are, but if Twitter is any indication, you’ll love it.

Go forth, shippers, and do your thing.

(Your Ship Is Not My Ship And That’s Okay)

Side note: my ship, EraserMight, even had a moment in Heroes Rising, which I wasn’t expecting.  Considering Aizawa was completely absent from the first film, I consider this a wonderful bonus in Heroes Rising.  Three cheers to my fellow EraserMight stans!

It’s hard to be a teacher stan sometimes.  We are often a sort of secondary part of the fandom so we take what we can get.

That said, RIP to all those teacher stans whose favorites didn’t get any screen time.  But again, we are kind of used to that by now.  The students are the protagonists.  At least we have our fandom spaces to go full fangirl in. Catch me over on Twitter, all you teacher stans.

But back to Bakugo for a moment.  His plot was particularly surprising and absolutely jaw dropping.  I can only assume that the quirk transfer bit was the part the director was referring to when he said the film had something Horikoshi planned for the end game of the series. I may have been caught in a loop of muttering ‘oh my god oh my god oh my god’ under my breath as that played out on screen.

I was honestly stunned that they went that route.  I thought that somehow they were about to pull a Ned Stark-style twist on us and end the protagonists’ story arc early.  I am aware that there’s lots of story left to tell (I’m mostly caught up with the manga at this point), but we don’t exactly know when this story takes place.  At one point we can make the assumption that it’s winter in Tokyo, but that still leaves some questions about how far into winter it’s taking place.  It could have very well been post manga.

That said, the movie retconned their own surprise twist and keeps One For All with Deku.  The jaw-dropping plot twist has basically no impact on the primary story playing in in the manga and anime series, so you can continue to enjoy those without ever seeing the film.  The same could be said of the first film, but that was significantly less plot twisty.  Granted, that film did give rise to a powerful fandom ship (DaveMight shippers RISE!), but outside of fandom spaces, it doesn’t really affect anything in the main story.

Will Horikoshi stick with this plot point as his manga barrels ahead towards its potential ending?  I have no idea.  Maybe he has shifted ideas for where he wants it to go and wanted to get this out there anyway, so retconning it was the only way he could do that.  Or maybe he was pressured into doing something dramatic now and had to pull the trigger on this plot point.  I have no idea.  But here we are.

I only hope this doesn’t indicate that the manga and anime may start to diverge, because I totally hate when that happens. 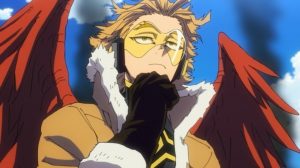 Speaking of the manga.  WE GOT HAWKS IN HEROES RISING!

I feel that my theater was mostly anime-only folk because I was the only one who freaked out when he appeared on screen.  Then again, maybe I just went too fangirl in general and other people know how to friggin’ contain themselves like adults in the movie theater.  Yeah… probably the latter actually.  Almost definitely the latter.  But I digress…

Hawks is one of the most popular BNHA characters that only a segment of the fandom (manga readers) is crazy obsessed over.  Once you actually get to know him, you’ll see why.  He’s got a cool air about him in general, but he is absolutely a hero with his heart in the right place.  His motivations and commitment to the cause are solid.  He’s the whole package.  And that’s basically the big reason he’s a fan favorite.

Besides his cool vibe, we don’t get too much of his deeper personality in this film, so I’m hoping the anime will expand on this very very soon.  He has made an appearance in the anime series, but there’s a lot more to him than we’ve seen in any animated form so far.

Like, he’s not even in my top five favorite characters, guys, but I still want anime-only folk to know him better.  He deserves the love.

Overall I enjoyed the film.  I’m not sure if I’d have enjoyed it more if they got bold and didn’t retcon the twist, or if I’m happy that the main series can remain untouched.  Verdict is still out on that part.  But I still enjoyed it, even with that bit in question, and I would watch it again in a heartbeat.