My Childhood Makes a Comeback as Care Bears Return to Comics 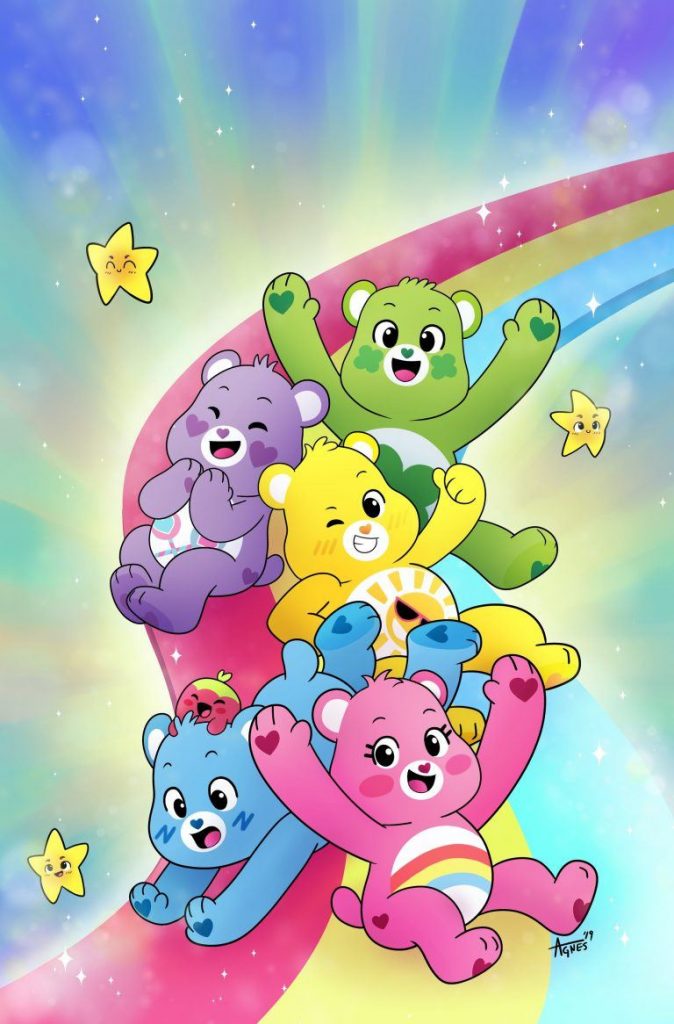 Like many children of the ’80s, my childhood bedroom looked like it manufactured Care Bears. I’ve been collecting those cute little do-gooders since the age of 2, so I was pretty jazzed to learn that a new Care Bears comic series is going to be released this summer.

IDW Publishing announced this past weekend at WonderCon that they will be launching a new Care Bears comic series in conjunction with Cloudco Entertainment. The new comic will expand on the latest animated incarnation – Care Bears: Unlock the Magic, which streams on the Boomerang app – as well as feature new content. Unlock the Magic follows the adventures of Grumpy Bear, Funshine Bear, Cheer Bear, Share Bear, and Good Luck Bear as they seek to protect the land of the Silver Lining from Bluster and his Bad Crowd.

Welcome to The Silver Lining in Care Bears #1 – a mystical realm full of mirth and magic! The Care Bears, along with their pals the Whiffles, protect this realm from the negative influence of the mischievous Bluster and his Bad Crowd! With engaging, unique characters and an irreverent and heartwarming sense of humor, this new comic book is perfect for anyone looking for more magic in their lives!

The new comic will join IDW’s other properties such as Hasbro’s My Little Pony, Scholastic’s Goosebumps, and Marvel’s various superhero properties and help grow the company’s already sizeable chunk of the youth/all-ages market. Said John Barber, Editor-in-Chief of IDW Publishing, “Care Bears has been a touchstone for generations. I had their toys and stuffed animals when I was a kid, and my daughter has them now. They’re characters parents and kids get to share — and just like the Care Bears: Unlock the Magic animated series, our comic brings them into modern times while staying true to the characters we love!”

President of Cloudco Entertainment (formerly American Greetings Entertainment) Sean Gorman said in a statement, “We’re thrilled to be collaborating with IDW Publishing on a new comic book series that will appeal to Care Bears fans of all ages. Care Bears #1 introduces fresh content to our heritage fans while creating a new and exciting world for young fans to explore.”

Illustrating the new series is veteran Agnes Garbowska (My Little Pony, DC Super Hero Girls). “I am extremely excited to be working on Care Bears since it was such a huge part of my childhood and impacted me greatly. I hope the series brings the same love and joy to new fans as it did for me,” said Garbowska. The comic will be written by Matthew Erman (Long Lost, Bonding) and Nadia Shammas (Corpus).

The first issue in the series, expected to be released sometime this July, will feature a cover by Garbowska and a variant edition by Tony Fleecs (My Little Pony).